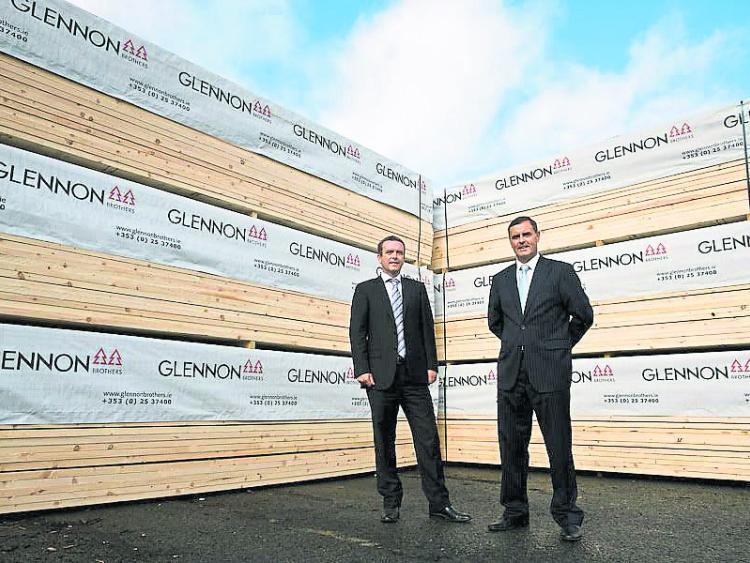 The Joint MDs of Glennon Brothers, Mike and Pat Glennon

Scores of jobs in Longford and operations at local timber giant Glennon Brothers are at risk because of an escalating backlog in forestry license applications, it has been claimed.

Senior bosses at the Longford based firm warned of the grave consequences facing an industry which is now facing arguably its biggest challenge in several decades.

Managing Director Pat Glennon said the situation has become so acute, the company has been forced to import logs on an almost daily basis in order to keep sustainability levels going.

Mr Glennon blamed the unrelenting crisis on changes to legislation in 2017 which opened the floodgates foranti-tree felling activists to “object left, right and centre” thereby causing lengthy delays in the processing of licenses.

The Longford businessman said the fallout has already coincided in the firm having to lay off seven harvesting crews over the past number of weeks with the threat of further cuts a distinct and looming possibility.

“We have been importing (logs) from Scotland for the last 50 years and in the last two to three months we have had to treble our imports.

“In normal circumstances, we would have a standing stock of 100,000 cubic metres, but we don't have that stock now, there's no cushion.

“If things keep going the way they are then we will have to start laying off people.

“We are on the breadline and it's hand to mouth now,” he added.

Mr Glennon said had it not been for the company's ability to rely on its Scottish based market, its sawmills would have been staring at possible work stoppages and putting staff on two and three day weeks.

And, in a strongly worded plea to government chiefs, Mr Glennon said the time for clear and unequivocal action was long overdue.

“The fundamental facts are that there were 56,000 hectares approved last year and there is 16,000 this year. It doesn't matter how they (Department of Agriculture) dress it up, they are the facts of the matter,” he said.

“The thing is the (timber) market is strong, the logs are there and just because the Department can't get their act together we then might have to lay off staff and that doesn't sit well with me at all.”

IFA President Tim Cullinan said that while it was important that Minister for Forestry Pippa Hackett issued a statement last week to clarify the full extent of the backlog in licences, he said the actions announced by the Minister would not solve the crisis facing the sector.

“The scale of the backlog is staggering with 4,700 licences now stuck in the system. Radical action is needed to address a crisis that is bringing the sector to a standstill,” he said.

“The Minister must give a clear commitment on how soon the Department will be in a position to comply with legislation which says licences should be issued within four months.

“Many people are now waiting for over two years and their crop is being devalued,” said Mr Cullinan.

He added, “Farmers must to be allowed to put in roads, to thin, and to manage their timber crop.

“We have a timber crisis in the country and we need action now.

“It is all well and good to be allocating additional resources, but this is not going to solve the problem, which is that the licencing system is no longer fit for purpose and needs to be reformed.

“The Minister must find a way of giving an amnesty on existing application for roads, thinning or felling which are in the system for over four months.”

The Tipperary farmer said it is completely unacceptable that people are given a licence to plant forestry and then are held up for years waiting to be allowed to manage their timber crop.

“It’s a complete abuse of the private citizen,” he remarked.