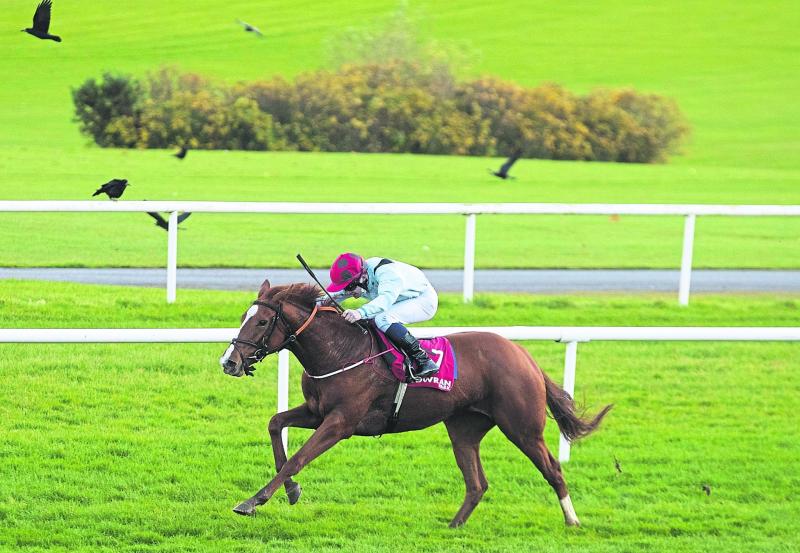 Too easy for the Paul Flynn-trained MK Drama and Luke McAteer at Gowran Park on Wednesday PICTURE: Patrick McCann/Racing Post

Colehill trainer Paul Flynn sent out the easiest winner of the day as MK Drama landed the concluding 8f handicap at Gowran Park on Wednesday last.

The strong 4/1 favourite got to the front under Luke McAteer early in the straight and raced to a five and a half-length success over the Tony Martin-trained Jungle Jungle.

Flynn said, “It was due but in fairness she’s only had that heavy ground to race on twice and was only beaten a head in Limerick. The ground is the biggest factor. It’s great to win for the owners Paddy McGuire, who is my vet, and Pat Kelly as she is a full-sister to Endless Drama which was second in the Irish 2,000 Guineas. She will probably run next year and we’ll put her in foal at some stage.”

Shercock, County Cavan trainer Patrick Magee was among the winners at Sligo on Friday afternoon. He won the mares’ maiden hurdle with the Black Steel Square Syndicate-owned She’s All Vintage which scored a five-length success over the 6/4 favourite, Call The Fairies under Ryan Treacy.

Other Racing News: Jim Bolger landed his first Group 1 success in three years when the Kevin Manning-ridden Mac Swiney saw off 6/4 favourite One Ruler to win the Vertem Futurity Trophy Stakes at odds of 12/1 at Doncaster on Saturday. On the same afternoon, the Aidan O'Brien-trained Van Gogh won the Criterium International under Pierre-Charles Boudot at Saint-Cloud in France. On Sunday, Joseph O'Brien’s Baron Samedi won the Group 2 Prix du Conseil de Paris at Longchamp under Mickael Barzalona.