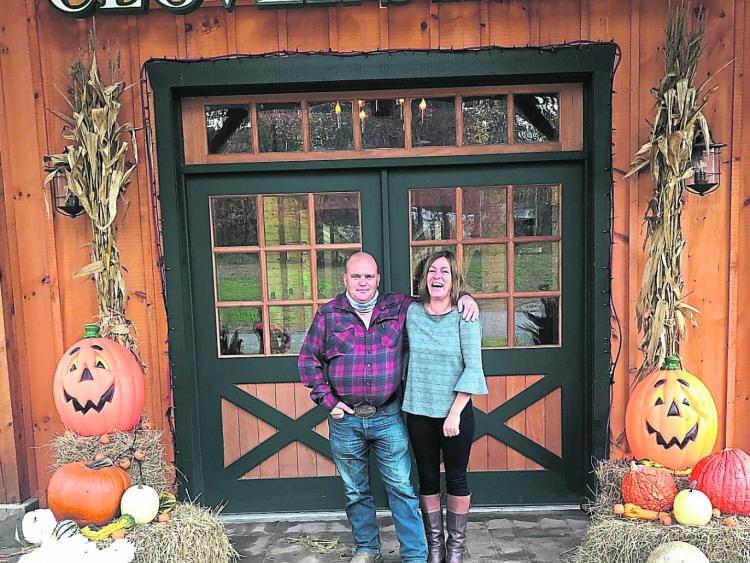 Jim Cassidy and his wife Rosie outside Clover Stables

If ever there was a classic fit to the oft used stereotype of ‘local boy does good’ then multi millionaire businessman Jim Cassidy is it.

The Ballinamuck construction magnate and the brains behind one of the leading and most successful building firms in New York carries none of the airs and graces or notions of grandeur you might otherwise associate with high flying tycoons of the father of three’s ilk.

Rather, the amiable 46-year-old is all too aware of where those successes came from and just how hard he was made to work for them.

“I was always a hustler,” said Jim, as he took time out to speak to the Leader from his home in the leafy terrains of Orange County.

Much of those surrounds carry familiar memories for the son of the late Margaret and Paddy Cassidy and from the assiduous family farm beginnings he grew up on.

A past pupil of Kiltycreevagh National School, Jim would later go on to enjoy a spell at Moyne Community School.

By his own admission, academia was not Jim’s passion. What was, and unequivocally still is, is Jim’s deep seated ambition for success and personal fulfilment.

“It wasn’t my thing,” said Jim, when the topic of studying was put to him.

“When I left I went to work with Fenelon Engineering and worked for Mick Fenelon, one of the decentest men you could meet.”

That stint, according to Jim, last “three to four years” before deciding to take his first entrepreneurial punt on setting up a small steel company.

Like most, if not all, fledgling firms, there were difficulties and plenty of them.

Difficulties in securing payment from farming clients meant the business never took off the way the forward thinking north Longford native had envisaged, resulting in him selling off his machinery and giving into the inevitable.

“It was an absolute disaster,” recalled Jim, as his focus soon switched to potentially more financially palatable foreign lands.

“I left after that. I wanted to go to the US and then Australia after but I’m still here.”

In keeping with the scores of Irish ex-pats who emigrated to the US, Jim cut his teeth in the transatlantic construction game working as a foreman.

“I remember I was working for a sub contractor and the job was an absolute disaster.”

For most, the bitter disappointment of yet another career making or in this sense career breaking turn of events would have proved too much, but for Jim his saviour would come courtesy of a man he credits with giving him his first “big break” in business.

“Ken Horne was the guy behind Alchemy Properties on the last job I was on and he took a shine to me I suppose you could say.

“He was the guy that asked me to do my first job and at the time I had four men with me. I can remember going into Ken’s office and setting out the price for it which came to $1.5m,” he said.

That was 18 years ago and despite once again running into credit troubles along the way, it was the breakthrough Jim had been desperately yearning for, a lightbulb moment which promulgated him among the who’s who of New York’s rich and famous.

His company Cassway Contracting, which specialises in the interior fitting out of high rise buiildings across the New York landscape is worth a cool $25m.

But that’s not all. Jim is also the driving force behind Cassidy & Sons, a real estate company and is presently working on a 60 storey building for Larry Silverstein, the owner of the World Trade Center.

Fast forward the best part of two decades, the genial Longfordian is now dipping his toes in the lucrative world of America’s equine industry.

“We hit rock too and had to lower the site 6ft at one side and 6ft at the other side. It was crazy, but hey, we got there in the end.”

“We didn’t get to do a proper opening of our showbarn because of Covid,” lamented Jim, adding that his hope was for Clover Stables to be officially unveiled next April.

In the interim, Jim and Rosie are hoping to offset that disappointment by hosting a two day socially distant Classic Horse Show this weekend (October 31-November 1).

Cash prizes in ‘Hunter’ and ‘Jumper’ classes alongside childrens and adults costumes are up for grabs in what promises to be an occasion which will attract a wealth of interest from across the equine divide.

“We have put a good deal of planning into this and it should be a great couple of days,” added Jim.

From the evidence of what he has achieved over the past two and a half decades, who could argue with that?