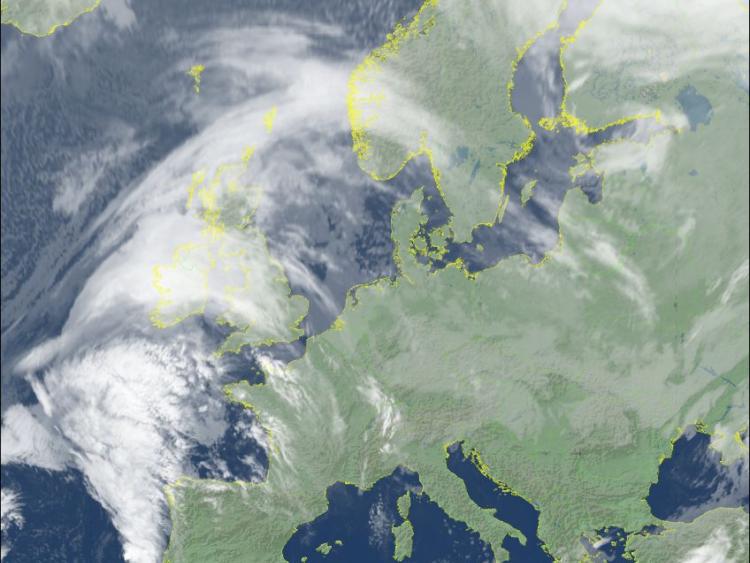 Met Éireann says Leinster counties are under a Status Yellow weather warning with heavy rain sweeping the country on Monday and Tuesday.

The updated warning issued on Monday morning for Leinster counties says there will be heavy rain at times Monday and Tuesday with a risk of local flooding.

The warning is valid from 11am on Monday to 3pm on Tuesday.

A similar alert is in place for Munster, Connacht, Cavan, Monaghan and Donegal but higher rainfall levels of 30-50mm expected are expected in those regions.

It is also valid until 3pm on Tuesday.

It will also be windy with a Status Yellow - warine gale warning issued for coastal areas. MORE BELOW TWEETS.

Our Atlantic chart shows precipitation and pressure forecast in 6 hour intervals for the next 7 days:https://t.co/9Giuj4CR5m

The national forecast and the outlook for the coming days available here:https://t.co/9gKN6SVok4 pic.twitter.com/w5jbySsQ8C

NATIONAL FORECAST issued at 9.37am on October 19.

MONDAY
Blustery today with outbreaks of rain spreading northwards over the country. Heavy rain is expected in some areas with a risk of local flooding, especially in the southwest, west and northwest. Highest temperatures of 12 to 15 degrees in fresh to strong south or southeast winds.

Spells of heavy rain spreading northwards over the country tonight with a continued risk of local flooding. The rain will turn more showery in nature later in the night with some clear spells developing but further heavy rain will return across the southwest before dawn. Becoming very windy in southern coastal counties. Minimum temperatures of 10 to 13 degrees.

Tuesday: Tuesday will be a windy day with showery outbreaks of rain extending across the country. Some drier spells at times, especially across the northern half of the country during the morning. However, there will be further heavy downpours moving northwards in the afternoon with isolated thunderstorms and a risk of local flooding. Highest temperatures of 11 to 14 degrees in strong and gusty south or southwest winds.

Drier conditions will develop in many areas on Tuesday night although showery outbreaks of rain will continue in parts of the west and north. Lowest temperatures of 7 and 10 degrees, with southerly winds easing overnight.

Wednesday: Quite a mixed day with scattered showers, mainly in western areas, with the midlands seeing the best of any sunshine. Highest temperatures of 12 to 14 degrees. Light cyclonic variable winds, although fresh to strong northerly winds along western coasts.

A few showers overnight but a lot of dry weather too with clear spells. Lowest temperatures of 1 to 5 degrees with frost possible in southern many. Light to moderate west to northwest breezes.

Thursday: A mostly dry day with good spells of sunshine and just a few showers. Cloud will increase from the west later in the day. Highest temperatures of 10 to 13 degrees in mostly light southwesterly breezes.

Starting mostly dry across the country but a band of rain will push in from the Atlantic towards midnight, spreading eastwards overnight. Lows of 6 to 8 degrees. Moderate southerly winds veering west with the clearance of the rain.

Friday: Outbreaks of rain clearing into the Irish Sea early in the morning to give a bright day on Friday with sunny spells and scattered showers. Chilly with highs of 9 to 11 degrees in moderate westerly winds.

Continuing unsettled for the weekend with further spells of wet and windy weather.