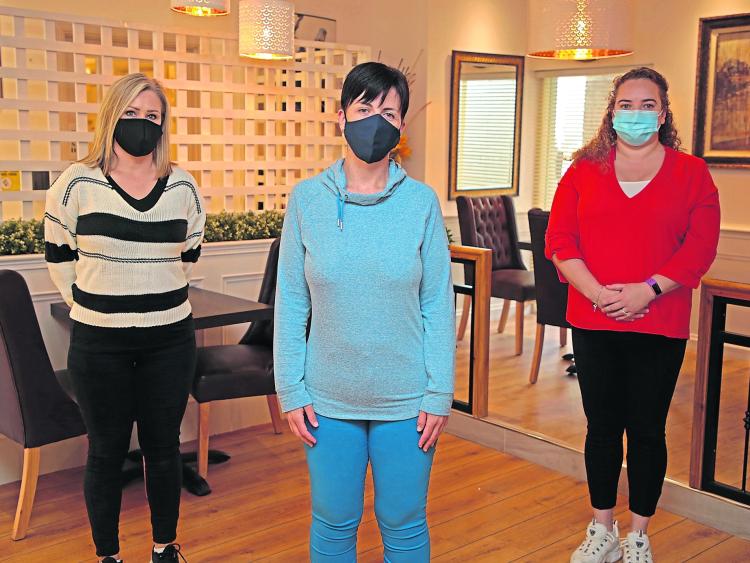 Josephine Freeman, Kelly Gannon and Dolores Needham who spoke to the Leader this week about their struggles to access vital services for their autistic children. Missing from photo (Jennifer McKenna)

An acute lack of management and knowing who or what department to turn to has proven to be an almost constant thorn in the side of Dolores Needham.

She spoke of how she and partner Tony have hit stumbling block after stumbling block at every turn in their endeavours to obtain basic state backed autism supports for her five-year-old son, Keelan.

“Keelan was referred at 18 months and was diagnosed at two and a half,” revealed Dolores.

“At that stage he was non verbal, he is now what they call pre verbal but it’s not because of any therapies he got.

“It is January since we seen (a) speech and language (therapist). Previous to that you would receive these little cards in the post and you would think brilliant but then all you would see on it is cancelled.”

As a frontline healthcare worker herself, Dolores is all to aware of the pressures that confront the State’s already constrained health industry.

She claimed moves by HSE chiefs to reassign staff in a bid to keep a lid on Ireland’s coronavirus fallout has been to the detriment of not just her child but umpteen others across a system which is in dire need of investment.

“You have cancellations and promises that never come true,” she said, as she detailed how Keelan has not seen a psychologist in two and a half years.

To counteract the gaps in a system Dolores maintained is bereft of investment, she said parents like her are being encouraged to undertake courses of their own.

“I am ringing well over a year and there is nobody, I cannot get a point of contact,” she contended.

“I’m a healthcare worker, that’s my job to be out there on the frontline, it’s not to do my kids therapists jobs.”
Dolores said but for the companionship and sense of solidarity she shares with Josephine, Kelly and Jennifer, the challenges facing her and partner, Tony would be all the more stark.

“I have a three year old daughter and Keelan’s behaviour can be very aggressive and my three year old knows to run and if I ring for help as to how to deal with his behaviour I get a snotty phonecall back saying 'he is frustrated' or he is this or he is that,” she said.

Health Minister Stephen Donnelly last week announced details of a €7.8m capital investment to help clear the huge backlog of thousands of children with conditions like autism on waiting lists for an assessment of need.

It's anticipated the funding will allow clinicians to see more children by working overtime with additional staff being hired.

But as Dolores attested to, for children like Keelan the onus is not on two, three or four years down the line, it's now that those services are needed and put in place.

Dolores said her endeavours and daily struggle to not just hold down but induce critical support services for Keelan has been an incessant and never-ending battle.

“You are on your own. Tony works, he comes home maybe some mornings maybe 4am and Keelan is up at 5am and it’s ‘hi daddy’ and I am up at 7am to head for work for 12 hours. Where do you go? If we didn’t have each other where would we be?

Recent figures show there were 5,083 overdue assessments at the end of March with less than 3pc being as a result of exceptional circumstances.

Effectively in limbo and despite contacting Longford/Westmeath. Fianna Fáil TD Joe Flaherty to further her case, Dolores said the plight she and Tony now face has left her emotionally and physically tormented.

“I feel completely let down by the HSE, completely,” she stated in no uncertain terms.

“As for services, what services? There is no services. Nobody answers to anybody. In my situation, I am lost for words. I can’t put into words how angry I am, how upset I am and how let down my little boy is and my family is.”

Blunt and forthright words they may be, they are ones which Dolores hopes senior health chiefs will pay close attention to over the weeks and months ahead.