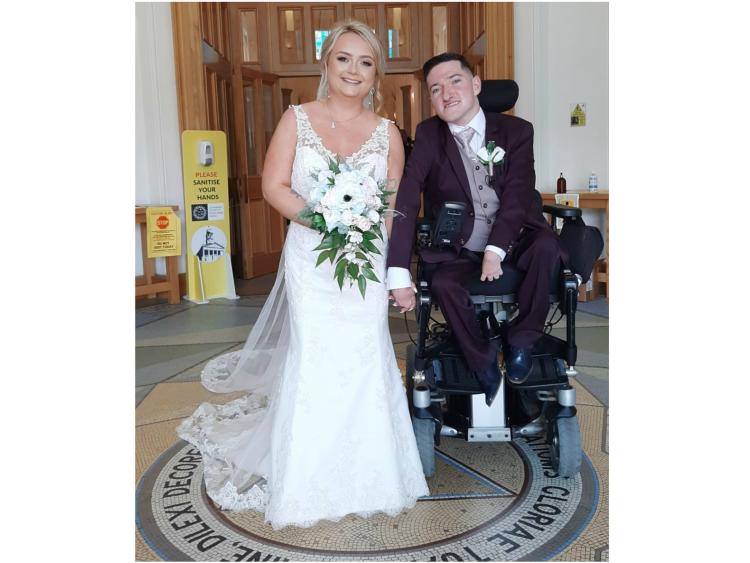 Last weekend saw a mix of Covid-related news stories as Dublin went back into stricter measures, while pubs across the rest of the country prepared to reopen their doors after six long months of closure.

But it will be a weekend that will forever stand out in the memories of Longford couple, James Cawley and Ally Kiernan, who tied the knot at St Mel’s Cathedral following a number of changes to wedding plans over the last few months.

“It was an intimate and emotional ceremony - unique and perfect,” said James Cawley of his and Mrs Cawley’s big day.

Restrictions for weddings currently allow for no more than 50 guests, all of whom are required to wear masks, except when eating. The traditional 6.30am finish is out the window, with all party antics to finish up by 11.30pm, but that didn’t stop Mr and Mrs Cawley from having the time of their lives.

“At one point I was sitting there with a pint in one hand and the wedding ring on the other and I was happy out,” said James.

“It was surreal, really. There was so much chopping and changing with Covid, but we are absolutely thrilled to be husband and wife.”

Initially, James and Ally had planned to hold their wedding in June for 250 people but, with guidelines at their most restrictive, the couple decided to postpone until December 18, when they would have a Christmas wedding instead.“We decided in August to move it to September 19. With schools reopening and so much confusion with flu symptoms, we didn’t forsee numbers raising at Christmas,” said James.

“We didn’t think we’d have the traditional Irish wedding of 250 people.”

As it happened, Ally and James held their wedding reception at Bloomfield House for a total of 45 people and made it as special and intimate as they could, while also remembering James’ late sister, Nicky, who passed away last year following a battle with cancer.

“We left the house at 2pm and stopped by her grave and we had a chat and a drink together. I dropped off flowers and we lit a lantern to remember her,” said James.

“Padraig (Nicky’s husband) joined us for that. It was so important to us because it will be her first anniversary next weekend.

“It’s so poignant to think that this weekend we were celebrating getting married and next weekend we’ll be remembering her,” he added.

James and Ally were thrilled with their intimate wedding, with Fintan Farrelly and Emer Barry providing beautiful music for the ceremony. They even had face masks designed for all their guests.

“It was a fantastic day. Everyone pulled out all the stops,” James concluded.