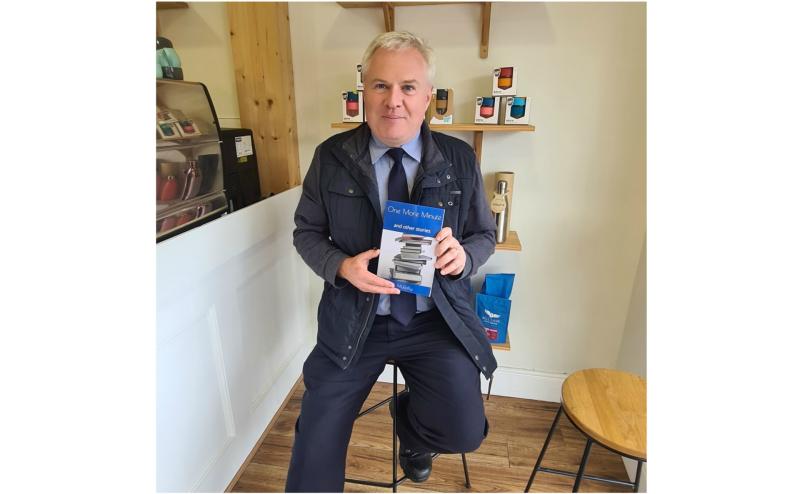 There’s no arguing our local Community Policing Unit contains some of the most thoughtful and caring gardaí in the county. And local Community Sergeant, Lionel Mullally has proven that by putting his exceptional writing skills to good use and penning a book of short stories to raise funds for the Little Blue Heroes Foundation.

Lionel is a member of the Scríobh Creative Writing Group in Carrigallen but One More Minute and Other Stories is his first solo work.

“I’ve always been writing but started to take it more seriously about six years ago,” Lionel told the Leader over tea on Saturday afternoon.

“I was involved in a couple of anthologies but it was always in the back of my mind to do my own book. It’s something I enjoy doing.”

It’s something he’s good at too, with each of the twelve short stories capable of bringing out every kind of emotion from amusement to sadness in the space of just a few pages.

Well-written characters are brought to life in minutes as the author covers all manner of topics from sport to childhood friendships to love and loss. In fact, he has won awards in the past for his short stories.

The title story, One More Minute is one such award-winning tale, which is a personal favourite of this reporter, and drives home the fact that life as we know it can change forever in just sixty seconds.

One More Minute is one of Lionel’s favourites too and winning an award for his story of Garda John Doyle made him “sit back and think, someone else likes this - that’s one I’m proud of”.

And, while the book is a great read, he didn’t write it for any sort of fame or grandeur, but rather to support a charity, which is particularly close to his heart - the Little Blue Heroes Foundation.

“Lionel has been a long time supporter of us since we started Little Blue Heroes,” said Sgt Alan Keane, who is secretary of the Foundation.

“Little Blue Heroes was established in 2017 by a number of guards that were able to identify families in communities that had children with very serious illnesses.”

The aim of the charity, Sgt Keane added, was to provide financial and practical support to families and to widen the support for families in the community - particularly in rural areas if something happens and they need somebody to call.

“Also, an awful lot of kids we were engaging with had a fascination with the uniform, so we wanted to make them honorary guards,” said Sgt Keane.

“For the child, it’s a great distraction. A lot of them are going through treatment and some can be harsh treatments.

“So with our honorary guards, we organise days out, which is a distraction for them.”

Currently, there are 120 families from various different parts of the country who are availing of support from Little Blue Heroes.

“We’re hampered a bit by Covid. We like to have a graduation day for the children every year where they get to come to Garda HQ and meet the commissioner and they get a certificate for their bravery and a medal,” said Sgt Keane.

“Then we take them to see the dog unit and the mounted unit and then back to HQ for something to eat. It’s a great day out for them.

“Then local guards, if there’s an event locally like a parade or a festival, they’ll get the kids involved.

“We are hampered a bit by Covid but we’re still doing the financial help for families where maybe one parent has had to give up their job to become a carer for their child and the other parent is doing the best they can, but may be affected by Covid as well.”

At Easter, for example, shopping vouchers and gifts for the children were sent out to families and it is hoped something similar will be done at Christmas.

Funds are raised for the foundation via various events, with gardaí doing charity cycles or skydives or, in Lionel’s case, using their talents and writing a book.

“Lionel has been working on this for a while. It’s been an ambition of his to compile a book of short stories and it is very honourable of him that he thought of Little Blue Heroes. The funds raised from the book will go towards those services,” said Sgt Keane.

“I think Lionel has a career in writing ahead of him. He’s a talented man.”

Anyone can nominate a child to become a Little Blue Hero by going to www.littleblueheroes.org, added Sgt Keane.

“It’s inspiring when you see what these families and kids go through. They’re heroes to us,” he said.

And the gardaí involved, such as Alan or Lionel, are undoubtedly heroes to them.

One More Minute and other stories is available on Amazon for €7, with proceeds after costs going directly to Little Blue Heroes.
Longford’s Community Policing Unit has always been there for the people of Longford. Support for our local Community Sergeant would mean support for the Little Blue Heroes and the children in Ireland whose lives are improved by the services of the Foundation.