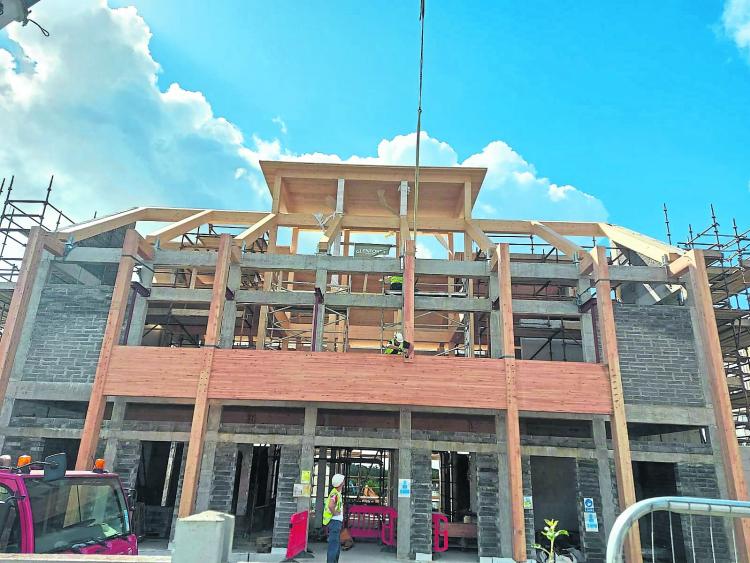 Covid-19 has taken its toll on all small towns in rural Ireland but, while things are quite challenging in Edgeworthstown, they are certainly moving towards a bright and positive future.

Regeneration plans are well underway with plans for the new library, the digital hub and the Main Street footpaths and lights going full steam ahead.

“Edgeworthstown is tipping along. When you come through the town at 10 o’ clock at night and there’s no pubs open, it’s a very eery place,” said Gerry Lynn of the Edgeworthstown Traders Association.

“But the new library is taking shape, there’s new street lighting and we’re hoping to have new paths. The hub is on course in the Ulster Bank premises.

“We’re no different to any small town though,” he added, revealing that four or five businesses have already closed down in Edgeworthstown - and that’s before you consider the fact that the pubs are not yet permitted to open.

“It is a battle and sometimes it feels like we’re fighting a losing battle, but we’re giving it a good go. There’s still a lot of good stuff happening and we have to be optimistic.”

Cathaoirleach of Longford County Council, Paul Ross, took a positive attitude when talking about the town, telling the Leader that, while things are tough now, there’s no shortage or positive news stories in the area.

“The library and the hub and the regeneration of the Main Street are the main things at the moment,” he explained.

“There’s also the old schoolhouse, which has been turned into a tourist attraction. It’s now a museum-type tour with a number of artefacts and memorabilia from the era of Maria Edgeworth.”

An equally exciting project, he said, is the pathway that was recently opened up, linking the entire town and providing residents of the nearby housing estates with a safe way to get to the school, the community centre and other key areas of the town.

“But the centrepiece of the regeneration of Edgeworthstown’s Main Street is the library project,” Cllr Ross emphasised.

“The centre of town site was gifted to Longford County Council by Edgeworthstown District Development Association, who bought it in the downturn and handed it to the state in an effort to regenerate the Main Street.

“The library will increase footfall in the town and will tie in with the regeneration of the Main Street. The town received €1.1m for this from the Rural Regeneration fund.

“There will be a carpark at the back of the library and the council is hoping that it’ll make the town more attractive.”

The closure of the Ulster Bank was, as Cllr Ross put it, “a hit to the town”, but Edgeworthstown is bouncing back from that loss with a plan that will hopefully be even better for the area as plans move forward for the new hub.

“The hub will create more jobs, especially in light of Covid-19. These new workspaces are the future of businesses in Ireland,” said Cllr Ross.

“Working from home requires broadband and office facilities and the hub will provide a highspeed broadband connection and working space.

“Working from home is the focus now, with expectations that some people might never return to working in an office environment.

“The hub will make the town more vibrant and bring more footfall.”

Businesses in the area are also starting to push ahead with plans for expansion and regeneration.

Popular café Bia Deas, which celebrated its fifth birthday around this time last year, has acquired extra space for its premises, with Seamus and Joan Gilchriest expressing their excitement at expanding their business.

“We’re looking forward to our expansion and would like to say thank you to all our customers for their support,” they said.

Meanwhile, Kane’s Garage is looking at planning permission to expand also, with hopes of developing a service station in Edgeworthstown.

“It’s the only filling station in Edgeworthstown and it’ll do a lot for the town to have a proper service station nearby,” said Cllr Ross.

Overall, the town is well placed for continued growth, especially considering how things have improved since the Celtic Tiger crashed.

Situated along the train line between Dublin and Sligo, and on the N55 and the N4, the town is a gateway to the north, south, east and west of the country.

Add to that the fact that all houses in the town are occupied, resulting in a “housing scarcity” and it gives you an indication of how far this little town has come - and how far it can still go as things continue to move forward.

Covid-19 may have slowed its growth by a few months, but nothing will stop Edgeworthstown from moving forward and continuing its regeneration.