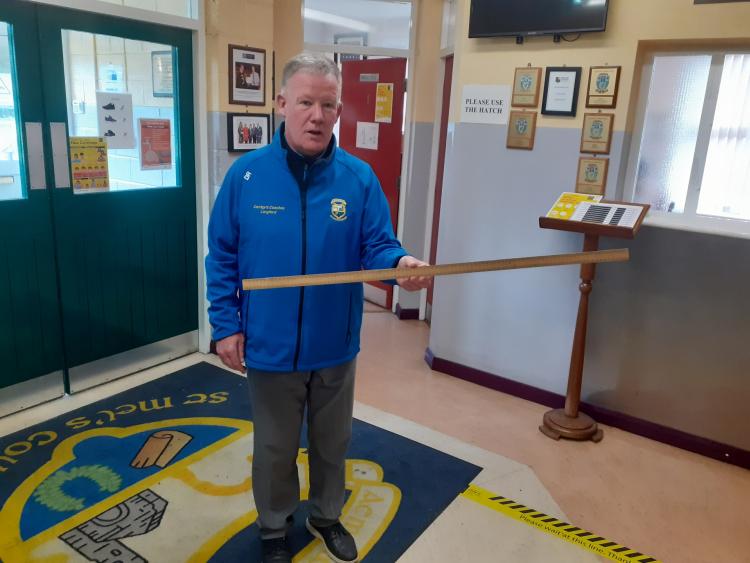 These are the images which show the lengths schools are being forced to go to in order to facilitate the safe return of students after almost six months away from their desks.

St Mel’s College has been forced to dig deep into its budgetary reserves in an attempt to ensure the second level school is as socially distant friendly as possible in the wake of an unrelenting Covid-19 storm.

The Leader got a A hand look at how the changes have gradually transformed the school into an environment which will, according to principal Declan Rowley, enable both students and staff to renew their studies for the first time since the middle of March.

Gone are the days of busy classrooms, crowded corridors and congested canteens. In their place are distinguishable one way systems, refurbished prefabs, restored classrooms and hand sanitisers at every corner.

It’s a reality Mr Rowley said was an inevitability in today’s much changed and hygiene friendly climate.

“Between staff and pupils, we will have 600 people in here in this area, starting on September 1,” said the Killoe native.

“We are doing the best we can under the circumstances and we would hope with the one way systems, the one metre social distancing and the wearing of masks and visors that we are doing all we can in order to make sure this thing works.”

There were comforting words too for education chiefs, a number of whom headed by Minister Norma Foley, have come under fire about whether or not schools would be given the green light to re-open at the end of the month.

“I have to be honest and say the Department have done very well and given us money to do all this and we have been using it wisely in many aspects,” he said, highlighting a stream of new furniture as a case in point.

“We had to buy a lot of single desks and single chairs that we wouldn’t have had to stock up on because we have been creating new rooms all the time.

“There has been a lot of painting going on and we have timbered out a lot of rooms too and we have a lot of IT going in. We are buying picnic tables and stuff and we are creating canopes for lunch areas so there is a lot of stuff happening and it is costly but we have been well financed.”

That added monetary support has been supplemented by the huge campus that makes up St Mel’s College.

It has enabled Mr Rowley and those within the St Mel’s managerial ranks to bring a series of prefabs back into use while also regenerating sections of the school’s pastoral quarters for everyday use.

But that’s not all with the school bringing in contactless payments for the likes of hot food bought on its grounds.

“Before this Covid arrived at all we had made a decision with the staff that we were going to move to one hour classes,” he said.

The St Mel’s principal also had words of advice for parents who may be wary of sending their children back to school in the face of a growing Covid-19 storm.

“There is a certain amount of risk involved and I think we are all going to have to live with that risk,” he said.

“There is a bit of risk with us all coming in, whether you are a teacher or a student.

“I just feel the agegroup of the student population are not as vulnerable to this thing as maybe older people.

“The couple of things I would say to students is to make sure the student is well educated in relation to the responsibilities they have because we just don’t want to be like prison wardens running around.

“They are old enough at this stage to know what is right and what is wrong and it’s part of their education as well.”

This is his eighth year as principal of St Mel’s College and his 34th in a profession he has dedicated much of his adult life to.
By his own admission the former Longford and Killoe footballer is quite acceptive of the challenge which lies ahead.

“It definitely is,” he said, when asked if this was his most testing at the helm.

“It is challenging and it does energise you in a way as well because things can become routine and sometimes when you are kicked out of routine you have to go and be innovative and that is good for the mentality as well.

“But I think we can get through this. It just depends on society now really. If it happens outside and it really peaks, I think we will be the fall guys straight away because if it comes into schools we are under pressure straight away. Whatever happens out in normal society ends up back in the school.”

Let’s just hope society keeps up its end of the bargain.