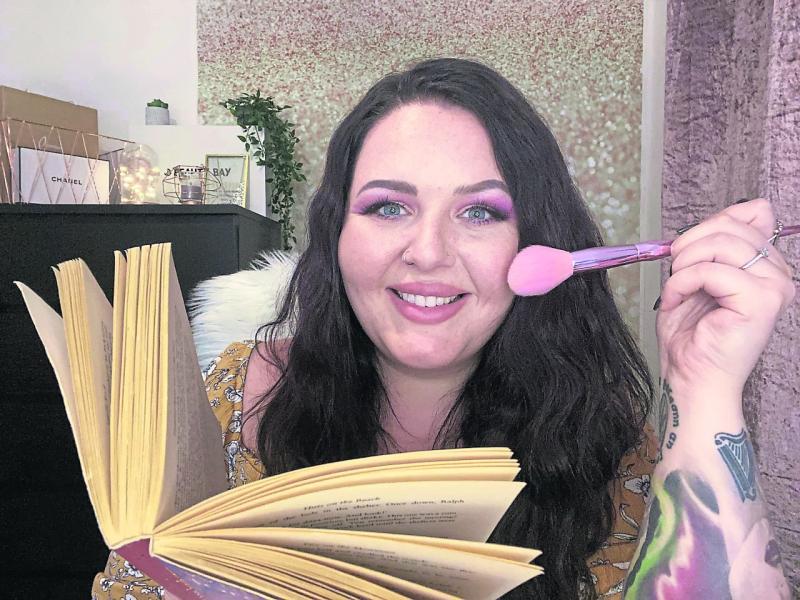 We’d all love to take our passions and turn them into something that others might find useful but Lanesboro woman Áine O’Reilly took that to a whole new level when she combined her love or makeup with reading.

Áine is originally from Rathcline  but now lives in Strood, in south east England and is a teacher in a little village called Hoo, where she works at a school called the Hundred of Hoo Academy.

“Yes, it really sounds like something out of a Winnie the Pooh story,” she admitted.

“Hoo is renowned for its ‘no excuses’ approach and the standard in the school is second to none. I was nervous to start there but seeing others do so well is a great motivator.”

Since applying for the job just over a year ago, Áine has been given control over the department social media accounts. She was also Teaching & Learning Champion and researched new methodologies for the classroom. She even started the school’s first LGBT+ society.

Just last month she secured the role of Head of Year 8, which is a position she has wanted since starting in the UK system. That’s a lot of achievements for such a short teaching career so far.

So it’s safe to say things were going well for Áine. That is, until Covid-19 came along and shut the schools down. But she learned to adapt.

“Teachers had to entirely change their job description,” Áine told the Longford Leader.

“Suddenly, we were sitting down for massive periods of time, staring at our laptops, both to make lessons and correct the work. Our jobs continued to be just as, if not more intense.

“We had to become qualified Google Educators and sit a three-hour intense examination. All of our classes moved to online, with all meetings being over Google meet, all of our CPD (Continual Professional Development) also held through Google meet or Zoom.

“Students, teachers and parents had access to our email and it felt like there was very little separation between work and home. We were accessible 24/7. This wasn’t down to any failings of my school, but the way the entire country was facing distance learning.”

Being a form tutor means you have around 30 pupils who you care for in regards to behaviour and attendance, etc - their needs outside of the curricular, Áine explained.

This meant she would call her students most days to check in with their mental health. It was difficult for her not to be able to see vulnerable children who come from more difficult backgrounds and for whom school was their only escape.

On top of all training commitments and other work, Áine said every teacher volunteered to go in to teach the key works children.

You would think she surely wouldn’t have time for anything else in her life, with that much work on her plate. But Áine, an avid reader and a make-up enthusiast found time to work her hobbies into her career by creating her YouTube channel, Makeup & Metaphors.

“I’ve always been a huge fan of YouTube, especially when I was in university and when I first moved over to Kent,” she said.

“I would spend hours watching makeup artists and makeup enthusiasts complete challenges and makeovers. However, I needed to also have some kind of extra information as I got a little older - I wasn’t interested in YouTuber drama anymore and discovered a network of creators making videos speaking about the news or famous crimes and cold cases throughout history.”

That struck a chord with Áine and she decided to see if there was one on English or a school subject for the girls in her form to watch. But sometimes if you want something done right, you have to do it yourself and that’s exactly what she did.

“I couldn’t find one video that had a makeup artist explaining poetry or the context behind famous works of literature,” she explained.

“I thought ‘I’d love to do that, but I’m far too self conscious about… well, everything’.”

Unfortunately, Áine’s wedding to her fiancé, Jim, was cancelled this August due to Covid-19 and she admitted to feeling very sorry for herself and that’s when she decided to start her channel.

“I was working extremely hard on my online classes all week and then staying indoors all weekend so I finally just bit the bullet and went for it,” she said.

Each video covers a topic from English literature, ranging from Lord Byron and Shakespeare to Robert Louis Stevenson and Seamus Heaney.

In her videos, Áine takes the cover of a book by a famous author and creates a makeup look inspired by it, while talking about the book and the life of the author, which makes for some highly engaging content and sets her apart from other makeup artists on the web.

“Thankfully I've been teaching the topics for years now so all the information is in my head,” Áine explained when asked about the amount of work that goes into each episode.

“I do however spend a few evenings revising by watching a documentary or reading a biography etc and making some short notes.

“Sometimes I have a vague idea of what makeup look I want to complete but usually I just go with what I'm feeling on the night.

“The recording itself usually takes an hour and a half - it's the editing that's the laborious part. I always have a specific idea on how I want the video to be and how the thumbnail should look and I won't stop until it's achieved on the screen.”

So far, her students have reacted well to her very educational videos. A considerable amount of them have told her they miss her and that her videos help them to feel like she’s there with them each week - especially her year 11 students, who were supposed to have their GCSE exams and their prom this year.

“We were a very tight knit group and their grades have made huge improvements coming up to the exams - then it was kind of snatched away from them,” Áine confided.

“They were very upset and thought 'we'll never see each other again'. They usually comment under my videos and it makes me so happy. If I hid them from the students, I think they may have used it as something to be embarrassed about, but I've been super open with them and ask them about ideas, etc, and they feel involved.

“One class asked for a shout out a few weeks ago and when I did it they emailed, thanking me. Very sweet. I have a surprising amount of American viewers who enjoy the 'passive learning'.”

So far it’s been an enjoyable experience for Áine too, who is delighted when a video does well or can be crestfallen if one doesn’t really take off but, as she said herself, that’s all part of it - and it has taken her mind off her wedding and honeymoon, which have been postponed until next year.

“My dream would be to be able to teach part time and continue with videos. That way when I have a family, I would be able to spend more time at home - but that would be years away yet,” she said.

“I've only been on the platform just over three months and am close to 1,000 subscribers and have near 1,000 watch hours. It's crazy to think people have spent a thousand hours listening to me.”

It’s not surprising that people are engaging, considering how well liked the Rathcline lady is, both online and offline.

Her students seem to adore her and that’s down to her teaching methods and her understanding of the needs of young people.

“It's vital that pupils feel that they're heard. Teenagers go through an awful lot and sometimes they feel like the adults just see them as children who don't matter,” Áine explained.

“They know I'm listening and that I'll follow through with action (or consequence) and that I'll always be there for them, regardless of whether they're having a good day or a bad one. Just like we would want. Also, it's important to have a sense of humour when dealing with issues everyday.”

For now, Áine will continue what she’s doing in the classroom and keep up the good work online. But if there’s anything she’s learned from starting up her own YouTube channel it’s that you should seize the day and run with an idea when the passion strikes.

“If anyone out there is thinking of setting up a YouTube channel, starting a band, taking up a hobby - just do it,” she said.

“Life is too short to be worried about what others might think. There will always be naysayers no matter what you say or do. Feel the fear and do it anyway.”