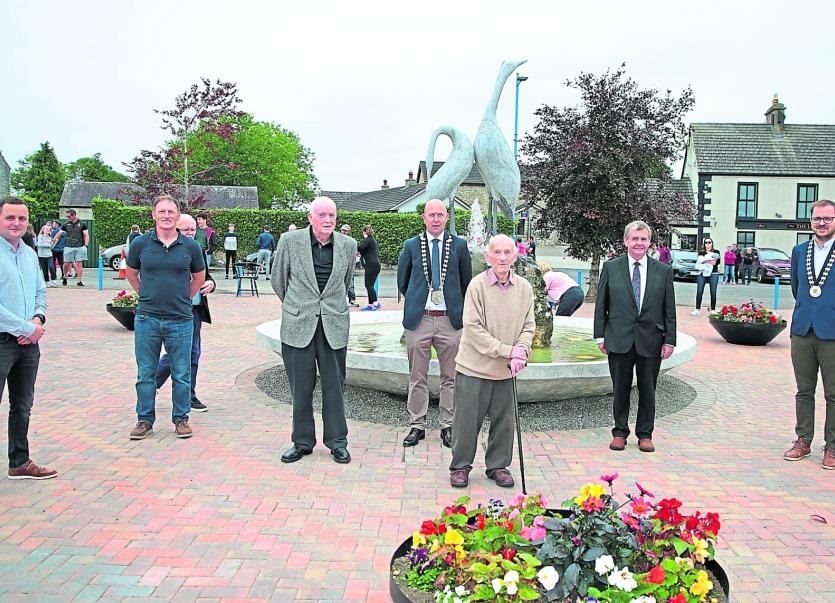 An impressive new fountain, sculpture and seating area was opened in the south Longford village of Newtowncashel on Sunday afternoon last.

Proud overall winners of the 1980 National Tidy Towns competition, the vibrant and innovative Tidy Towns committee in ‘Cashel came up with the concept for another stunning piece of artwork.

There was a fine turnout, including Ballymahon Municipal District Cathaoirleach Cllr Colm Murray and Longford County Council Senior Planner Donall Mac An Bheatha, for the opening of the magnificent public area with seating, a lovely fountain and a wonderful sculpture carved by Mark Feeley from Roscommon.

Gabriel Starkin, who was one of the founding members of Newtowncashel Tidy Towns in 1977, performed the official switch on of the fountain.

From this elevated location, the new feature looks down on bogland, forests and beyond to three counties and it will become a focal point for social and religious events in the village.

The Tidy Towns have also created the beautiful Quarry Park with all its sculptures, and many other features through Newtowncashel.

Located centrally in Ireland’s Hidden Heartlands, the good folk of Newtowncashel are hopeful that their ‘hidden gem of a village, of the popular routes, will become a favoured place to be visited by future generations and staycationers.