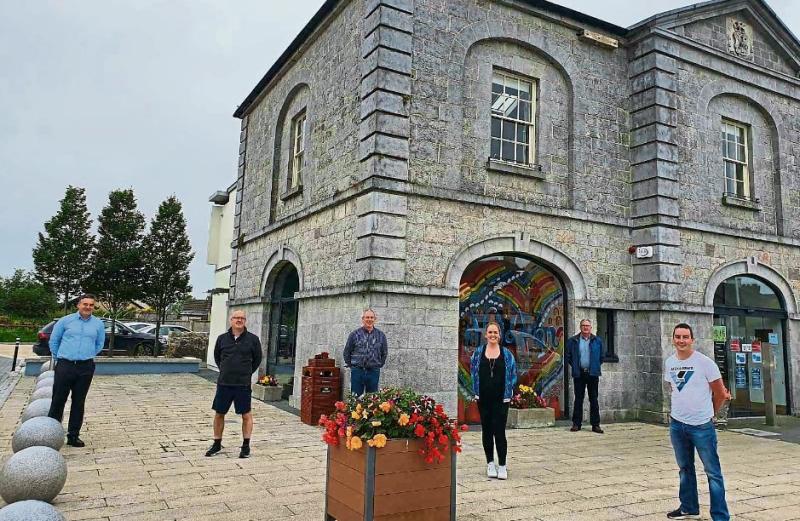 Like a phoenix from the ashes, Ballymahon has really managed to bounce back from the depths of its Covid-19 outbreak in May.

In fact, the pandemic has brought about new opportunities that might not have arisen had things not gotten so bad.

The announcement by Minister for Social Protection, Heather Humphreys of €25,000 for Ballymahon under the Town and Village Renewal Scheme was a huge bonus for the Ballymahon Town Team, who had submitted a proposal for an artisan market.

“The team is made up of people from all different sectors and voluntary organisations. There are 12 people on the town team, appointed by the Public Participation Network,” said team PRO, Niall Dowler.

The Town and Village Renewal Scheme enables communities to adapt to Covid-19 in a creative manner, and it doesn’t get more creative than this.

“We have no technical plans drawn up. But between the town team and the community, we’ll draw up a plan, which will include power points, running water and other facilities like that,” said Niall.

“We’ll be retro-fitting an area in town that will make it easy for a pop-up market to be facilitated.”

Currently, the plan is to set up the market beside the Ballymahon Community Library, where there is an open space that would be perfect to facilitate such an amenity.

“It’ll be an artisan market which will incorporate crafts, baking and a combination of different entities,” Niall explained.

“It’ll be retro-fitted for social distancing. It’ll be semi-indoor and it’ll be a demountable structure that can be taken down, so there can be an open area there.”

There are no concrete plans as of yet, with the project still in its infancy, but the town team is hoping to have the pop-up market on a monthly basis, depending on demand.

“When the project is finished, there’ll be an open invitation to suppliers. We won’t discriminate against suppliers who aren’t from Ballymahon. But there are various crafts and businesses around and about the town that would be welcome,” Niall explained.

There are a large number of suppliers in the area who would greatly benefit from a facility like this, which will bring in people from around the local area, as well as from further afield in the county and from across county borders.

Ballymahon is brimming with worthy craftsmen and women and local producers, from Wide Street Brewery to Alison Brea of Sonas Aromas, who makes beautiful scented candles, not to mention the many suppliers just outside the town, such as Fiona Egan’s Bakery, Lough Ree Distillery, Richmond Cordial.

And what’s more, the project came about, not in spite of Covid-19, but because of it, proving that a town like Ballymahon can drag itself out of any pit and turn something dreary into something positive.

“The whole idea came about in light of Covid-19. It’s part of the stimulus packaging and the funding is a big thing for that,” Niall explained.

“There’s a lot to do with Covid-19 and safeguarding public health but we’re encouraging people to spend money, shop local and generate revenue.

“This project wouldn’t have come about if not for Covid-19, so it’s something good that came from the pandemic.

“It’s just to show that Ballymahon is open for business.”

The next steps in the project, Niall added, are to engage with the local council and the community to put a solid plan in place before work begins on its implementation.

“We’d like to see it progressing and into early next year,” he said.

“It will require input from Longford County Council but it’s not a massive project. We will be engaging with the local authority and hopefully we’ll move forward with it by the end of this year.”

Aside from the new market, the town team is actively engaging with the local authority on a number of projects and is committed to the social advancement of Ballymahon.

“We look at the needs of the community,” Niall explained.

“Covid-19 brought out a realistic model of working from home but that might not necessarily suit everyone, so we’re looking at a hot desk area for people working remotely.

“We’re always looking to improve social amenities in the area and we’re trying to get some type of flagship project going with Longford County Council for the betterment of the social advancement of Ballymahon.”

What’s really driving Ballymahon forward during this time of great difficulty for the entire country, is the passion and the love that the people have for their hometown.

And, while there are still some hurdles in the town’s future, there’s no doubt Ballymahon will rise to the challenge and continue to thrive and grow, Covid be damned.