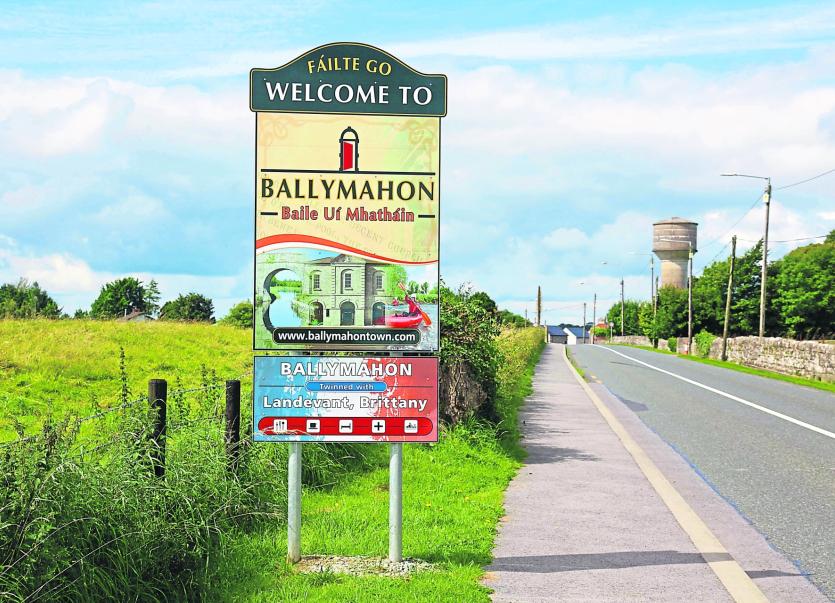 There’s no denying Covid-19 has hit every town, city and village in the country this year, whether that be economically, socially or in terms of public health.

The south Longford town of Ballymahon was hit hard in May when there was a Covid-19 outbreak in the local meat factory, Kepak.

In fact, the 173 cases of Covid-19 that were diagnosed in the town account for approximately 60% of the overall total in county Longford since the beginning of the pandemic.

But Ballymahon has never been a town to lie down and take a beating. In fact, according to some of the locals, the town is not only fighting back from the depths of the Covid-19 pandemic, but thriving. And that’s thanks to its people.

“Ballymahon is fighting back well,” said local businessman, John Nally, who is extremely proud of the town’s ability to jump any hurdle.

“Ballymahon is going to be a real tourist hub because we have people here who run the whole town properly. The town is flying and everyone here has the enthusiasm, which is so important.

“We’re starting to see people keeping it in Ballymahon and coming to Ballymahon for their shopping and the more the merrier. The more people heading for Ballymahon, the better for the whole town.

“The whole town is growing. Give Ballymahon three years and it’ll be some place,” he added.

The south Longford town’s success story is largely down to the community spirit and the help that businesses offer to each other on a regular basis, John pointed out.

“It’s all about the bit of passion you have for the town. Ballymahon in ten years time will be a serious tourist hub, with local job creation,” he said.

In fact, the majority of businesses have survived the pandemic so far. Ballymahon sadly lost its very popular fine dining restaurant, the Nine Arches, on Main Street, but John has revealed that the premises will not stay empty for long.

In fact, preparations are now underway to ensure the opening of a new restaurant facility, which will serve high end pizzas and other food to customers.

The opening of the business will ensure Ballymahon’s continued growth, John explained.

Local councillors have also expressed their delight at how well the town is doing, with Cathaoirleach of Longford County Council and Ballymahon MD member, Cllr Paul Ross, praising local businesses for their diligence when it comes to social distancing.

“I visited a few of the businesses in Ballymahon and it’s encouraging to see how aware they are of Covid protocols,” said Cllr Ross.

“Center Parcs is open again and it’s good to see the businesses back trading.

“I would like to encourage all businesses to apply for the Restart Grant, which is a minimum of €4,000 and a maximum of €25,000 to help get businesses back up and running,” he added.

Ballymahon based councillor Pat O’Toole noted that, while the supermarkets were not adversely affected by the lockdown restrictions of the last number of months, there are a large number of businesses in the town that were.

“But the ones that opened when we moved to phase 3 are doing well now,” he said.

“Generally speaking there’s a good vibe around the town. It’s unfortunate the pubs couldn’t open but, outside of that, there’s certainly a great buzz around the place.

“We haven’t had that many casualties. The Nine Arches was a big loss but there will be a new place opening up there soon. We’re getting back to as near to normal as possible, given the circumstances.

“Overall, it’s very positive. It is unfortunate that the pubs aren’t open, so people can go for their few pints. But the pubs that are opening - Skelly’s and Cooney’s - are doing very well at the moment. They have good space outside and they’re well able to manage the social distancing requirements.

“So we’re on a positive note,” he concluded.

But Ballymahon never really suffered from the effects of Covid-19. In fact, a number of organisations around the town banded together to ensure the community never went without the essentials.

Breda Greaves from the Convent Daycare Centre teamed up with Local Link to ensure the elderly and more vulnerable members of society would not go without their weekly groceries and prescriptions.

Local community garda Emma Kiernan was on hand when needed and made regular calls to the elderly around the area to ensure they had everything they needed.

The mart took a hit when its licence was suspended due to difficulties with the enforcement of Covid-19 regulations but even that is back up and running now, albeit in a more cautious manner.

In the midst of it all, the town has been continuing its efforts to promote tourism in the area, with a new walkway officially opened just a few short weeks ago, linking Newcastle Woods with the Royal Canal Greenway.

And, while there are still a number of challenges to overcome as the country slowly begins its recovery, theres’s certainly nothing to suggest Ballymahon is overwhelmed with difficulty.

In fact, Ballymahon is a town that is well and truly fighting back.