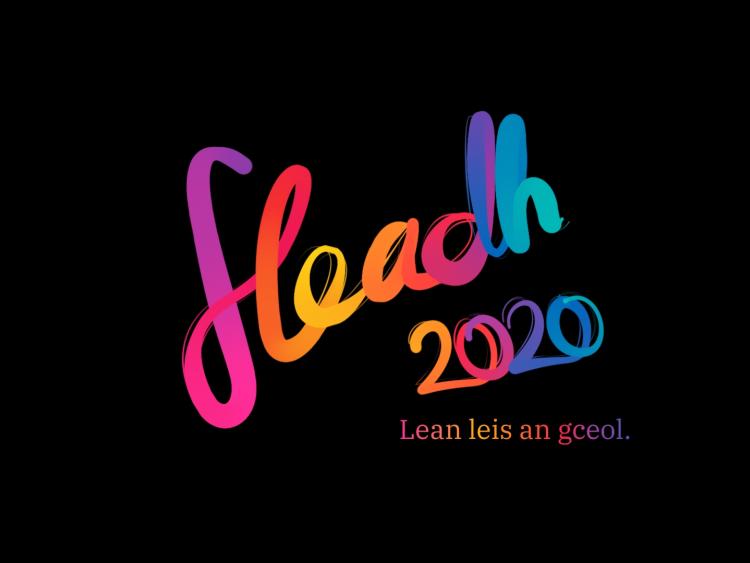 TG4 in partnership with Comhaltas Ceoltóirí Éireann, brings us Fleadh2020, a 4-night celebration of Fleadh Cheoil from around the world from 6th- 9th of August at 9.30pm on TG4. Available worldwide on

Fleadh2020 is a gathering (socially distanced and virtual) of Irish traditional musicians from around the world who, under normal circumstances, would be coming together to celebrate the All-Ireland Fleadh - ‘The Homecoming’ - in Mullingar in August. Over the 4 nights 6-9 August, Fleadh2020, will capture the essence of this annual event - the music, song and dance and the stories – and present a unique insight into the fleadh community, across Ireland and around the world. From Brisbane to Buncrana the young and the old, the learners and the legends come together to bring you a fleadh like never before.

On each of the 4 nights presenters Dáithí Ó Sé, Doireann Ní Ghlacáin and Kieran Hanrahan take us on a journey through a different province starting with Munster, through Connacht, Ulster and, finally, Leinster. Each night also includes music from musicians around the world - from Scotland, New York, Tokyo, and Brisbane and plenty of chat and fleadh stories along the way too.

On Thursday the 6th of August we kick off Fleadh2020 with a celebration of all things Munster with music from the Crossfields Céilí Band from Freemount in Cork, Meabh Begley from Baile na nGall, Mick Flannery-Cork and Susan O’Neill from Ennis, Aidan and Aine O’Donnell and friends from Tipperary, last year’s u-12 fiddle champion Laoise Ni Chinnéide with Brian Morrissey  from Tipperary accompanied by Chris Kelly, the five Fitzgibbon siblings from Croom, Co. Limerick, the Droney family from Co. Clare, and traditional music’s legendary duo, Seamus Begley and Steve Cooney.

For the second programme on Friday night the focus is on Connacht, where we meet the Kane Sisters, Liz and Yvonne, along with dancer Nathan Pilatzke; brother and sister Seamus O Flatharta and Caoimhe Ní Fhlatharta from Carna; We Banjo 3’s Fergal Scahill from Corofin and Ryan Molloy with young fiddle player, Sarah McHale, from Athenry; we have the Bofield Comhaltas group from Ballina Co. Mayo, Síoda from Sligo who perform with harper-composer, Michael Rooney, the O’Fatharta family from Moycullen, Joanie Madden will be joining us from New York, the Moylurg Céilí Band from Co. Roscommon, and we have legends Matt Molloy from Westport and John Carty from Boyle, along with young musician, Jack Molloy.

For night 3, Saturday night, we delve into Ulster with music from The Blackwater Céilí Band,  Donegal’s 13-strong female fiddle group, Sí fiddlers, featuring Mairead Ní Mhaonaigh, Bríd Harper and Liz Doherty, dance sensation David Geaney who performs a live version of one of his online collaborations with dancers, Ailbhe Liu and Seoda Wang from Donegal, the Ards Comhaltas group from Co. Down,  last year’s u-12 whistling champion, Seán McAleer, pipes and harp duo Padraig  McGovern and Sabina McCague, the Molloy family from Derry, Armagh’s Brian Finnegan along with his 10-year old student, Odhrán Woods, some of the mighty young musicians from across the province including Jack Warnock, Eimhear Mulholland, John McCann, Oisín Murphy, Dearbhla Scallon, and the Walls Sisters, and trad super group, Beoga. All this and a very special performance from Fleadh veteran, Michael Flatley!

The last night of Fleadh2020 on Sunday night focuses on music from Leinster. There will be an opening set of tunes from Mullingar Fleadh Chairperson Joe Connaire and friends, music from Attracta Brady and friends with young dancer, Cormac Lynch, singer-songwriter, Lisa O’Neill, fiddle music from Paddy, Kevin and Doireann Glackin, young multi-instrumentalist, Ademar O’Connor, some of the finest traditional music teachers including Kieran Hanrahan, Tom Doorley, Enda Seery and Jim and Damaris Woods, and a celebration of 30 years of Four Men and a Dog, all together for a first ever full reunion, with original band members Gerry ‘Banjo’ O’Connor, Mick Daly and Brian McGrath.