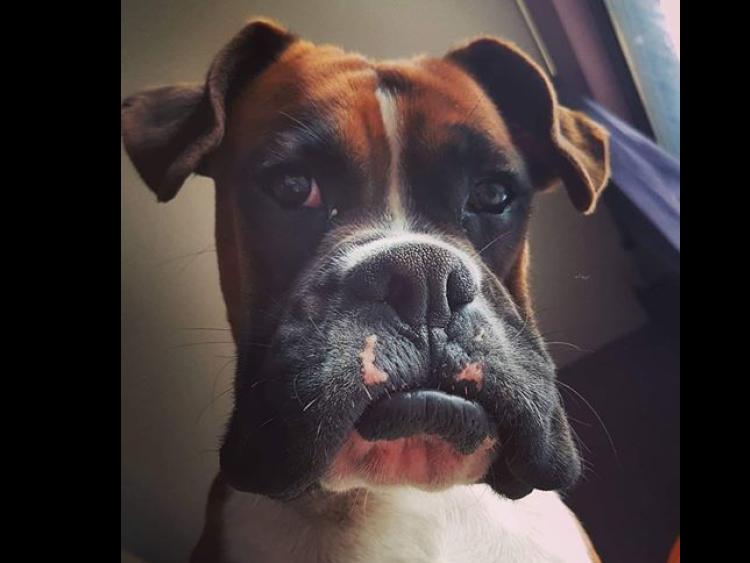 Abbeylara pooch, Leroy, is representing Longford in this year’s Nose of Tralee competition, which is organised by Pet Sitters Ireland and selects the cutest of pets every year for the competition.

Leroy is a three-year-old boxer who, as you can see from this face, is full of divilment. He likes to keep his owner, Georgina McCormack, on her toes, and keeps her smiling and laughing with his “crazy antics”.

“His favourite pastime is sulking when he doesn't get his own way or when his mammy isn’t paying him attention,” Georgina explained.

Leroy is a very clever dog and knows the sit, paw and lie down commands. He’s very friendly and loves other dogs but sometimes doesn’r realise how big he is.

“Myself and Leroy love running together and sometimes participate in canicross events; we do great together until we get to a steep hill and I really have to encourage him to keep going,” said Georgina.

“He is very accepting of other dogs coming in to our home and when I am fostering rescued dogs, Leroy shows them how to be a dog again by playing, being affectionate towards them and also sharing his bed,” said Georgina.

“He loves his lakeside walks and enjoys a swim during the summer months. Every dog is perfect in there owner’s eyes and to answer the question as to why Leroy should win is simple! Apart from the fact that I love him to bits and would be lost without him, there is not a day that goes by without Leroy making me either smile or laugh.”

Voting for Nose of Tralee starts on August 5, with the winner being announced on August 25. Keep an eye on the Pet Sitters Ireland Nose of Tralee Facebook page (@NoseOfTralee) to find out when you can vote for the Longford Nose.