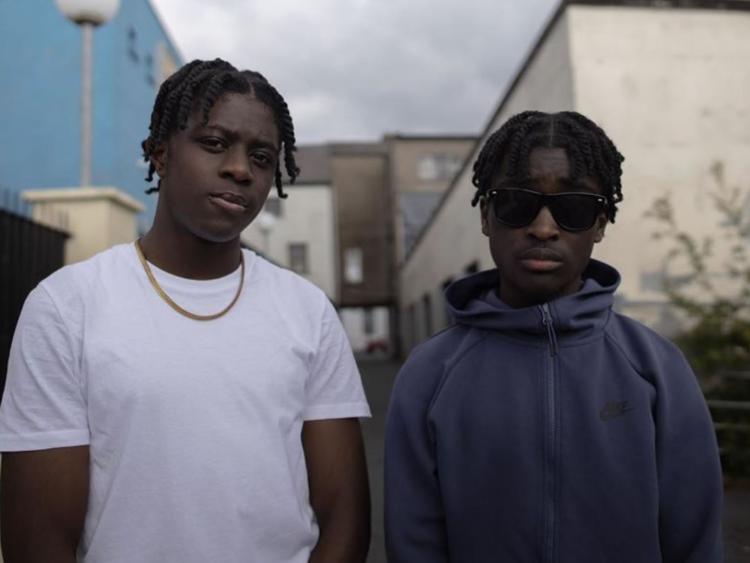 'Apparently there’s no music scene in Longford'. That’s the line that kicks off a brand new music video by local duo, The Academy, who have just released their new song, Longford Town.

And, while Longford has a very rich and diverse music scene, Nevlonne Dampare (aka ND) and Kofi Appiah (aka K Muni) certainly bring something unique to the scene.

The two lads have been friends for a long time and actually started their music career as a joke in 2017 before realising it was something they really love doing.

“One of our friends had a studio, so we went to the studio and we recorded something and we enjoyed it,” Kofi told the Longford Leader of The Academy’s humble beginnings.

“We have five or six songs out right now and we have a few we haven’t released. This year we started taking it seriously. We just started dropping songs,” Nevlonne added.

Both are from Longford town and have grown up here, experiencing the town for what it is and using their experiences to write their own rap music.

“The song was actually written last year, and Nevlonne was at my house, and we heard a beat and ‘Longford town, born and bred’ just came to my head. And after that I started writing from that and it just came together.”

The song is all about the experiences the two lads have had growing up in Longford and, although there have been a few negative incidents, their time in Longford has been largely positive.

“The song is about our experiences with friends, school… at the weekend we go and play ball. So we just write about things like how much fun we’ve had together, so it’s largely positive,” said Nevlonne.

And, while rap is a big part of their lives, they have high aspirations. Kofi is currently a student of NUI Maynooth and is studying business and law, while Nevlonne has just finished school at Templemichael College and hopes to study law in NUI Maynooth.

It’s no mean feat to study law to begin with and, while many would struggle to do both a law degree and continue a music career, Kofi and Nevlonne have a plan in place to ensure they get the best out of their studies, while also following a dream.

“We can get stuff done when we’re on our holidays,” Kofi explained, stressing that both he and his music partner can get new music together quite quickly.

“And when we do go to the studio, we can usually record around five songs and have them. So when we can do the video, we have them ready,” Nevlonne agreed.

“But that’s the risk you have to take when you go into something like this. You have to be prepared for it,” Kofi explained.

And they certainly seem prepared for it. They’re confident that their music will speak to their audience and that they’ll go far, but they’re not going to sit back and take it all for granted either.

“I think it’s very important for everyone to have a backup plan. Education is important,” Nevlonne stressed.

That would certainly be music to the ears of any parent with youngsters hoping to pursue a career in music but the families of these two local rappers are completely supportive of their musical journey.

“Our families are actually supporting us a lot. At first they were a bit iffy about it, but some of the stuff we brought out this year, they really like it. My younger brothers are showing it to their friends. Even my mum showed it to her friends as well,” Kofi explained.

It’s not all positive, though. The recent Black Lives Matter protest and campaign here in Longford highlighted a number of issues with racism in the county and further afield.

“There are a few people out there that are not really liking our stuff. We understand that,” said Kofi.

“Even though we’re black, we’re still Irish. I’m from Longford and I’m proud. That’s why we made this song. I don’t want people saying we’re not from Longford. I love the place and I am Irish.

“In the comments section (on social media), if you read it, there are a few things people say and I try not to let it get to me. In town I’ve had a few experiences from time to time. It’s not often, but from time to time.

“The protest was good. I feel like it publicised what was going on. People were saying it’s only in America, but that’s not the case. It’s everywhere. So I felt like it was good for the march to go ahead.”

“You have to just deal with it and get on with it. I suppose it makes you stronger, so you kind of just brush those things off,” Nevlonne added.

It’s certainly not getting in the way of their hopes for their music, with more songs coming soon.

“We have a lot of songs ready to be recorded,” Kofi explained, noting that Covid-19 has made it difficult for artists and musicians to create.

“We don’t know where we’re going with our next song, but we’re going to start thinking about it. Coronavirus came and messed it up. We would have a lot of songs recorded if Coronavirus didn’t mess it up. Some videographers don’t want to record in the current atmosphere.”

The lads have a range of influences, listing a number of rappers as inspiration for a lot of their music.

“My inspiration is Pop Smoke. He was a rapper in Brooklyn. He passed away but he really inspired me,” said Nevlonne.

The Longford Town music video, which was shot by Isaac Burke, is available to view on YouTube and shows off a number of local Longford landmarks and street art.