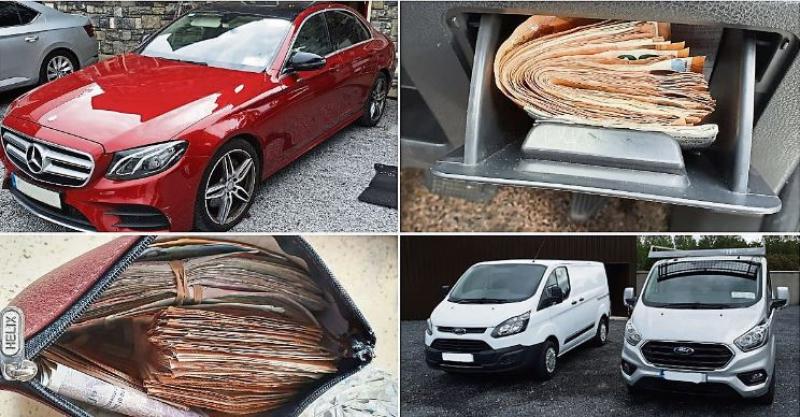 Garda bosses say a “significant blow” has been dealt to a major organised crime family in Longford after several hundred thousands euros worth in cash, vehicles, jewellery and documentation were seized in raids across the county earlier today.

Officers from the Criminal Assets Bureau (Cab) joined with armed gardaí, customs and over half a dozen other law enforcement agencies in carrying out searches across 12 residential properties, three commercial units and a professional holding in an operation specifically targeting a local crime faction involved in drug dealing, extortion and intimidation.

Despite no arrests having been made, garda chiefs are confident “significant questions” both from a criminality and revenue aspect will be made against the main targets of an operation involving over 250 law enforcement personnel.

Chief Superintendent Tony Healy said the size and scope of the initiative was the result of several months of painstaking behind the scenes efforts by gardaí across the Longford Garda Division.

“It’s a matter that is receiving ongoing attention and a number of these people are currently before the courts in relation to different matters,” he said.

“Obviously how we view these is the amount of resources we put into this morning and to assure the people of Longford we have the resources, the skills and the determination to see all these investigations through to the end.”

It’s believed up to 20 suspects were identified by detectives in the lead up to the early morning operation dealt with an extended crime family with links to the Longford town and surrounding area.

A number of those are before the courts at present in relation to separate violent disorder charges with three of those involved having recently been charged over a serious incident in Galway last year in which a firearm was discharged.

Superintendent Jim Delaney described the operation as “unprecedented” and would have far reaching repercussions for its main targets.

“This is the second joint operation we have done with our colleagues in CAB,” he said.

“We made a promise to the people of Longford that we would be relentless in this type of criminal activity and we are showing evidence of that we are keeping our promise.

“This is not the end of anything, this really just another phase and there will be other operations. What this does is it sends out a message that we will address criminality and are prepared to go the long road because we are resilient, we are robust, we have the professionalism to do it and we will meet any challenge they (criminals) want to put to us.”