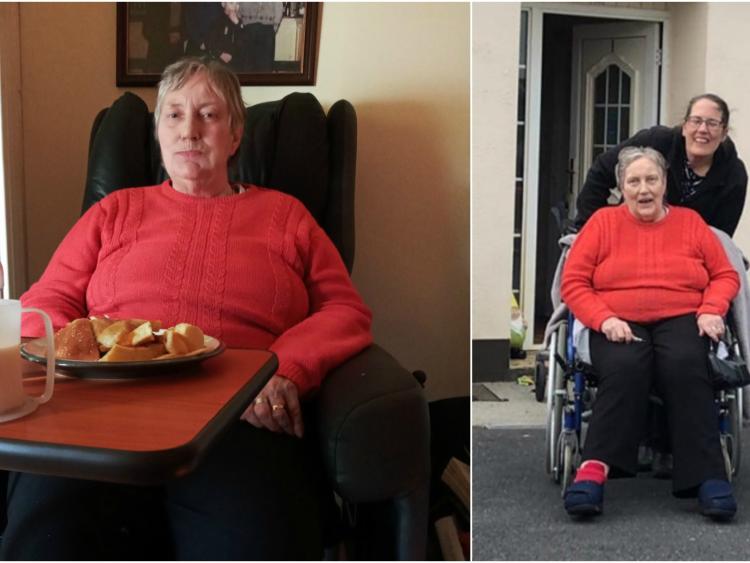 A lot of people don’t realise how serious Covid-19 can be, according to Majella Beattie, who is a full time carer for her mother, 71-year-old Mary Jane Meade, who has recently recovered from the virus and come home.

Mary Jane has a number of underlying conditions, including a lung condition and, when Covid-19 arrived in Ireland, Majella was hoping her mother would not need to be hospitalised.

“But she started to feel unwell and had to go into hospital. They tested her for Covid-19 when she went in and it came back negative,” said Majella.

“She has a history of lung clots and anyone with pre-existing lung conditions is sent to A&E to be tested. She was on the ward on Sunday and, the following Friday, they sent her to the Hermitage because private hospitals were being used as non-covid facilities to care for people who need more support and who are vulnerable.”
Mary Jane was tested again when she sarrived at the Hermitage Medical Clinic in Dublin and it was discovered that she had

Covid-19. She was then sent back to Mullingar Hospital.

“I couldn’t get in to see her. It was so difficult. But the staff were extraordinarily brilliant,” said Majella.

“I couldn't fault them. They did video calls so I could talk to her and see her. The doctor called every two days to give me an update.”

Mary Jane contracted the virus on the Thursday after she entered Mullingar hospital, Majella explained, and she was told that, if she were to develop problematic symptoms, it would be the middle of the following week that it would happen.

“On Tuesday, she started to get quite unwell. They put her on oxygen in the ward but she was confused and delirious. She was struggling to breathe,” said Majella.

“Dr Sheehy rang me on Wednesday and said they had put her in a room and on a high flow of oxygen, which would help to kickstart her lungs. She had very quickly developed Covid pneumonia and, because of her previous condition, she wasn't suitable for ventilation.

“On Friday, the doctor rang me and said she was on antibiotics and oxygen. He rang again on Sunday and said she wasn’t improving. She was not falling asleep and it was hard to wake her up.

“She wasn’t aware of who was around her or what was around her. She wasn’t eating or drinking. The doctor said that if she didn’t improve soon, we would have to talk about palliative care.”

“Someone who is dying of Covid-19 is more contagious because of how hard they’re fighting. So we were told we could see her, but it would be at our own risk.”

By the following Tuesday, there was no improvement and the doctor said that they would keep Mary Jane on the oxygen for another few days to see if she pulled through. She was in hospital for two and a half weeks by now.

“The end of that week, we spoke to palliative care, but she still wasn’t responding,” Majella explained.

On May 26 last year, Majella’s father Christy passed away and, on May 26 this year, it looked like Mary Jane wouldn’t pull through.

“It was my father’s first anniversary and I thought she was going to go. She would fall asleep and not wake up,” she said, but it was at the last moment that her trooper of a mother pulled through and started to show signs of recovery.

“On Monday, they were going to get palliative care for her but she woke up and was looking for water. She was more alert, more aware.

“She was clear of Covid-19 after two weeks but she still had the Covid pneumonia so they left her on oxygen and changed her antibiotics over the next few days and she started to improve.”

By that Wednesday, Mary Jane was fully alert but the virus had done considerable damage to her lungs, which is a cause for concern as her oxygen levels could drop as low as 75%.

It was a joyous day for the family, as well as neighbours and friends last Friday, June 12, as Mary Jane finally arrived at her Longford town home, where she received a huge welcome.

But the past six weeks were filled with terror for her daughter and carer, Majella.

“I asked Dr Sheehy at one point what her chances of surviving were and he said they weren’t good,” she told the Leader.

“I like to be in control so I asked him what exactly her chances were - did she have a 50% chance? He said it was more like two or three percent.

“But she pulled out of it so quickly. It was extraordinary. But it was a horrific experience. The worst part wasn’t the thought of losing her,” she explained.

“I nursed daddy until his death and I’ve always been with both of them. To think I couldn’t hold her hand and be there for her... it was the hardest six weeks of my life and I don’t think I’ll ever get over it.”

Mary Jane herself is thrilled to be back home and was overwhelmed by the messages of good will she received from her friends and neighbours, but there was no denying the experience she went through was extremely difficult.

“It was very traumatic. I’m very aware of the people who didn’t make it and I felt instantly guilty that so many families didn’t get the ending we had. You feel guilty celebrating a recovery when so many people have passed away,” said Majella.

Mary Jane was so lucky to have pulled through, especially at her age and with her underlying conditions. She contracted the virus while immobile in the hospital which, Majella notes, shows how easy it is to get it.

“People don’t know enough about the virus. I think that, because we didn’t get the massive influx we were expecting, people don’t realise how bad it gets.”

For that reason, it is so important to follow government guidelines to ensure the spread of Covid-19 continues to slow in Ireland. But the reopening of businesses, along with some public gatherings have been cause for concern for Majella and other families who have experienced the virus.

Majella was very concerned by plans to host a Black Lives Matter protest in Longford last Saturday, because the virus is not yet gone from the country.

“I was very nervous to speak out about it because you can so easily be branded a racist, but that’s not where I’m coming from,” she said.

“Obviously, that march is very positive, organised by young people. Eric Ehigie has a fantastic future ahead of him. I see him as a junior Leo Varadkar,” she said of the protest’s organiser.

“But they don’t know the experiences families like mine are going through and don’t realise the dangers and how easy it is to pick it up.

“They could pick it up and go into a nursing home and pass it on. I think that protest could have been done virtually, and then a larger march later on. It just wasn’t the right timing and it was like a slap in the face.”

Majella also hates the slogan ‘I can’t breathe’, which is being used as part of the Black Lives Matter movement. She says this is insulting because of what her mother had to go through just before the protest took place.

But Majella emphasised that her issue is not just with gatherings such as the BLM protest on Saturday afternoon. She has the same issue with large queues for Penneys and other stores that are starting to reopen.

“People need to be aware that it’s not gone away and how bad it is. And it’s not just a flu. My uncle died from a flu and he didn’t go through what my mother went through.

“The deterioration I saw in her on our video calls every two days was mind boggling. She lost five stone over six weeks.”

But the staff were amazing in Mullingar Hospital, she added; “I have to commend the staff who are leaving their own families and children and possibly not seeing them for weeks so that they can be with our loved ones.”

Mary Jane is home now and enjoyed a lovely evening on Friday, where she received a large number of well wishes, balloons and even a cake to celebrate her recovery, which she puts down to her strong faith.

It’s been an incredibly long six weeks for Mary Jane Meade and her family but she pulled through and that is a testament to her strength.