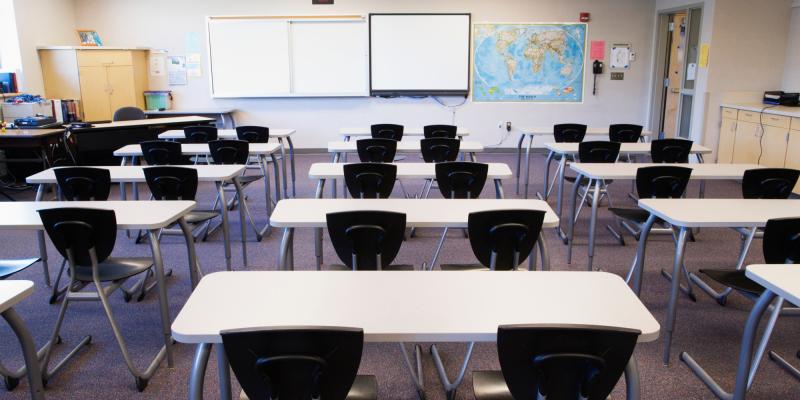 Government plans to reopen schools with social distancing guidelines of two and even one metre restrictions has been described by one Longford secondary school principal as "not practical" and almost impossible to implement.

Declan Rowley, principal of St Mel's College in Longford town said recent murmurings surrounding moves to reopen schools in September would simply not work given the spacing requirements that are needed in present day classrooms.

He described a Department of Education planning document released over the past few days as being incompatible with the demands facing both teachers and students on a daily basis.

"I read the document and it really doesn't make any sense at all," he said.

"In fact, it contradicts itself and doesn't set out a roadmap at all."

A Department of Education study brought to Cabinet on Friday argued even if the current two-metre distancing requirement was reduced to one metre, certain year groups in secondary schools would be able to attend only 50 per cent of the time.

It was a similar scenario confronting primary school pupils with students only being allowed to attend school for 2½ days out of five.

Mr Rowley's sceptical appraisal of the proposals followed similarly blunt reactions from parents and opposition parties who have hit out at how the plans have sparked confusion and given conflicting signals about the relaxation of social distancing rules.

"Even if the 2m rule was kept, our classrooms being around 40sq metres in size would only be able to take around seven students and if it was brought down to one metre you'd still only be able to have 12 or 13 students present at any one time.

"That works out at only about half of our classroom sizes which is going to be very difficult to work," he said.

"Hopefully, this thing (Covid-19) will be suppressed but the teachers are adults and to try and isolate yourself from the group will be difficult as well," he contended.

He said teachers were very much keen to return to work and heaped praise on how remote learning over the past two months had brought new skills to the educational table for both staff and pupils alike.

Equally, Mr Rowley said a culture of home teaching had compromised the priority placed on the standard of education which would otherwise be meted out in a day to day school environment and called on government chiefs to think again about their plans to reopen educational facilities in September.

"I just think they (Department of Education) should wait until the end of June as there will be a surer road and because this report means nothing," he said.