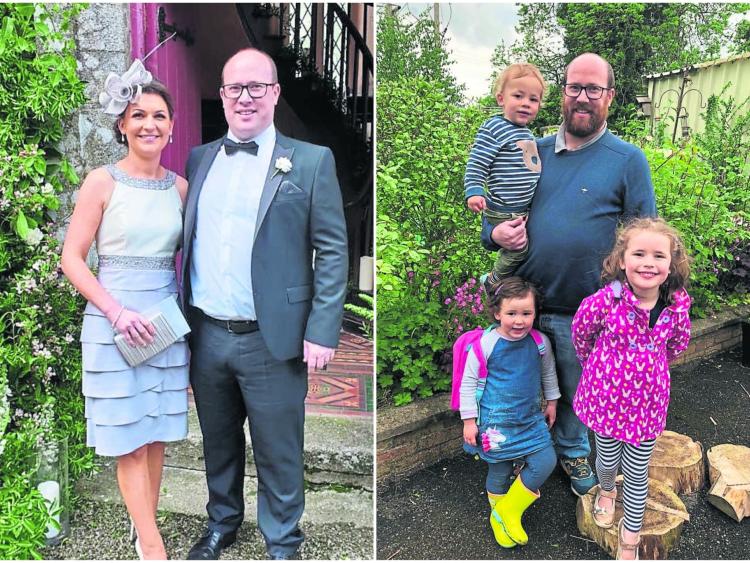 Left: Jason Clendenning and his wife Diane. Right: Jason complete with the beard he is about to shave off on May 30, pictured with his three children Emily, Lydia and Ben

A Longford man, diagnosed with multiple sclerosis in late 2015, decided during the Covid-19 lockdown to grow a beard and he will shave it off to raise much needed funds for the MS Society of Ireland.

Jason Clendenning, originally from Rockspring, Ballymacormack, has set up a JustGiving page ‘Jason's World MS Day Beard Shave’ and he will lose his beard on Saturday, May 30 which is World MS Day.

As of Tuesday morning, Jason’s appeal has raised €4,000, and he says all donations are greatly appreciated.

He added, “Thankfully, I have been in relatively good health for the past few years, with only one or two minor flare ups along the way.”

Jason received his primary education at St John's National school on the Battery Road in Longford town and Stonepark National school. He began his secondary education in St Mel’s College in 1997, and moved to Wilsons Hospital in 2001 before progressing to UCD in 2003 where he studied Ag Science (Food Science).

Jason graduated in 2007 and moved to Tralee where he worked with the Kerry Group for a number of years. He adds, “I had a great time working with the Kerry group and spent a few years working in Leeds and Dublin as well.”

After Jason and Diane tied the knot in 2013, they decided they would try to move closer to home so they moved to Mullingar.

“I spent some time working in Panelto Foods in Longford and then moved to Lakeland Dairies in 2014. I'm currently working in their Cavan office.”

Jason played underage rugby with Longford RFC and also senior rugby with them for a short time.

He also enjoyed soccer and gaelic football. “Back around 1997 or so, I used to play a lot of soccer with Vale Celtic. We had a very good team but GAA then started to take over and I played gaelic football with Longford Slashers for a few years. I finished playing with the seniors around 2007 due to work and injuries but played a bit of junior football with them over the years.”

Jason revealed that not a lot of people may not be aware of his MS diagnosis just over four years ago and he says that all money pledged to his JustGiving page goes directly to the charity, MS Society of Ireland.

(Please note, if you open the camera on your phone and point it to the barcode it brings you straight to Jason’s JustGiving page)