So... what are you looking forward to? Longford's Fr Joe McGrath encourages gratitude 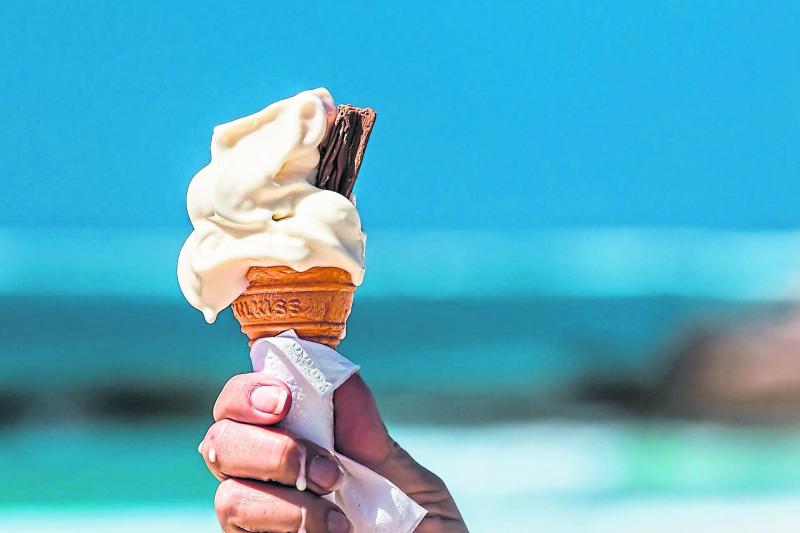 My brother Michael tells a funny story about a car journey with a friend of his, from Longford into the West some years ago. It was a beautiful summer day…blue skies…puffy clouds…sun shining…in fact, you might say, the perfect day for an ice cream!

So as they left town, he suggested to Maureen that they stop in Tarmon just a few miles down the road to get a cone and she clapped her hands at the thoughts of it…what a great idea!

A few minutes later, driving through Tarmon, just then, there happened to be a huge lorry right in the middle of the shop forecourt, so as he was the one behind the wheel, he just kept looking straight ahead and belted on to Strokestown….

There was bound to be somewhere there in Strokestown to get the ‘99’! Crawling painstakingly along the street both had their eyes keenly peeled for the giant cone display but apparently, Michael would say, it was only as they were leaving the town to continue their journey westwards that off a side-street shop he spotted an enormous jolly cone in his rear view mirror…

Not to worry; Tulsk was only a stone’s throw away……no joy in Tulsk….

“…says he…there’s no point in leaving the main road now just to get an ice cream…there’s bound to be somewhere more convenient….”

And so, after the whole journey was finished, they had their eagerly awaited 99s… the sun shining brighter than ever… the ice cream way cooler than either had imagined it might be… the laughter eventually breaking through the silence and….. a truce of sorts!

That story kept coming into my mind this last few weeks as we began to hear all kinds of tips and advice about how to get through this unusual journey that we are all on at the moment… getting from one point to the next… and then to the next… and the next… looking forward all the time to the “ice cream” around the next bend.

Michael’s retelling of that story is always very funny, particularly the increasingly comical reaction of his friend Maureen becoming more frenzied (and he laughing away to himself quietly) as they would sail on by the next shop on the road and during these days, it is that idea of having something to look forward to that strikes me most of all about that journey… they just kept going on and on and on until they finally arrived at their journey’s end in Castlebar.

So when this current journey is over for all of us, whenever that may be… what are you really looking forward to most of all?

What is keeping you going? What kind of ice cream will you pick?

Some years ago, I happened to meet the late Dr Anthony Clare, one of Ireland’s foremost psychiatrists who, over his life-time, helped so many people to protect their own mental wellbeing.

Clients of his have told me that when they would meet him for an appointment, he would listen intently to their story about how they were coping over the previous few months and finally when they had completed their account he would say something like…

Dr Clare put huge kudos on the challenge we all face to always have something to look forward to in life.

Then, after that, it was about having something to look forward to in the mid-term over the next few weeks… maybe a show or a new film… maybe a family gathering… maybe a trip somewhere…

And finally, Dr Clare would ask about the long-term view regarding what someone might be looking forward to down the line… months even next year… maybe it was a weekend away or a holiday… maybe it was a son or daughter coming home from abroad… maybe it was about an upcoming get-together with friends…

The key was that you worked deliberately to keep happy things on your horizon that you could look forward to no matter what you might meet on the road ahead… he never accepted that money was an excuse (although he would admit, some money is necessary)… it did not necessarily mean looking forward to buying something… and if money was an issue, see might there be a way around it… in fact many of the things that we might look forward to can be creatively re-imagined with tighter financial means.

So insistent was Dr Clare on this key life tip that during that first session at the very beginning of the healing relationship, both client and doctor would make three columns on a sheet of paper so that they could explore the possibilities in writing about what there was to look forward to in the time ahead.

And after each session, homework was a very deliberate instruction to work on this actively and consciously every day until the next appointment.

Obviously with Dr Clare, this was only one small part of the process of mental wellbeing along with other aspects of medical psychiatric care and he was well aware of the fact that such advice was a “baby step” towards overall wellbeing.

Nevertheless, down through the years, I have often turned again and again to his counsel to keep my own life horizon looking brighter, especially when there might have been dark clouds gathering over my head at the time.

And dark clouds, there are over all of us right now.

The world health situation is proving to be quite a challenge for even the strongest among us and I have no doubt in my mind that we all have to make a deliberate effort to keep our emotional, spiritual, mental, personal as well as physical wellbeing in a healthy balance for the journey still to come.

Other times, we just have to get up and put them there for ourselves (and perhaps put up things for others too… in the giving we receive… St Francis).

Even during the good times, I love working with children and young people on this life tip and I ask them to draw wild colourful imaginative pictures of what they are looking forward to in their lives and I suggest to them to hang them up all over their room… simple things… it doesn’t have to be “out of this world” treats… just some little things to keep them going, whenever they might be feeling a little down in life!

The hidden beauty of Anthony Clare’s wisdom was that on the flip side of that coin was gratitude. Thankfulness as we look around at the everyday joys of life that in the rush and tumble of time we sometimes maybe take for granted.

Gratitude for the very breath of life itself as the golden road to personal wellbeing.

Some morning, we will wake up and we will be free again.

So, what are you looking forward to?