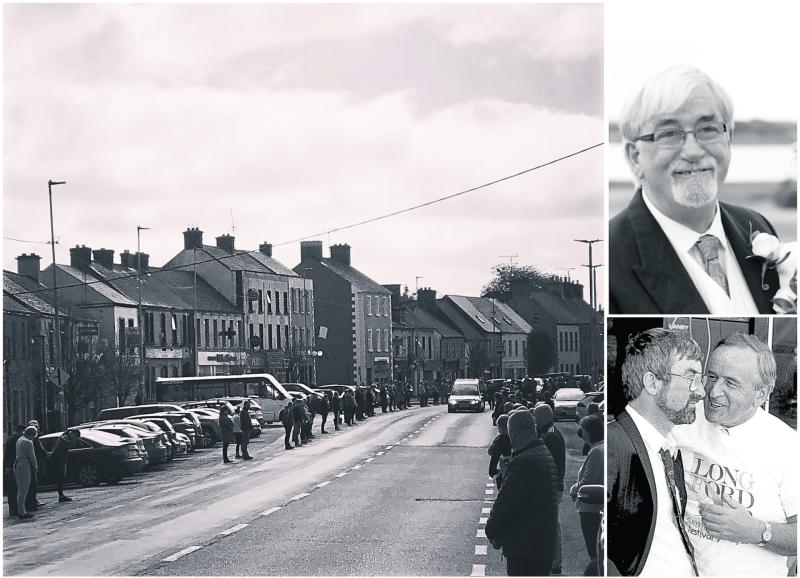 Longford and Ballymahon, in particular, was saddened upon hearing of the death of well known publican and undertaker, Ronnie Nally, The Corner House, Ballymahon on Tuesday, April 14 at the Midland Regional Hospital, Mullingar.

Son of the late Hugh E & Kathleen, Ronnie, aged 70, passed away peacefully following his long illness which he bore with great dignity.

A past-pupil of Ballymahon Mercy Secondary School and St Mel’s College, Longford, he started his working career in the supermarket business and then in the Blue Lagoon Pub, both in Sligo, and from there he spent some time working in Castlebar.

He then joined the family pub business and married his wife Mary in 1979 and took it over with her 32 years ago. They have been running the pub successfully ever since. He always had a great rapport with his customers.

Ronnie and Mary also run an Undertaking business which they have been doing in a highly professional manner, always being sensitive and compassionate towards the families of the bereaved in their own unique way.

As a publican, Ronnie has always been a generous sponsor to various organisations in the town and its surrounds and had his well-known large bottle on the counter for many years where customers donated their change which resulted in sending lots of sick children to Lourdes.

He held many positions in the Vintners organisation and was Chairman there for a number of years where he organised many great Vintners annual dances. He was a former NEC Delegate to the National Vintners Organisation and attended Congress every year with Mary.

He enjoyed many sporting activities, both as a player and spectator. He liked to go to the races all over Ireland and particularly liked to go to Killarney and Listowel regularly with his wife Mary. He also went to the races in York every year with his cousin Joe enjoying the flutter on the horses.

He was a prominent member of Ballymahon senior football team for a number of years and also played with the Red Devils Soccer team where he was a very effective free-taker. He was also a staunch Dublin GAA follower.

In a tribute to Ronnie on Facebook, Ballymahon GAA wrote: “Ronnie was a constant in the Ballymahon team throughout the 1970s, winning a Division 2 league and a Hughes Cup in 1977. He plied his trade predominantly in the full forward line, and he was a noted marksman with a particular eye for a goal.

“Although it was a relatively lean time for silverware in the club, Ronnie still managed to be part of several landmarks in the club annals. In 1974, he was part of the first Ballymahon outfit to beat Longford Slashers in the senior championship. Along with his brothers Niall and Paul, Ronnie made up the first trio of brothers to play for Ballymahon on the same team in senior championship football – versus Ardagh also in 1974. Adding in the contributions of Tommy & Louis at various stages, they hold a joint club record of five brothers to play senior football for the club.”

Ronnie loved a game of golf and was a member of both Longford and Glasson Golf Club and was also Captain of the Vintners Golf Society and the Inny Golf Society. He also loved music and enjoyed reading, always keeping up to date with current affairs.

“Many performances were critiqued over drinks at Nally’s bar where we were always welcomed and made feel at home. Many a sneaky pint was had during a play interval and if truth be told we were often a few audience members down in the second act when the lure of Ronnie’s pints took over. It wasn’t just the pints that lured people in, it was Ronnie’s genuine good nature and good company and he will be truly missed by us all.”

Ronnie was a great family man, he spoke proudly of his two children Marc and Katie at all times and loved to spend time with his three beautiful grand-daughters; they were his pride and joy.

Ronnie was always a very decent and generous man, quick-witted and knowledgeable. A likeable gentleman who was always good company to be with. He will be sadly missed by his family and friends, his many customers and fellow Vintners.

His Funeral Mass, celebrated by Fr Liam Murray, was held on Thursday last, April 16, in St Matthew’s Church where Ann Keenan provided the beautiful singing with accompanist Padraig McGowan and the Eulogy was read by Ronnie’s brother Niall.

A Guard of Honour was formed on the route from ‘The Corner House’ to the church by Ballymahon GAA and many friends, and lots of people also lined the road out to Forgney Cemetery where he was laid to rest, showing the high esteem which has always been held for the Nally family.