Late Austin Reilly: As a family we were together on Zoom. Granny led the rosary and Fr Joe said mass 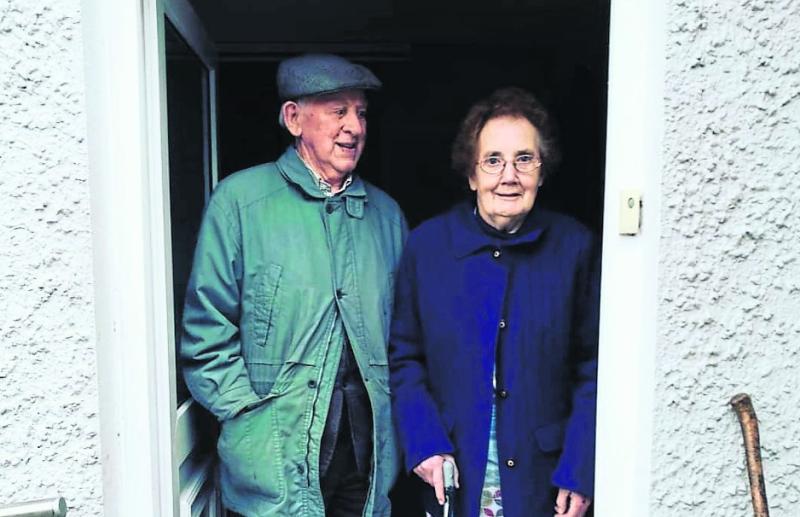 The late Austin Reilly, Kilsallagh, Edgeworthstown, Longford and his wife Mae. This article and photograph was kindly submitted by his grand daughter Eimear Reilly

My Grandad Austin Reilly passed away peacefully on Tuesday evening, March 31. He celebrated his 94th birthday on St Patrick’s Day where he stood at the front door and we sang Happy Birthday through an open car door window.

He was a remarkably fit and healthy man, who right up to his final day continued to carry out the same daily rhythm on the farm that I remember as a small child over 20 years ago. He loved horses, was always calm and steady and you would never leave without a good one liner of advice from him.

Granny’s kitchen has always been the heart of family life at home. After university whether I was living abroad or elsewhere in Ireland, there was a comfort in returning home where I knew the rhythm of the day was always the same.

The cows were milked first thing in the morning, breakfast was at 9.30am, brown bread was baked, dinner was eaten in the middle of the day at 1.10pm and the radio was always on, tuned to Shannonside FM where local news and country music sound tracked the everyday.

An unmistakable slow string melody – a tune which I still to this day know off by heart, would signal the death notices, which were played multiple times a day.

Chattering grandchildren would be shushed and my grandparents listened quietly to the funeral arrangements of people who had died across the midlands and north west.

“That’s a funeral for you,” Granny might say and Grandad would nod. The following evening he would drive to Aughnacliffe on the Longford/Cavan border or south towards Athlone on the banks of the Shannon and attend the removal of a person he might have bought horses from, a cousin, an old friend or a parishioner.

Due to Covid-19 regulations wakes, removals and funerals are temporarily no longer a part of everyday life in Ireland. Grief and death has had to adapt to this new way of being.

As a family we were together on Zoom where Granny led the rosary and Fr Joe said mass. Instead of a wake Granny receives phone calls from neighbours and friends.

We scroll through the online book of condolences for Grandad on RIP.ie where people express their sympathy.

On Friday, April 3, his remains were brought directly from the mortuary to the grave where only his children will attend, standing a safe distance apart from one another.

One of the most fantastic things about Ireland is our sense of community. So many organisations whether they are social, sporting or charitable are built on a strong community spirit.

And in grief, there is no greater display of community from the reflective yellow vests of local farmers directing traffic into their fields, to the countless trays of sandwiches made by neighbours to feed the hordes of visitors at a wake, to the queues of people waiting in line to pay their respects.

You don’t realise how much of a soothing balm and support the ritual of funeral is until it’s no longer there.

The N4, normally a busy road between Dublin and Sligo, was quiet on the day of Grandad’s funeral except for lorries carrying freight, local tractors and a handful of cars. After midday as the hearse made its way past Lough Owel on the outskirts of Mullingar and drove the 20km towards the graveyard in Edgeworthstown, the road was lined with neighbours and friends standing outside their houses and their parked cars at the top of side roads as the hearse drove by.

This showing of community is something which has given Granny immense comfort since the burial.

A fortnight ago, Grandad’s obituary was broadcast on Shannonside FM alongside the other people who have passed away and

I’m glad that one of those rhythms of my Grandparents’ daily life can remain in these strange times.