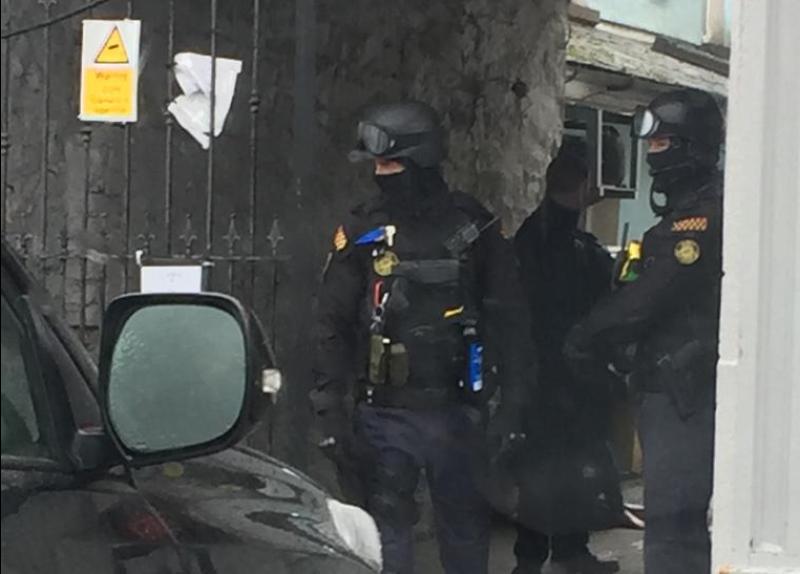 Two men charged with possession of €200,000 worth of drugs after a raid at an apartment in Ballymahon on Thursday afternoon have been denied bail following a special sitting of Longford District Court yesterday evening (Friday).

Gardaí and the Armed Support Unit searched the Ballymahon premises on Thursday afternoon under a warrant obtained by Mullingar District Court.

Giving evidence against Mr Skupinski yesterday evening, Sgt David Bunn explained that entry to the apartment was forced and that members of An Garda Síochána and the Armed Support Unit identified themselves before entering.

"Both occupants jumped from the first floor window and tried to escape," he said.

"During the course of the search, large amounts of drugs were found including ecstasy tablets in the common area. The defendant (Mr Skupinksi) was caught red handed trying to escape. He resisted arrest, violently."

Sgt Bunn expressed his concern that Mr Skupinski would not attend court if he was granted bail.

"He has no reason to reside in this jurisdiction. He may abscond. He has no family or relations here," he said.

Solicitor for the defence, Bríd Mimnagh, explained that her client has only been living in Ireland for a short time and had only been residing at the premises for a number of weeks.

"He had been working in the UK for a number of years and he's working in Kepak now," Ms Mimnagh explained, adding that her client was hoping to bring his pregnant girlfriend and three-year-old daughter to Ireland.

"He won't be a flight risk because he can't get a flight to Poland in current circumstances."

When Mr Skupinski took to the stand to give evidence, Ms Mimnagh asked him if he was prepared to stay in the country and come to court should he be granted bail. The accused confirmed that he was.

"Gardaí say that you tried to escape and were aggressive," Ms Mimnagh put to him.

"I wasn't aware they were police. I went to the roof and fell down. I didn't want to escape but I didn't know who they were. They weren't in uniform and didn't show me identification," said Mr Skupinski via a Polish interpreter.

The court heard that Mr Skupinski had one previous conviction from 2009 but has had no trouble since.

He explained that, should he be unwelcome at his Ballymahon apartment, he has somebody to stay with if granted bail.

"Do you understand the seriousness of these charges?" asked Sgt Paddy McGirl on behalf of the state.

"Are you aware that you could be facing up to ten years in prison?" asked Sgt McGirl.

"He said in evidence that he wasn't aware it was guards coming in," said Judge Mitchell.

"Entry was forced. The Armed Support Unit identified themselves. I identified myself when they came off the roof. There were uniformed members when he came out," said Sgt Bunn.

"Would he have seen them from the roof?" asked Ms Mimnagh.

Sgt Paddy McGirl explained that the state would be objecting to Mr Skupinski's bail with the view that he is "a flight risk".

"He has an address at present but he has family in Poland," he said.

"The Sergeant must know more than I do because I don't think he'd be able to get a flight at the present time," said Ms Mimnagh.

"Within 40 minutes he's across the border to Northern Ireland," said Sgt McGirl.

The co-accused, Konrad Semeniuk, appeared in court on crutches and with a cast on his foot, having broken it when falling from the building on Thursday afternoon.

The defendant was charged yesterday evening by Gda Brian Carroll with the assistance of a Polish interpreter.

Gda Carroll explained to the court that gardaí were objecting to Mr Semeniuk's bail application due to the seriousness of the charge.

"When we searched the premises, he fled from the first floor window. He resisted arrest and he broke his foot when trying to get away," he said.

He added that a large quantity of drugs was found in Mr Semeniuk's bedroom. Gda Carroll explained that the accused had admitted to taking possession of the drugs and bringing them to his home.

The accused also admitted in his interview that he knew it was gardaí at the property.

Solicitor for the defence Bríd Mimnagh explained that her client has been living in Ireland for two and a half years and that he is currently working as a casual labourer for farmers in south Longford.

She pointed out that Mr Semeniuk wasn't uncooperative when being interviewed. Gda Carroll agreed.

"He has no reason to leave the country," said Ms Mimnagh.

"He indicated to us that he just wanted to be deported back to Poland," said Gda Carroll.

When Mr Semeniuk gave evidence, he confirmed to Sgt McGirl that he was aware of the seriousness of the charges against him but said he was not aware of the ten year prison sentence he could face.

"This is my first time in this situation," he said via an interpreter, adding that he had taken the package of drugs from somebody and housed it in his apartment.

"I realise it was a big mistake I took the package. It's my fault only. I apologise," he said.

When Sgt McGirl brought up the alleged escape attempt, Mr Semeniuk said that he didn't know gardaí were coming and that he had just heard a loud noise.

"It was just a really big noise. If I knew it was guards coming, I never would have tried to escape," he said, adding that he wasn't rough or aggressive with gardaí.

"He had to be restrained," Gda Carroll disagreed.

"Nobody told me to stop," said the accused.

"Several armed gardaí told him to get on the ground," Gda Carroll insisted.

Sgt McGirl explained that the state was objecting to bail because he was caught red handed attempting to evade the gardaí.

"He has a wife and a son (4) in Poland and I believe if he was granted bail, he would attempt to evade justice," he said.

Taking on board all of the evidence and the concerns of the state, Judge Mitchell made the decision to refuse bail to both of the accused.

"I'm taking it based on the evidence that (they were) attempting to evade justice. That is my primary concern," he said.

"It is recommended not to remand in custody at this time," he said, but added that this was a serious matter

Both men have been remanded in custody to Longford District Court on Tuesday, April 7.