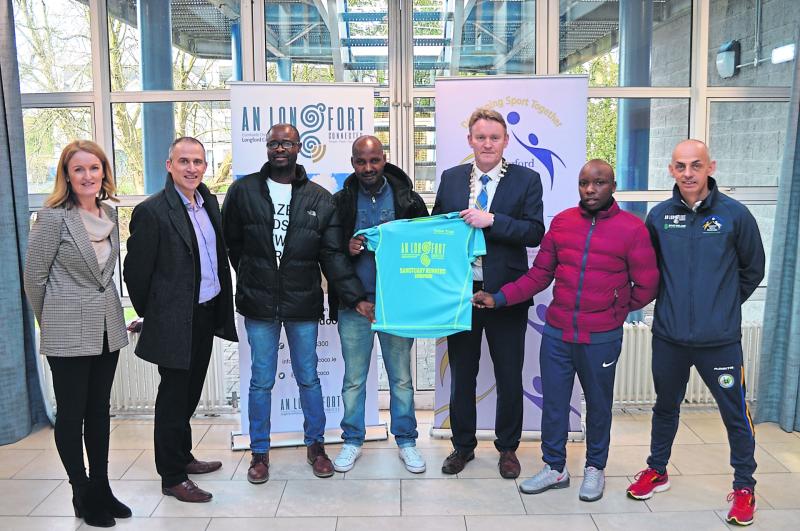 In funding the tops through its community grant scheme, the Council is showing its support for this award-winning initiative which focuses on solidarity, friendship and respect between the local community and those asylum seekers living in Richmond Court in Longford town.

The all-male accommodation centre is one of 35 Direct Provision sites across the country and accommodates 80 people.
“Midway through 2019 I decided to set up a group of the Sanctuary Runners in Longford and the support we’ve received has been amazing,” said Gavin McHugh.

He added, “The local parkrun group has been amazing, and we run most Saturday mornings down at the Mall in our blue tops.
“The whole point of the group is not just to help the guys in the centre to run but to get Irish people running with them and we’ve had so many local people join the group.

“We focus on solidarity, friendship and respect and it's so important for everyone to be physically active – but especially for those living in Direct Provision.”

A group of 40 Sanctuary Runners took part in last year’s Abbott Longford Marathon with a group making the trip from Dublin and its hoped an even bigger team will take part this summer, some running the 5k distance - but others taking on the full or half marathon challenge.

“This initiative is simple but powerful. It benefits both the Irish people who may never have chatted to an asylum seeker before to better understand the immigration system and those within. At the same time it helps these young men, many who are struggling, to better understand Irish culture and to make friendships with local people.

“It builds a very important bridge between the two communities and helps us to see all we have in common rather than focus on any differences that may exist between us,” said Sanctuary Runners’ founder and national coordinator Graham Clifford.

The new running tops are emblazoned with the words ‘Sanctuary Runners Longford’ on the front and the county crest. And on the back the words ‘Solidarity, Friendship, Respect.’

Recently, the Sanctuary Runners was named as Ireland’s ‘Best Community Sports Group’ in the country at the All Ireland Community and Council Awards in Croke Park.

This year the Longford Sanctuary Runners will travel south to take part in the Cork City Marathon on Sunday, May 31 and are always looking for new members and supporters.

If you would like to join then just email Gavin at SanctuaryRunnerLongford @gmail.com or to find out more about us visit Sanctuaryrunners.ie or find us on Twitter @Sanctuaryrunner