Coronavirus crisis could go on for months, says Taoiseach

An Taoiseach addresses nation on 'a day we will never forget' 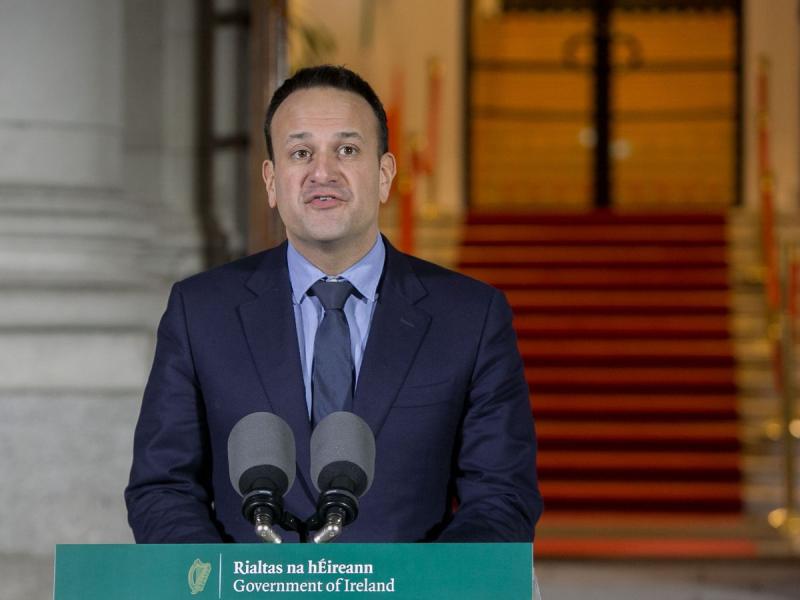 The coronavirus situation could continue into the summer, according to An Taoiseach Leo Varadkar who addressed the nation tonight.

He referred to this St Patrick's Day as "a day we will never forget" but said that he hopes we will tell future generations that "when things were at their worst, we were at our best".

We are "in the middle of a global and national emergency, the likes of which none of us have ever seen", he said but stressed that the vast majority of people who contract the virus will experience mild symptoms.

It is, however, important to be mindful of the more vulnerable members if society who are at higher risk.

"We cannot stop the virus, but working together we can push it back and stop it in its tracks," he said.

Going forward, he said, it's important to take steps to reduce human contact, not just at public gatherings and in public places but also in our own homes.

He said that choices to cancel events and weddings "will not be easy but they are necessary".

"We will learn from the experiences of other countries affected by the virus before we were, what works and what doesn't," An Taoiseach explained.

There are currently restrictions in place until March 29 but An Taoiseach has said that the virus is likely to be around into the summer months.

Despite that, the full resources will be deployed to ensure that the supply chain stays open and shops are still in operation.

A number of measures are recommended to prevent the spread of the virus, including adjusted opening hours, staggered breaks, phone calls and online conferences, working from home, as well as online shopping and delivery services.

An Taoiseach added that it is "important that we come together as a nation by staying apart" and that handwashing and proper hygiene is essential.

If you have a new cough that won't go away, it is important to contact your doctor who will be able to refer you for a coronavirus test if need be.

"At a certain point we will advise the elderly to stay home for a number of weeks," he said, adding that this is called "cocooning" and "will save many lives".

"Hard as it is, we need to keep our physical distance to stop the virus," he said.

It is important to call your neighbours and check on anyone who is living alone, he added.

Addressing the young people of the nation, he said that he understands how difficult it is to be at home and that, while young people are "bored and fed up" and eager to go out and see their friends, it is important to "wait a little longer" and to help their parents whenever they can.

The Taoiseach also praised those on the front line - "not all heroes wear capes," he said - and asked that others support healthcare workers and emergency services and gardaí wherever they can.

"This is the calm before the storm... before the surge... and when it comes - and it will come - never will anybody ask so much of so few," he said.

The Taoiseach noted that the virus is a cause of "huge stress and anxiety" across the nation "on top of the fear of the virus".

Income support will be available as quickly and efficiently as possible, he said, but "everyone in our society must show solidarity at this time of national sacrifice".

"We need to halt the spread of the virus, but also the spread of fear. Fear is a virus in itself," he added, stressing that people should follow information from trusted sources like the HSE, the WHO and the national media only, and ignore social media messages that are being spread.

He asked people to take regular breaks from social media and the news and to avoid constantly checking updates and to look after their mental health instead.

"We are in this together," he said in a message to the world.

"Tonight I send a message of hope from Ireland to everyone around the world."