Bad weather predicted for the weekend 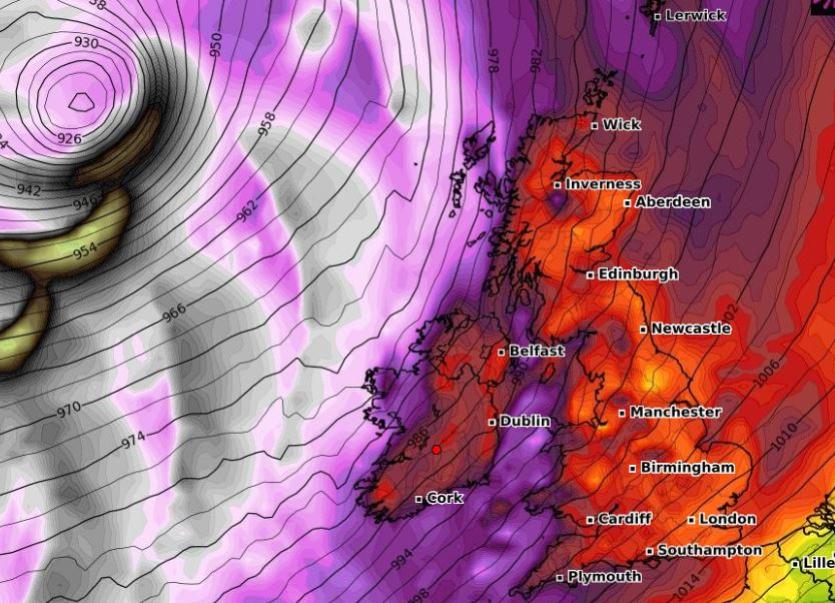 Met Éireann has issued weather warnings for Storm Dennis which is set to hit Ireland this weekend bringing gales and heavy rain which will carry a high risk of flooding.

Just a week after Storm Ciara battered Ireland a particularly powerful jet stream is driving another powerful storm across the Atlantic.

The Status Yellow alert for all of Ireland warns of spells of heavy, locally thundery rain, on Saturday that will lead to some flooding. It is valid from 6am to 9pm on Saturday, February 15.

Weather Advisory for all of Ireland says Storm Dennis will bring some very wet and very windy weather over the weekend and into Monday. It warns some flooding is likely and damaging gusty winds with some disruption possible. It is valid from 3am on Saturday to noon on Monday.

A Status Yellow Marine gale warning is also in place.

The weather forecast for Storm Dennis says that the weather through the rest of the weekend will be very disturbed. Met Éireann says the storm centre will be well to the northwest on Saturday night but coming closest to us later on Sunday. More below tweets.

Our 7 day Atlantic Chart shows the precipitation and pressure forecast in 6 hour intervalshttps://t.co/9Giuj4UrWU

A nationwide forecast and outlook covering the next week can be found here. https://t.co/9gKN6SDMVu pic.twitter.com/gDBlKetKnJ

Low pressure systems will keep on coming through the next few days. Here's a look at the bigger satellite ️ picture showing tomorrow's weather and the early stages of #StormDennis pic.twitter.com/7Xg00utOux

TONIGHT
Cool, and mostly dry early tonight with clear periods. Some frost in places for a time mainly northern and eastern areas as temperatures fall to between 1 and 5 degrees Celsius. Frost clearing as rain and strengthening southerly winds extend eastwards later tonight.

TOMORROW - SATURDAY 15TH FEBRUARY
The influence of storm Dennis will be felt on Saturday with the storm centre between Iceland and Ireland. There will be very heavy rain countrywide with flooding in places, strong and very squally south or south to southwest winds with gales or strong gales on coasts. Winds will moderate inland through the afternoon and evening. Afternoon temperatures of 10 to 12 degrees Celsius.

NATIONAL OUTLOOK
Very disturbed weather through the rest of the weekend, with storm Dennis continuing to affect us. The storm centre will be well to the northwest on Saturday night but coming closest to us later on Sunday.

Saturday night: Further spells of heavy rain overnight with some thundery downpours likely and further flooding. Winds easing for a time inland, but gales will continue in coastal counties.

Sunday: Extremely windy and very showery on Sunday with stormy conditions in Atlantic coastal counties, especially northwestern counties, with very severe and squally winds. Widespread heavy rain and hail showers with thundery downpours at times, but drier and brighter at times in parts of the east and south.
Cold with afternoon temperatures of 4 to 8 degrees Celsius with a very significant wind chill factor. Showers and extremely windy conditions for a time on Sunday night.

Early days of next week: The severe winds will ease by Monday morning, but both Monday and Tuesday will still be windy and cold days with sunny spells and heavy blustery showers, especially in southwestern, western and northern counties. Some of the showers turning to snow at times, especially on higher ground. Drier in the south and east. Afternoon temperatures of 4 to 7 degrees Celsius with some frosts by night.