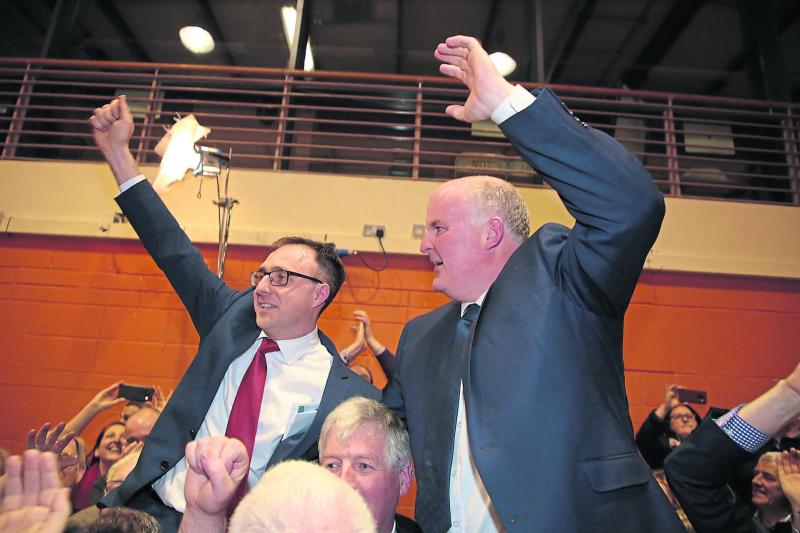 Robert Troy and Joe Flaherty are hoisted onto the shoulders of their supporters following their election on Monday night PICTURE: SHELLEY CORCORAN

If there are awards and possible junior ministerial posts going abegging in the next government then Fianna Fáil’s Robert Troy must surely be in line to claim such a mantle.

That’s of course very much hinged on whether Mount Street party chiefs shake the hands with Sinn Féin on the formation of Ireland’s next government over the next number of days.

Either way, the Ballynacargy postmaster is undoubtedly well placed to secure a key front bench position after securing his return to Leinster House for the third successive time.

More noticeably however, was Mr Troy’s conscious decision to adhere to the party’s pre-election strategy of waging a campaign purely on the back of the Westmeath end of the county.

It was a bold move considering only four years previously Mr Troy had managed to attract over 1,700 Longford votes, a statistic he and his closest confidantes acknowledged would not be repeated this time around.

But this, for Mr Troy and those in Fianna Fáil, wasn’t an election about numbers or personal ego trips, it was an election aimed with one overriding goal in mind - to return two seats to a constituency bereft of two TDs since 2007.

“We went into this election with a clear strategy, a strategy which was to return two TDs from this constituency to help bring about an alternative government,” he said.

“I am delighted over the role I have played in what was a very strict vote management in terms of dividing the constituency between myself and Joe (Flaherty).”

That said, Mr Troy expressed his disappointment at Fianna Fáil’s inability to capitalise on the collapse in the Fine Gael vote nationally.

He conceded Fianna Fáil’s decision to enter into a four year confidence and supply arrangement with Fine Gael had played a part in limiting its own vote while also playing into the hands of Sinn Féin.

“It says the electorate resonated to some of the things Sinn Féin were saying and what it said was people wanted an element of change,” he said.

“There was a difficulty on our part to demonstrate that we would be an alternative and that they would be getting a change with Fianna Fáil despite acting in the national interest for the last four years in providing certainty and stability for the country in the Brexit negotiations.”

Under intense questioning over a possible government deal with Sinn Fein, Mr Troy batted off suggestions Fianna Fáil were “power hungry” and desperate to lead the 33rd Dáil.

“Oh yeah, it was very rewarding the last four years for us. I wouldn’t call that as being desperate to stay in power.”

There was talk too of what he termed “insurmountable differences” with Sinn Féin and its threats to scrap the property tax, slash the Universal Social Charge and embark on a set of policies very much anathema to his own party’s fundamental principles.

It was that same guarded rhetoric which reared its head to questions over the likelihood of another general election later in the year.

“But why?” Mr Troy replied.

Whether it happens is anyone’s guess. All that matters for Mr Troy in the interim, is the prospect of a third successive Dáil term and the satisfying reality Fianna Fáil are once again the predominant power in Longford-Westmeath.