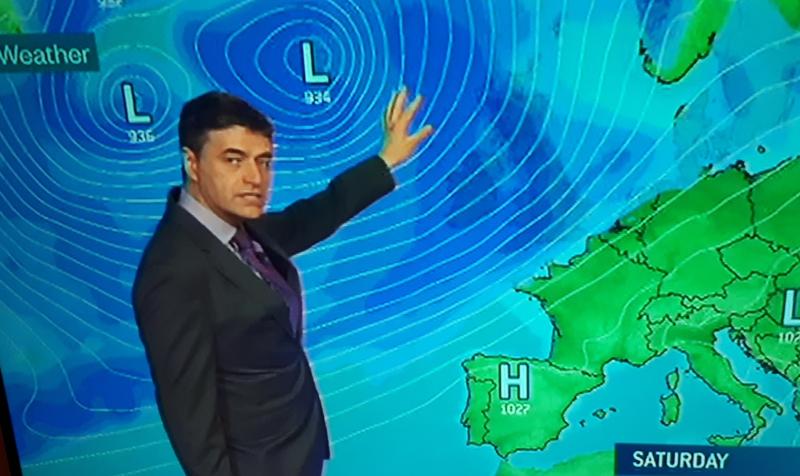 Met Éireann has extended a Status Yellow snow ice warning and has also put the country on alert that Storm Dennis is on the way.

The forecaster says Storm Dennis is set to impact this weekend as the unsettled weather that started with Storm Ciara is set to continue.

In his forecast after the RTÉ news on Tuesday, February 11, meteorologist Gerry Murphy gave an update on the cold weather and outlined when the Storm is set to hit.

He said the cold, very unstable westerly airflow swept in by Storm Ciara will continue to bring wintry showers through Tuesday night and in the early hours on Wednesday with snow still possible.

For this reason the forecaster updated and extended its Status Yellow snow ice warning which says that scattered wintry showers will continue to cause some disruption to travel is possible, particularly over higher routes. The warning is valid until 10am on Wednesday. More below tweet.

The current nationwide Status Yellow snow /ice warning has been extended to 8am tomorrow morning.
Please take care on the roads as wintry weather may lead to difficult travelling conditions.

He forecast an improving situation on Wednesday which would mark an end to the wintry conditions but added that more stormy weather is on the way.

"Tomorrow evening and night, the next system will bring wet blustery conditions across the country. Perhaps sleet for a time but mostly rain," he said.

Mr Murphy said the unsettled trend of weather would continue and Friday into the weekend when Storm Dennis is due to impact.

"This is a very deep depression which is set to push to the north. This is Storm Dennis which has been named by the UK Met Office and it is likely to bring windy and very wet conditions over the weekend," he said.

The UK forecasters says the impacts are not expected to be as extreme as Storm Ciara but it will bring widespread strong winds and heavy rain to parts.

It says the system will develop in the North Atlantic before tracking eastwards towards the UK and Ireland over the coming days, passing to the north of Scotland on Saturday. The UK forecasters have already issued warnings for the weather expected. MORE BELOW TWEET.

The impacts from #StormDennis, a low-pressure system are not expected to be as extreme as #StormCiara but will bring widespread strong winds and heavy rain to parts of the UK on Saturdayhttps://t.co/dt61qsRjfx

Watch our video to see when a storm is named pic.twitter.com/W7do4Hr8DL

National forecast issued at at 8.30pm on February 11.

Wednesday: Frosty and icy to begin on Wednesday. Dry and bright in many areas with spells of sunshine. However, some wintry showers will occur early on, becoming mainly confined to the northwest by late morning. Later in the day rain will move into the southwest. Another cold day with highest temperatures of only 4 to 8 degrees, in mostly moderate, occasionally fresh west to southwest breezes.

On Wednesday night, rain will extend northwards to all counties accompanied by strengthening southeasterly winds with some spot flooding. The rain will turn to snow across parts of Connacht and Ulster with accumulations for a time before the snow transitions to rain by Thursday morning. Minimum temperatures of 1 to 4 degrees.

Thursday: Showery outbreaks of rain across the country on Thursday with blustery west to northwest winds. Turning drier later in the day as temporary ridge of high pressure builds in from the Atlantic. Highest temperatures ranging from a rather chilly 4 or 5 degrees in Ulster to 9 or 10 degrees along the south coast. Dry for much of Thursday night with a risk of frost and lowest temperatures of 0 to 4 degrees, coldest in the north and east.

Friday: Southerly winds will strengthen on Friday and a band of rain will move quickly in across the western half of the country during the morning, extending eastwards to remaining counties in the afternoon. A clearance to bright spells and showers will follow from the west. Top temperatures of 9 to 12 degrees. Clear spells on Friday night but rain is expected to arrive along the Atlantic seaboard during the night and southerly winds will freshen. Lowest temperatures of 5 to 8 degrees.

Saturday: Early indications suggest Saturday will be a wet and windy day with heavy rain clearing to showers during the afternoon and evening. Top temperatures of 8 to 12 degrees in strong and gusty southwest winds. Turning colder overnight with scattered rain or hail showers and lows of 2 to 5 degrees.

Sunday: The latest guidance indicates that Sunday will be another wet and blustery day with showers or longer spells of rain.