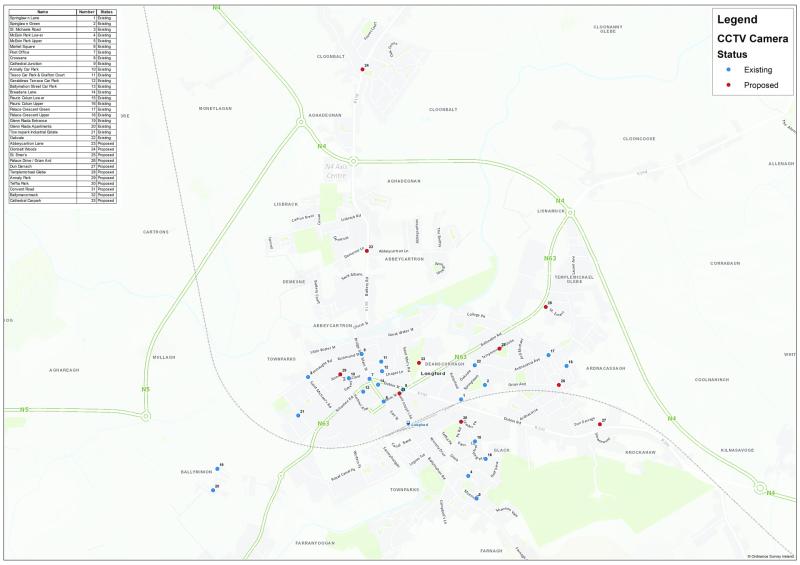 A map of the locations which will have new CCTV cameras

Longford Gardaí's battle against crime is set to receive a timely shot in the arm thanks to the installation of 12 new state of the art CCTV cameras throughout Longford town.

The proposed positioning of the new cameras are currently open to public consultation after local authority chiefs made them available for inspection at its civic headquarters on Monday.

“This is something we (Council) have been pursuing for a number of years,” he said, adding but for red tape the cameras may well have come on stream considerably sooner.

“All of the locations have been agreed with the Gardaí and at a meeting recently I did set the challenge of whether we could have them up by the end of the year.”

Cllr Butler said the cameras earmarked for residential estates would encompass a fixed positioning format with those aligned along the town’s main thoroughfares boasting a more mobile configuration.

The long serving Fianna Fáil local politician also hinted at how the new cameras would also provide a welcome tonic towards boosting public confidence and tackling a wider perception of crime.

“Firstly, there is the detection of crime aspect to it in that the cameras will be extremely beneficial in the investigation of crime.

“Secondly, it’s (cameras) a disincentive and preventative measure in stopping crime and thirdly there is a psychological component to it.

“And while they won’t solve everything overnight, it is still a significant move forward in helping to clean up the streets of Longford.”

A register of all existing 22 CCTV locations together with the 12 proposed new locations for cameras is currently available for inspection at the offices of Longford County Council, Aras an Chontae, on Great Water Street from Monday 6th January 2020 until Friday 31st January 2020 between the hours of 9.30am to 1.00 pm and 2.00 pm to 4.30pm, Monday to Friday inclusive.