2019 in Longford: When beef farmers fought back 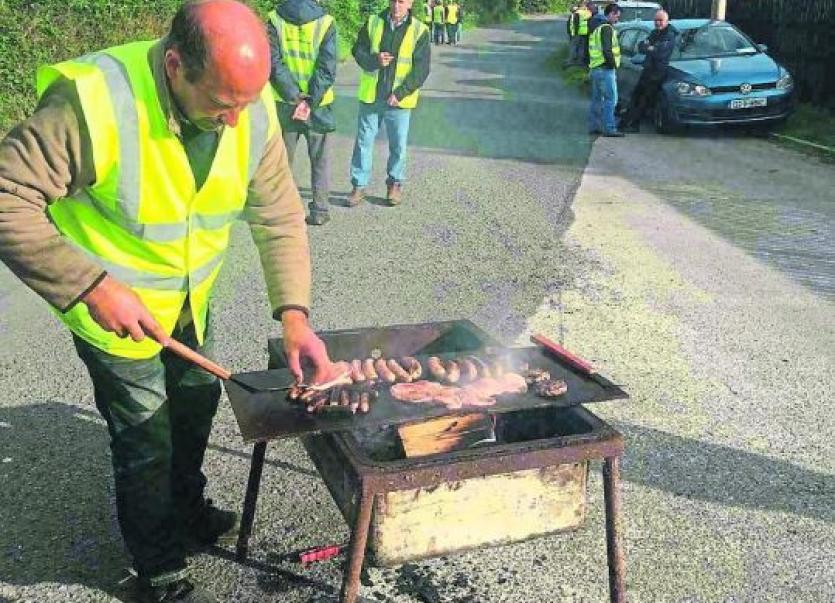 Chairman of Longford beef plan movement, Norman Mills, cooking up some nourishment at the picket line in Kilbeggan

2019 marked a very important year for Ireland’s beef farmers, as they sought to take back some of the market control from the country’s top meat processors.

Countrywide pickets, organised by the Beef Plan Movement (BPM), began back in early August, with farmers protesting outside sixteen meat processing facilities throughout the country.

Longford farmers showed their solidarity to the cause by joining the pickets outside Kepak Kilbeggan, Kepak Athleague and Liffey Meats Ballyjamesduff.

They then took pickets to Kepak Ballymahon and C&D Foods in Edgeworthstown, vowing to stay on as long as was necessary.

With protests lasting eight weeks in total, the main aim was to secure improved prices for the beef stock they produce. However, as blockades continued and efforts made to commence beef crisis talks, Meat Industry Ireland (MII) confirmed they would not enter into talks while ‘illegal blockades’ continued.

Injunctions were then sought and granted against leading members of the BPM, as well as two Longford farmers over their role in blockades at C&D Foods Edgeworthstown.

These legal threats eventually led to the countrywide cessation of protests at the end of September, with farmers vowing to return to pickets if demands were not met.

In the weeks following, attempts were made to commence beef market taskforce talks. However, representatives of MII claim they were blocked from entering talks by farmers voicing their concern of legal injunctions hanging over the heads of two farmers and leaders of BPM .

This led to the suspension of talks, before farmers again showcased their frustrations at a lack of progress being made and commenced another strand of protests. This time, they caused a major traffic disruption in Dublin city as a convoy of tractors made their way to Kildare Street in late November, demanding a meeting with Minister for Agriculture, Michael Creed, TD.

The main aim of the tractor protest was to highlight the falling incomes of the farming community, especially those in the beef and meat sector. The protest continued until Minister Creed agreed to speak to representatives of protestors.

With prices yet to increase significantly as of December 2019, farmers have already announced plans of further protests in early January. The team behind the tractor protest in Dublin have organised another demonstration, which is due to take place on January 15.

Will farmers finally receive a fair price for their produce in 2020? Or will 2020 spell the start of further demonstrations? Now, we wait and see.