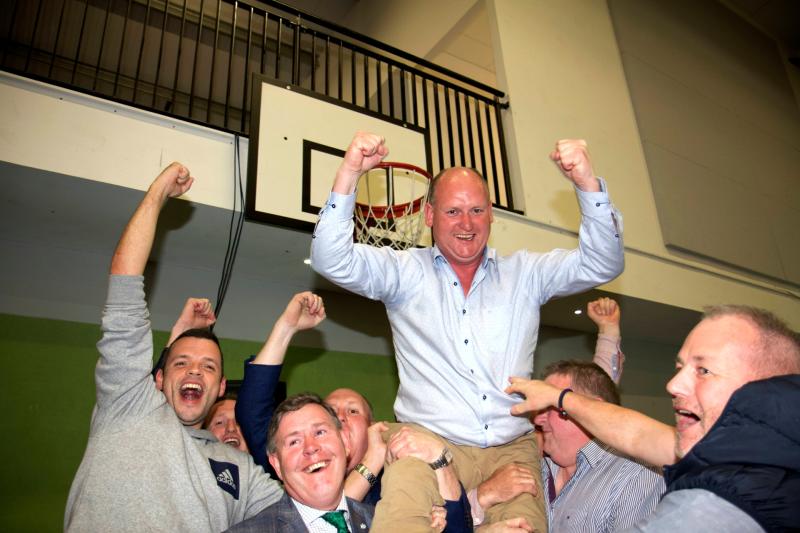 As local elections go, the 2019 version served up over four exhausting, but equally engrossing days in May will live long in the memory.

Longford is a democratic labyrinth that rarely goes about its business by halves.

In a strikingly ironic throwback to its gruelling 2016 ‘Siege of Kenagh’ general election equivalent, it was a democratic process which threw up as many surprises as a Paul Daniels magic show.

At the top of that political slogfest was a recount and the introduction of three new councillors, together with the return of Fine Gael to the top table of Longford County Council.

Aside from talk of which party may or may not hold the balance of power locally, the undoubted surprise of Election 2019 was the breathtaking performance of Turlough ‘Pott’ McGovern.

The Independent Granard based farmer had been widely talked about as being a possible fly in the electoral ointment to the county’s two largest parties, Fine Gael and Fianna Fáil.

Not even the most seasoned of political commentators could have foreseen what was to come, however, as the sports mad community activist not only claimed a seat but topped the Granard electoral area poll in the process.

It was an extraordinary performance and one the man himself struggled to quantify, describing the feat as “a quare thing” but one which did not come about by accident.

The collapse of the Fianna Fáil vote in what has perennially been viewed as a stronghold for the party was a political curveball few, if any, could have foreseen.

Yet, there the signs of an electoral backlash were patently obvious. The loss of vote getting heavyweights Luie McEntire and Martin Mulleady would have taken its toll on any political party.

And despite the credible efforts of first time candidates Joe Murphy, Amanda Duffy and Victor Connell, the trio ultimately came up short.

To be in with a shout for any seat at local authority level, the least a candidate should be pinning their representative hat on is the acquiring of 500 first preference votes.

The fact not one of the aforementioned hopefuls broke the 400 vote barrier sent alarm bells ringing inside Edgeworthstown’s St Mary’s Community Centre from an early juncture.

For those sitting among the benches of their fiercest and most ardent of rivals, Fine Gael, the opposite was very much the case.

Having secured a marginal victory (37 per cent to 35 per cent) over Fianna Fáil in Ballymahon and a 3.5 per cent (37.8 per cent to 34.3 per cent) in Longford, it was the size of its triumph in north Longford (46.4 per cent to 24.3 per cent) which ultimately strengthened its hand at the negotiating table with its Independent counterparts.

Sinn Féin, like five years previously when Mullinalaghta's John Reilly polled extremely well, were once again left to mull over what might have been as both Tena Keown (Longford) and Mark Maguire (Granard) saw their hopes of securing a seat end in disappointment.

In Longford, one of the most eye-opening surprises was the decision of voters to stay away with just 55 per cent of its electorate choosing to exercise their democratic mandate.

Fianna Fáil’s Joe Flaherty led from the front, securing election on the first count and in so doing underlining his candidacy as the party’s general election forerunner. He was joined by outgoing councillor Seamus Butler as well as first time candidate Martin Monaghan.

The addition of the Longford town butcher to the county council ranks might have raised a few eyebrows in some circles, for those within Fianna Fáil and to those closest to the affable Newtownforbes man, it was a feat which illustrated Monaghan’s all round likeability and dexterity in striking a chord with the wider public.

One of the more predictable of results was of how long serving Fine Gael Cllr Peggy Nolan comfortably held onto her seat.

A veteran of the political game locally, not even the most impassioned of anti-government naysayers could have begrudged the irrepressible health advocate from enjoying another five year stint in the county council chamber.

Whatever about those exploits, the performance of her party colleague Gerry Hagan in claiming a seat after switching from the Granard Municipal District, was undeniably one of the election’s stand-out achievements.

It was made all the more eye-opening given the fact the GAA central council delegate was not even able to vote for himself in a district which had by far the highest number of candidates (16) vying for seven seats.

That success, allied to the solid vote getting exploits of John Browne ensured the main government party, led locally by Director of Elections Sean Farrell, did just that.

It was an achievement which also brought the curtain down on Independent Cllr Mae Sexton's long and distinguished career at local authority level.

A polished and well respected politician, Cllr Sexton was always playing catch up when first tallies showed her being over 100 first preferences behind Fianna Fáil’s Martin Monaghan.

It was also a departure which ensured the Council was left with the solitary female voice of Cllr Nolan on its new look make-up.

The only remaining district which didn’t throw up much by way of surprises was that of Ballymahon.

Unlike its other two local electoral areas, it was very much a case of as you were with all six outgoing councillors looking set to be safely returned.

As had been widely anticipated, Legan based Councillor Paul Ross saw off all-comers, topping the poll with a huge 1,217 first preference haul.

Independent Cllr Mark Casey was not far behind on 995 as he too crossed the finish line on the first count.

A recount, called by Independent candidate Tony Moran after he was eliminated on the sixth count failed to alter the course of what was a predictable, but gruelling course as Fianna Fáil’s Mick Cahill and Pat O'Toole comfortably held on alongside outgoing Fine Gael councillors Colm Murray and Gerard Farrell.

In the midst of those results, all eyes inevitably turned to who, and, which party would hold sway within the confines of the county council chamber between now and 2024.

Fianna Fáil officials had been keeping their fingers crossed that a relatively respectable seat return would enable the party to extend its agreement with the local authority's three Independent representatives for another five years at least.

However, as the age old adage goes and as one senior party source put it at the time: “Politics is a numbers game.”

Murmurings over a pre-election deal already having been signed off on and reported by the Leader before a seat had been won or lost certainly caused some controversy.

Among those to speak out was long serving and unsuccessful candidate Frank Kilbride who announced his resignation from the party, vowing to “never stand for Fine Gael again”.

And while Mr Kilbride also declared his intention to run as an Independent general election candidate going forward, Fine Gael strategists pressed ahead with shaking hands on a deal with ‘Pott’ McGovern, leaving messrs Warnock and Casey very much in political no man’s land.

“The people have spoken,” said Cllr Warnock as the reality of the situation befalling both himself and his Lanesboro based sidekick dawned.

“Nearly 80 per cent voted either for Fine Gael or Fianna Fáil.

“It's up to us, as councillors, to form the strongest council possible and to work for the betterment of all the people of this county.”

And whoever or whatever party holds political sway over the next five years, that’s all Longford's 40,000 or so citizens, no doubt will be hoping takes precedence between now and when the county’s electorate is asked to do it all over again in 2024.