Foster & Allen looking forward to a memorable return to Abbeyshrule 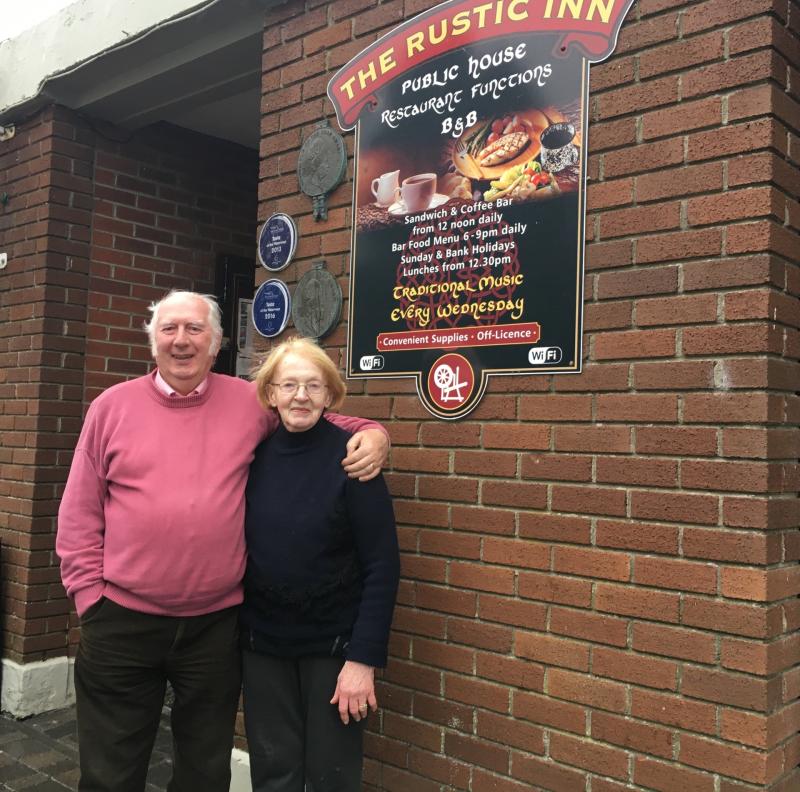 To celebrate 45 years involvement in the music industry, Mick Foster and Tony Allen - otherwise known as Foster & Allen - are back on the road and returning to Longford for a special gig.

Although it has been a long time since the Rustic Inn welcomed the country’s most famed musical duo through their doors for a performance, they were once a fixture back in the 1970’s.

The duo will return to the Rustic Inn in Abbeyshrule for a special performance this coming Monday, December 30.

Mick Foster told the Leader, “We started playing here in the Old Rustic Inn, the wrong side of forty years ago.

“Back then it was a great venue. You wouldn’t get to play in the Rustic Inn if you were an ordinary Joe soap,” he smiled.

“We haven’t played here for years and we saw last year there was some group playing here. So we said this year, seeing as it is only over the road, we would give it a shot and see what happens.

“We have come full circle. We are back to very close to where it all started. We are looking forward now to December 30. We hope we see a few familiar faces.”

While speaking to the Leader, Mick reminisced of the ‘good old days’, when the gig scene was thriving in both rural and urban Ireland, and Foster & Allen were regulars in Abbeyshrule.

“I remember it well,” said Mick, “We used to be here once a month, then we weren’t here for years after the fire. After they rebuilt, we were back again.”

Betty McGoey added, “They used to be here nearly every Saturday night.

Mick continued, “We are looking forward to getting back on the 30th and having a good night.”

For those unaware of the steeped musical history behind Foster & Allen, they first began playing music together in the mid 1970s, playing together with a small group in the UK. This was the result of a passion for music gained from family members.

After a couple of years working the Irish music venue scene in the UK, their fellow band members made the journey back to Ireland, however, Mick and Tony stayed on and Foster & Allen was born.

The hits soon followed and the duo soon released their first single - The Rambles of Spring - and in 1978, they released their first top-selling single, A Bunch of Thyme, which subsequently hit number one in the Irish charts and stayed in the charts for a monumental 40 consecutive weeks.

It took until 1982 for the track to be released for UK markets and its popularity was due in part to a fellow Irish man.

Mick explained, “Val Joyce and people like that would have played it on a regular basis and then Gloria Honeyford and Terry Wogan in England.

“Whatever Terry Wogan played, all of the other BBC programmes followed suit.

Continuing, he said, “The next year Maggie got into the Top 30 and it went to number one in Australia and New Zealand and that opened up more markets.”

Although now perhaps one of their most famous tunes, A Bunch of Thyme, was actually not intended for release as a single.

Mick remarked, “That was only supposed to be an LP track.

“Liam Herlihy was producing it and ‘ABunch of Thyme’ was only an album track. He advised us to go with it as a single.”
Mick says the pair never anticipated it would become quite as popular as it did.

“It went number one in Ireland, forty years ago this month,” Mick said.

Such was the popularity of the Irish duo, they soon became a household name in many countries throughout the world, even appearing on Top of the Pops in the now famous leprechaun suits.

“It was just another television programme,” Mick said of their Top of the Pops appearance.

So popular was their music, that even some of today’s biggest stars were autograph hunters back in the day.

Mick’s wife Moyra Fraser, who is also the band’s keyboard player, said, “One time Westlife were over looking to take photographs and get autographs.”

Mick laughed, “I hadn’t a clue who they were, sure I had never even seen Top of the Pops until I was on it.”

Although now international superstars, having charted in and toured all over Ireland, Australia, New Zealand, the UK, parts of Canada and the US, all Tony and Mick ever wanted was to earn a reasonable living by making music.

“The plan was to be able to earn a living from playing music, without having to work as well,” Mick said.

“We weren’t looking for big international hits or tours or anything like that.

“We have now done twenty tours in Australia, fifteen in New Zealand and seven or eight in South Africa. We have done a bit in America, but not a whole lot, and the east side of Canada.”

Ahead of their musical return to Longford, Mick gave an insight into what people can expect.

He said, “We will be doing all of the old hits and we will also be doing a cross section of stuff from the last forty five years.

“We will start spot on at 8pm and we will be gone by half ten. Doors are open from 7pm.

“We hope to see you all there.”

In terms of the future of Foster & Allen, they will remain as busy as ever over the coming months and have just released Timeless Memories, which features 182 of their best tracks and is available for purchase online at www.fosterandallen.ie, at www.cmrrecords.ie or in any music store.

They will also continue touring and you will no doubt see Mick and Tony pop up on your television screens in 2020, taking part in RTÉ’s High Road, Low Road among other projects.They will also be performing a song written by Mick’s wife and cousin (Bridget Walsh) for the return of the Fleadh to Mullingar. The song is suitably named ‘The Mullingar Fleadh’.

Mick said, “We are touring Ireland after Christmas. Then we are going to England on March 19 and then Canada, May 16.

“Then, the All-Ireland Fleadh Cheoil is coming back to Mullingar. It hasn’t been for 57 years and Comhaltas ceolteoirí na hÉireann was formed in Mullingar.

“Moyra and a cousin of mine wrote a song for Tony and myself, to do with the Mullingar Fleadh. That is going to be released after Christmas and there is a DVD done with it as well.”

If you’re looking for a great night, make sure you catch the boys in Abbeyshrule this coming December 30.