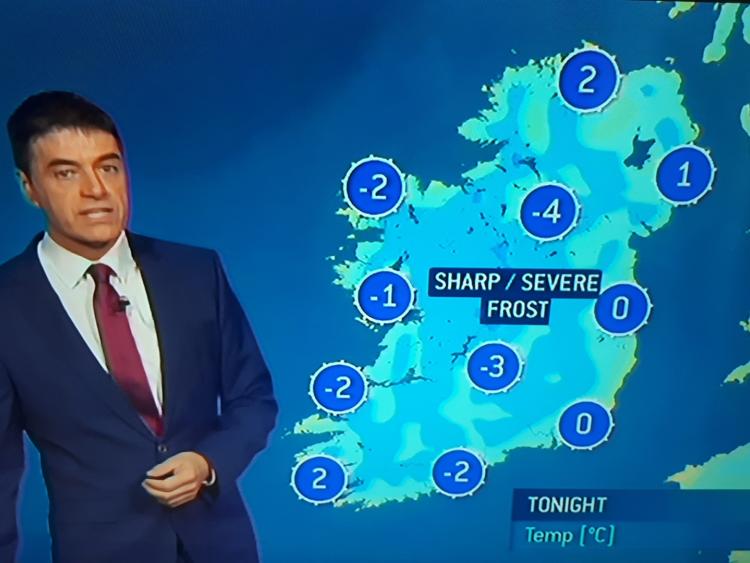 Met Éireann forecaster Gerry Murphy delivers weather warning and forecast for the rest of the week.

Met Éireann has issued a weather warning for low temperatures which will bring severe frost overnight on Sunday.

Also read: 'Never heard of him': Ballymahon's Maura Higgins hits back after Louis Walsh calls her a 'minor celebrity'

Met Éireann says it will be very cold on Sunday night into Monday morning. The forecster expects minimum air temperatures to  range -2 to -4 degrees Celsius. Widespread severe frost with the risk of icy patches.

In forecast issued just after midday on Sunday Met Éireann said it would be dry and very cold tonight with clear skies and light winds. It said there would be a widespread sharp to severe frost with minimum temperatures of zero to minus 4 degrees generally, though less cold near east coasts. Apart from the risk of icy patches, it said there would be some shallow fog patches inland.

Met Éireann expects Monday to be a dry sunny day but much wetter weather looks set to dominate for the rest of the week. The unsettled weather will bring milder air.

In the weekly farming forecast issued on Sunday on RTÉ Met Éireann meteorologist Gerry Murphy said the ground is already saturated and the week ahead would bring more rain from Tuesday on. The south and east of Ireland is set to see the highest amounts of rain. More below picture. 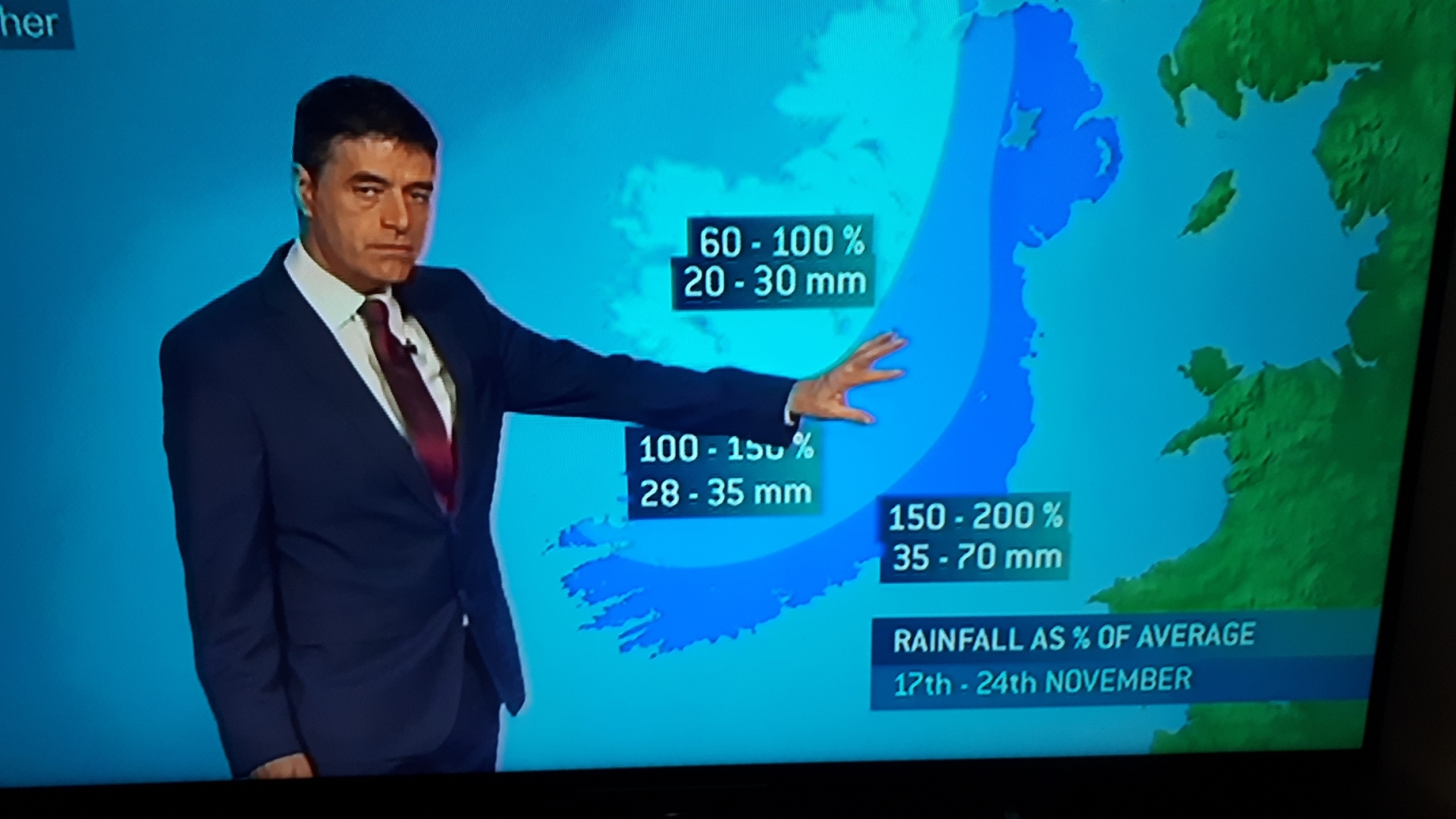 National outlook by Met Éireann on November 17 at 12:23pm: Becoming milder but staying unsettled with rain or showers on most days. More below tweet.

A nationwide forecast and outlook covering the next week can be found here. https://t.co/9gKN6SVok4 pic.twitter.com/13mMHIQMsC

MONDAY, NOVEMBER 18
Tomorrow Monday will be a bright and dry day with good sunny spells. After a very cold start, frost will clear and temperatures will recover to range 6 to 9 degrees by afternoon. Light variable winds, becoming southerly later on west coasts.

Monday night: Rain reaching the southwest early in the night and very slowly making its way eastwards becoming patchy in nature as it does so. It will however hold dry for much of Leinster and Ulster until morning. Minimum temperatures ranging 2 to 5°C in the south and west, but down to zero to minus 2 degrees in the north and east, coldest over Ulster, with frost forming under some breaks in the cloud. Winds fresh southeasterly.

Tuesday: Patchy rain and drizzle over much of the country to begin, however this will clear to the north and east during the day. A clearance with sunny spells and just isolated showers will follow for Connacht and Munster. Highs of 7 to 10°C in fresh south to southeast breezes.
Any remaining patchy rain will clear the northeast coast early Tuesday night, however another area of showery rain will push onto the south coast later in the night.
Lowest temperatures over Leinster and Ulster of zero to plus 2 degrees, a little less cold further south and west with minimums of 2 to 4°C.

Wednesday: A mix of heavy showers and some bright spells on Wednesday. The showers will be quite widespread and may merge into longer spells of rain in places, particularly in the south and east. Max temperatures of 7 to 10°C in fresh southeasterly winds. Continuing showery on Wednesday night but not as cold as previous nights with temperatures not falling below 3 or 4°C.

Thursday/Friday: The unsettled conditions continue for the end of the week with low pressure close to or over Ireland. There will be some sunny spells but many areas will see frequent showers. Winds will continue fresh southeasterly with daytime temperatures around average for this time of year, 7 to 10°C.