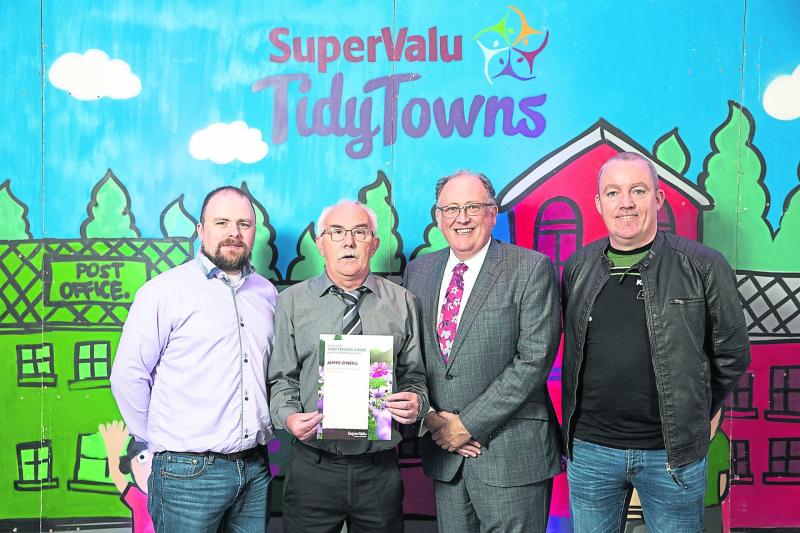 James O’Neill of Cloontuskert TidyTowns Committee, Co Roscommon, has been highly commended as a SuperValu Community Hero at the national final of the SuperValu TidyTowns Awards at the Helix, DCU.

James, who was nominated by local retailer Bernard Keane of SuperValu Lanesboro, was recognised at the awards ceremony for his commitment to making his local community a better place to work and live in.

The SuperValu Community Heroes award was set up to honour TidyTowns volunteers who make a notable effort to build and develop a thriving community in their area.

At the awards ceremony, James received a commendation for their commitment to building thriving communities through their work on their local SuperValu TidyTowns committee.

Commenting on the awards, Martin Kelleher, Managing Director, SuperValu, said, “This is the 28th year that SuperValu has sponsored TidyTowns and 2019 saw a record 918 committees participating in the competition. SuperValu TidyTowns is the greatest community-focused, sustainable initiative in Ireland, and it's all made possible by the thousands of passionate volunteers like James who work tirelessly to make villages and towns across the country better places to work and live in.

“They are the true heroes of the SuperValu TidyTowns competition and I would like to congratulate all of the Community Heroes on their tremendous achievement.”

There was a capacity crowd at the Helix with TidyTowns committees from across the country in attendance to receive their awards.
Full details of every one this year’s winners are available at www.tidytowns.ie or alternatively at www.supervalu.ie.