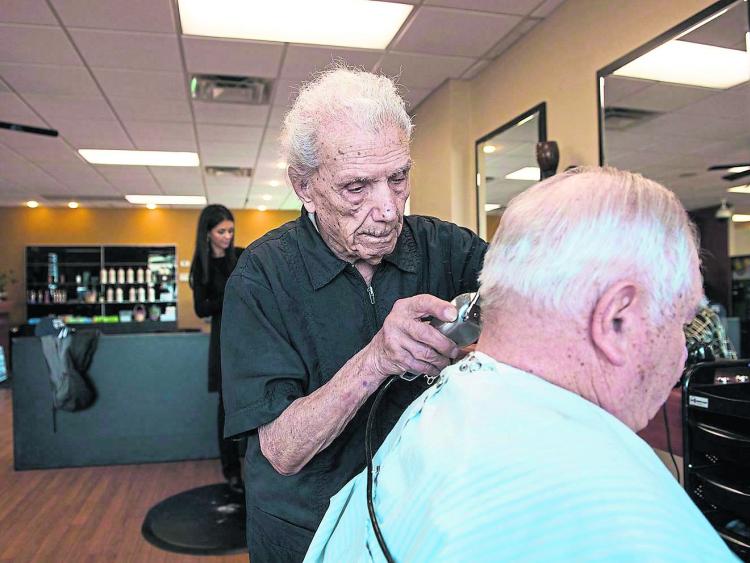 In my working life, I travelled to the USA for many years, often maybe twelve occasions a year, mostly to New York.

Being in New York so frequently, meant that I became familiar with many areas, and learned of some people too.

One man I visited - out of curiosity I must confess - was a barber who was in the Guinness Book of Records as the oldest working barber in the world.

He worked in New Windsor, a small town on the Hudson River.

His name was Anthony Mancinelli.

At the time, 27 years ago, he showed not a single sign of old age, apart from his slightly greying hair, and a few wrinkles here and there. His face looked fresh and he was extremely alert. He walked with purpose and the appearance of supreme confidence.

We talked while he cut my hair, and he eventually happened to tell me his origin was Italian, from a place that I’d forgotten, but the New York Times informed me it was Montemilone.

He died on September 19, and I wouldn’t have known that either except for the New York Times.

It was good to get the obituary, although to this day I remember several of the details of his life. He was an incredible man.

Having begun cutting hair in 1922, he stayed at that profession for 97 years, apart from a brief suspension during the Second World War. Otherwise he kept cutting through the Depression, the Vietnam War, the civil rights struggle, the Cold War, the Sixties revolution, and Watergate.

He kept cutting through the various styles that came and went from decade to decade from the age of Buster Browns, Mohawks, Elvis-style pompadours. In fact he kept cutting until shortly before his death, by which stage he had held the title of the world’s oldest barber for a dozen years.

His wife, one for whom he held enormous tenderness, died in 2004, and that was why he never retired. “If she was here we probably would retire, because you can go places and enjoy yourself” was a quote he told to one of the many journalists who drove up to see and interview him in New Windsor.

“Where am I going all alone? So I says ‘forget it. I’ll stay in the barber business.’ At least I see people here, I talk to people, they talk to me, so on and so forth. It keeps you going.”

He was born in 1911. He was one of eight children. Anthony Mancinelli retained an Italian accent all his life.

The family emigrated to the US when he was eight, landing in New York after a ten-day voyage, which he recounted - also to the same journalist - “Rough ride all the way in. The boat was going up and down all the time. We spent most of the time in a hole somewhere,” was his recall.

In his time as a barber he saw the world literally change forever.

So many technological breakthroughs and so many customs cast aside never to return.

For thirteen consecutive years he was Grand Marshal of the New Windsor Memorial Day parade, and a week before his death he was inducted into the National Barber Museum’s Hall of Fame in Ohio.