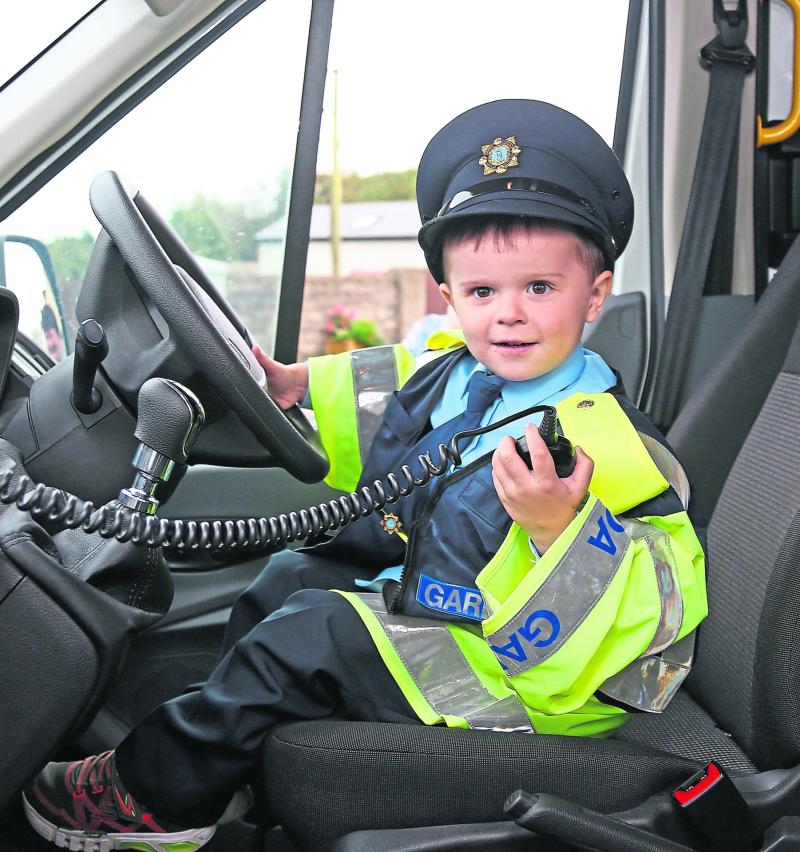 It was a red-letter day for brave three-year-old Darragh Hopkins last Wednesday as the Killoe youngster was unveiled as a Garda Little Blue Hero, writes Liam Cosgrove.

Darragh, who has successfully battled cancer on two occasions already, was given the red carpet treatment at Granard Garda Station in testament to his courage and resolution in the face of adversity.

Little Blue Heroes Foundation is a not-for-profit charity operated entirely by volunteers and is made up of Garda members/staff, retired Garda members, their families, friends and civic minded people from various communities.

It aims to help families in need from local communities in Ireland who have children undergoing long-term medical treatment for serious illness.

In keeping with that mantra, gardaí from the Granard District played host to Darragh and some of his brother's school friends as they were given an in-depth behind the scenes look into the everyday running of a busy garda station.

“He (Darragh) only got the all clear for the second time recently which was why he was chosen,” said community garda Tracey Shanley, who told of how the event's guest of honour soon got to grips with the occasion.

“He was a bit quiet at first but when he found the sirens in the patrol car he really started to enjoy himself,” said the well respected garda.

Besides the fun loving toddler's clear excitement at being the centre of attention, the day was an emotional and innately proud one for his parents, Catherine and Paul as well as his older brothers Aaron (12) and Cathal (9).

“He had a blast,” remarked Paul.

“He took a little while to get into it but once he got into the van and put on the sirens he had a really good time.

“Anything that makes noise, he is a big fan of.”

Paul spoke of the arduous and times punishing journey his youngest son has been forced to undergo at such a tender age.

“He's on a long journey at the minute. This Friday will be two years since his initial diagnosis. We have been through a tough two years but Darragh is strong and is a real trooper. He also loves it at Child'S Play creche in Killoe.

Given the way the football, trucks and tractor addict savoured his moment in the spotlight in Granard, Paul said there would be little surprise in the Hopkins household should his son opt to swap his Power Ranger costume for the blue of the Gardaí.

“I could have,” he said when asked if he had a garda on his hands.