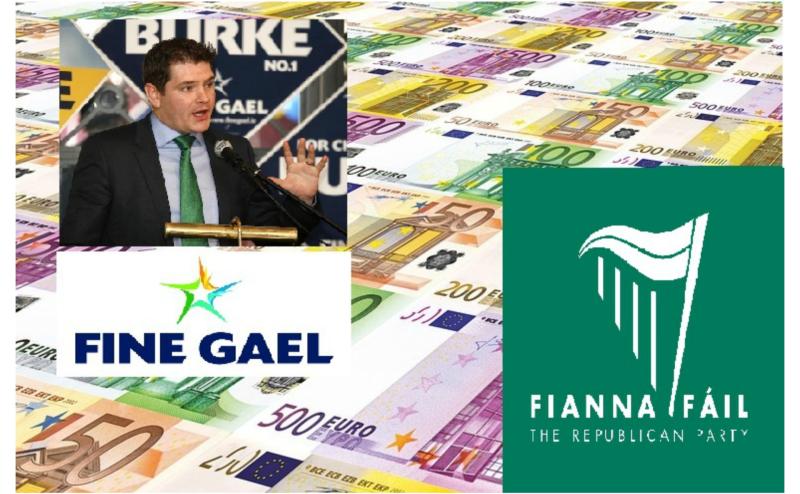 The Mullingar based chartered accountant suggested that FF's ongoing reckless spending demands of taxpayers’ funds is solid proof Micheál Martin’s party has not learnt a single lesson from the devastation they caused this country.

He says Fianna Fáil, who is propping up Fine Gael in government through the confidence and supply arrangement, are trying to present themselves as having learnt from the immense heartache and hardship they caused nationwide when 'they put the party before the Irish people and economy'.

Deputy Burke commented, “Fianna Fáil say if it wasn't for Brexit there would be an election, and Micheál Martin says he wants to be in Government. So people deserve to know how Fianna Fáil would treat taxpayers money if they had the chance.”

Not for the first time, he has compiled a report for Fine Gael into spending demands from FF and put a price tag on them.

“In the first six months of this year, Fianna Fáil have recklessly called for €4.35bn in spending before the Budget, with no consideration as to how to pay for it. What is even more worrying, is this is a conservative figure as costings cannot be provided for all of their spending calls," explained Deputy Burke.

He continued, “Fianna Fáil don’t even know collectively what they want – it is unrealistic and unfair on the taxpayer. The only way to meet Micheál Martin’s party’s demands would be to increase taxes or borrow.

“Responsibility comes with being in office and an examination of Fianna Fáil’s weekly spending calls shows they are not half as responsible as they claim. As a Government, Fine Gael deals with the daily reality of managing Brexit, as well as keeping our day to day finances in order, and planning for the future.

“Fianna Fáil try to be all things to all people, no matter the cost. Their attitude of ‘when we have it, we spend it’ or indeed ‘when we don’t have it, we’ll spend it anyway’ hasn’t gone away. Loose and extravagant spending claims continue unchecked. It is a ridiculous approach and informs us that prudent economic management and Fianna Fáil are complete polar opposites.

“Individually, some measures are fine and well-meaning and are being implemented by Fine Gael in Government. However, the real problem should Fianna Fáil get their hands on the country’s tiller, is there is no coherent strategy from Micheál Martin when it comes to economic management. ‘Call for whatever ye like lads’ is the message from the top down – no matter what choppy waters may be ahead.

“While all are worthy recipients for investment, Fianna Fáil have not produced a shred of information as to how this investment would be funded. This does not paint a picture of a party who understands how to govern.

“Last year, we saw Fianna Fáil make spending demands of €3.5bn. Their spendthrift mindset has not only continued, it has accelerated in 2019.

“Can Fianna Fáil representatives tell us what areas of public expenditure should be reduced to finance this lavish spend? Or maybe they’d introduce another USC to plug the black hole like they did in 2010?

“The public and Fine Gael have worked hard to get our finances balanced. For the first time in 10 years, we are taking in as much as we spend."

Deputy Burke concluded, “Which is more important for Fianna Fáil –protecting the country during an extremely dangerous Brexit period or power no matter the reckless cost or impact on the country? Going by their continuous demands, it seems power trumps all else – attained no matter what the price to the country or her people."