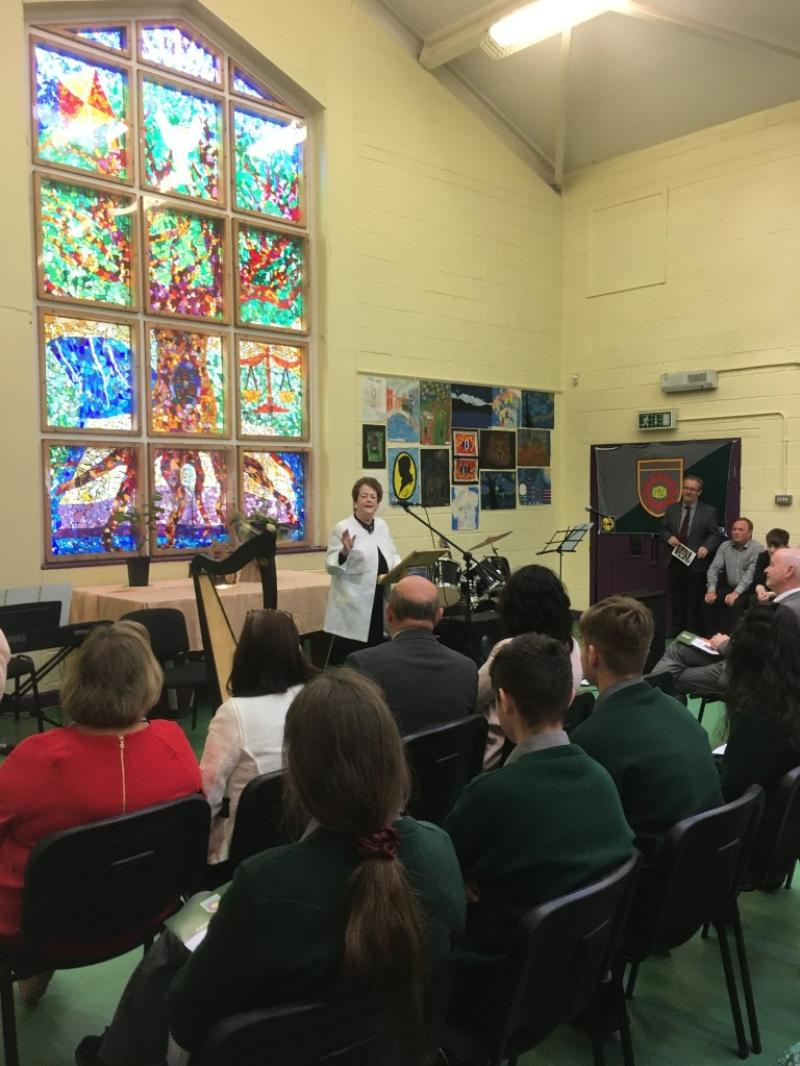 Former TD and Minister for Education, Mary O’Rourke, was the special guest at Lanesboro Community college earlier today, September 05, for the official opening of the new science building - Arás na hEolaíocht - on the school grounds.

Following a harp recital which commenced proceedings, principal of Lanesboro Community college, Bernice Martin, welcomed everyone in attendance and thanked all who were involved in the project from start to finish.

She told the Leader: "A huge amount of work has gone on behind the scenes and today has been a wonderful day, a day of celebration of what our school is all about - a tight-knit community spirit.

“It is a wonderful day for the school and for the students involved in the opening of the building.

Continuing she said: "It is great to have this modern facility in place now to back up all of the work that has been done by teachers in the past in the areas of science and STEM subjects.

"The students now have all the equipment that they need to hand. In comparison to the science lab that we had, it is a wonderful facility for the students."

Ms Martin says the new building has come at the right time, with a greater emphasis now on STEM subjects than there was in the past.

"There is a huge emphasis now on STEM subjects. Facilities like this ensure that both boys and girls to engage in the STEM subjects.” Bernice told the Leader.

"Many careers down the line will be tied to STEM subjects and this facility will hopefully encourage students to take part in these subjects."

Deputy principal of Lanesboro Community college, Michael Lyons, then introduced student representatives who performed some Irish dancing and offered blessings, while there were also performances from a school band and a student pianist.

This was all followed by an address from none other than former TD, Ms Mary O’Rourke, who welcomed all elected representatives in attendance and praised the renewed focus on STEM subjects in education nowadays.

“They are the way forward, there is no doubt about it.” the former TD said of STEM subjects.

“In our day we didn’t pay too much attention to STEM subjects, but they are a very necessary requisite for today and tomorrows world.”

Offering some final words of encouragement she said: “To the young people, in particular, the world is before you,”

Following Mary’s address, Longford Dr Christy Duffy of Longford Westmeath ETB was invited to the stage and he described the occasion as a ‘great day’ for everyone involved in the school.

He said: “Today is a great day to be a student or have an involvement in Lanesboro community college, it is just wonderful.

“Here in Lanesboro that is what you have in spades, great people at the heart of the school.”

Before the official plaque unveiling, Willie Dennigan, Chair of the Board of Management, thanked everyone involved in the project and lauded Longford Westmeath ETB for their unanimous support from the get-go.

“When I brought this project to the board, I got unanimous support,” he said.

Once the plaque was officially unveiled and the building opened, students treated attendees to a tour of the new building, while also performing some scientific experiments and showcasing their latest woodwork and engineering projects.

Pick up your copy of the Leader next week for full comprehensive coverage of the opening.

Also read: Runners and kayakers make their way from Dublin to Clondra in Royal Canal 144km