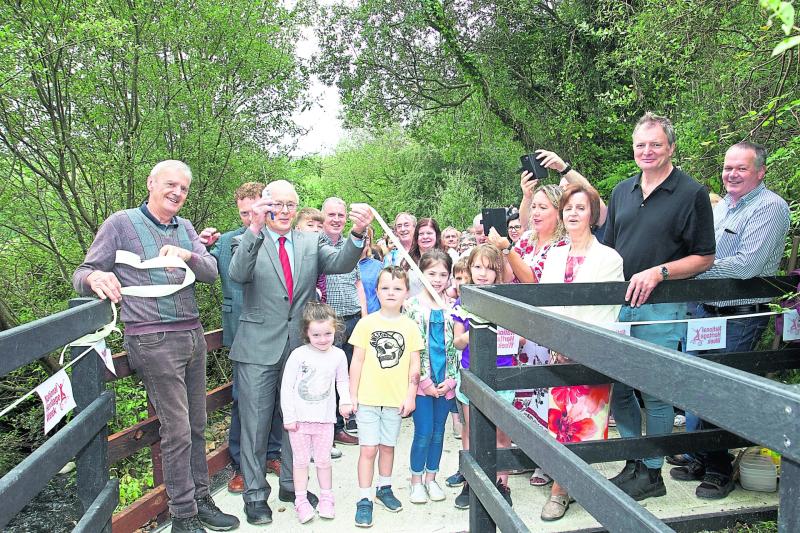 Local politcians join committee members and locals at the opening of a community waterfall in Colmcille.

North Longford is well accustomed for its serene natural beauty and now thanks to the inviting addition of a new community waterfall those credentials look set for a further timely shot in the arm.

Thanks to the unstinting efforts of a small band of volunteers aligned to Colmcille Area Development Group the fruits of those endeavours were laid bare recently for locals and members of the public to see.

“I suppose it has been 18 months or so in the making,” said local Cllr Garry Murtagh, who revealed around €30,000 in funding had been set aside by Longford County Council under the Outdoor Recreational Infrastructure Scheme.

The presence of a mill dating back to the 1800s provided a key historical backdrop to the planned venture and following talks with local authority officials, moves were made to enhance the feature's all round appeal to locals and visitors alike.

“We had a meeting with Donall Mac An Bheatha (senior planner) and Frank Horne and it was decided that putting in decking would make a great job of it,” added Cllr Murtagh.

The former Colmcille footballer was also keen to heap praise on all those who helped play their part in bringing the project to its final stages.

Among those singled out included the staff of Longford County Council, Longford Community Resources CLG, contractors, volunteers as well as the generosity of both the Mulligan families, Brian and Mary and Gearoid and Alison.

And since its grand opening, already the waterfall has enticed newlyweds to have their post nuptial photographs taken there as attention now turns towards enhancing the development further still.
“That's the plan,” explained the Fine Gael local representative.

“It's hoped that we will , in time, extend the trail into the village because it's a lovely place to come down, to reflect and just take it all in.”

That's for another day, however. For now though, locals from this quaint parish set in the heart of north Longford are quite rightly basking in the allure what is sure to become one of its most spectacular and eye- catching of features.