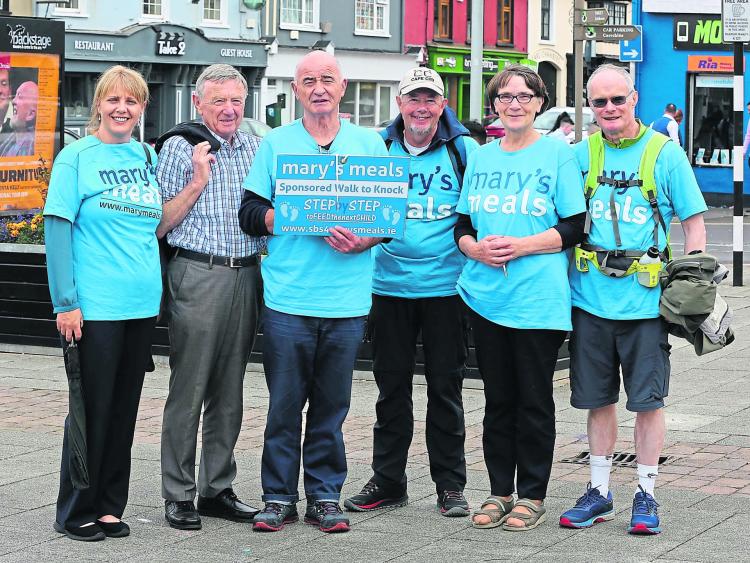 Liz, who is walking the length of Ireland, approximately 650 kilometres, starting from Malin Head, going all the way to Mizen Head, is due to arrive in Longford this Friday, September 6 and the following morning, she will continue her journey south, walking to Athlone.

Canadian Liz, along with Chris Howell, are undertaking the walk to raise funds for global school feeding charity Mary's Meals to provide meals in Habitat Primary School in Mzuzu, Malawi.

A Mary’s Meals fundraising walk passed through Edgeworthstown and Longford town on the weekend of August 11 last with a large local contingent participating.

A new Longford branch of Mary’s Meals was also launched this year and if you wish to join, contact 086 040 5621 for more information or log on to www.marysmeals.ie

Liz is used to lengthy endurance challenges. In 2018 she swam the distance from Alcatraz Island to the San Francisco shoreline to raise funds for the school in Malawi.

She began her walk on Friday and will pass through Derry, Strabane, Omagh, Enniskillen, Ballinamore and Mohill before arriving in Longford town.

Liz aims to walk at least 10 hours a day and she hopes to complete the 650 kilometres by Sunday week, September 15.

As part of her preparations, Liz spent weekends walking around 30 to 50 kilometres to gain stamina.
"It's not going to be a leisurely stroll," said Liz.

She added, “The epic trek from Malin to Mizen will take almost 1 million steps! However, my challenges are minor compared to the kids at Habitat Primary.”

Mary’s Meals provides life change meals to impoverished children in some of the poorest communities in the world.

It announced in August that it is now feeding an amazing 1,504,471 children every day in 2,358 schools in 18 countries around the globe.

Thanks to the incredible generosity of supporters from Ireland and worldwide, the number of hungry children receiving Mary’s Meals daily at school has risen by more than 5% (an additional 79,458 children) since January 2019.

Mary’s Meals works in partnership with thousands of local volunteers to provide the meals. The promise of a nutritious meal encourages children – who may otherwise be forced to work, beg or scavenge for food – to come to school and gain an education that can provide an escape route from poverty.

The scale of expansion is inspiring. Mary’s Meals began by feeding just 200 children in Malawi in 2002.

Today, the figure for that country alone has reached 1,028,817. Even more remarkable is the fact that the average cost to feed a child with Mary’s Meals for a whole school year is just €15.60.

To donate to Liz’s appeal go to: www.marysmeals.ca