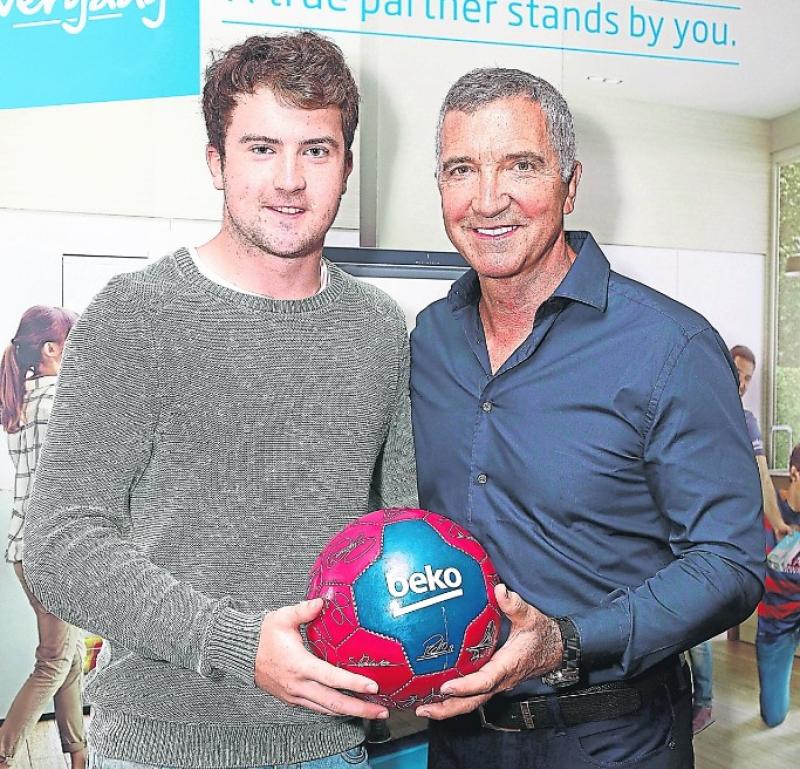 The late Ciaran O’Boyle pictured in July 2016 with former Liverpool legend Graeme Souness whom he met at a pre-match reception ahead of FC Barcelona versus Celtic Picture Conor McCabe Photography.

Longford has been plunged into mourning following the sudden death of local young man, Ciarán O’Boyle.

The 22-year-old from Aughadegnan, Longford town, died after a tragic accident in New York.

Ciarán was found unconscious outside a building on Gates Avenue in Brooklyn by New York Police Department officers responding to a 911 call last Thursday.

He was taken to Woodhull Hospital nearby, where he was later pronounced dead.

The UCD student, who is also a past pupil of St Mel's College, hails from a highly respected and well known family and deepest sympathy is extended to his parents Paddy and Jacinta, sister Rachel, brothers Kevin and Patrick, grandmother Deirdre, relatives and many friends.

Ciarán will lie in repose at Glennon’s Funeral Home, Ballinalee Road this Thursday, August 29 from 4pm, concluding with prayers at 8pm.

Mass of the Resurrection takes place on Friday, August 30 at St Mel’s Cathedral, with interment afterwards in Ballymacormack Cemetery.

Following news of Ciarán's passing, tributes have poured in from throughout Longford with people expressing their deep shock.

A former student of St Mel’s college, Ciarán was a skilled computer programmer and software engineer and he was in the process of studying computer science at UCD. The Longford man  spent the summer in Canada and had travelled down to New York when the fatal accident occurred.

Since news of Ciarán’s sudden passing, many have paid tribute to the Clonguish man, as well as expressing their deep sadness at the news.

One such tribute came from Ciarán’s local GAA club, Clonguish, who  described the news as a ‘huge shock’.

A club statement read: “The club would like to extend its deepest and heartfelt sympathies to the O’Boyle family on the tragic and untimely loss of Ciarán.

“To his mum and dad, Paddy and Jacinta and to his brothers Kevin and Patrick and sister Rachel and to all his extended family and friends.

“Both Kevin and Patrick are club players, involved with our seniors and minors and Ciaran was also a former club player.

“Our thoughts and prayers are with the O’Boyle family at this very difficult time. Ar dheis Dé go raibh a anam dílis.”

These sentiments were echoed by Declan Rowley, Ciarán’s principal while he was in St Mel’s College, who told the Leader of the deep shock among Ciarán’s former teachers upon hearing the news.

He said: “The news came through to us on Friday morning and we were all in a staff meeting at the time, so the staff heard the news all at the same time.

“There was great shock in the staff room, because of the family and Ciarán as well. Ciarán finished his Leaving Certificate here about four years ago.

“His two brothers Kevin and Patrick also completed their Leaving Cert at St Mel’s. His younger brother Patrick finished this year and got his Leaving Cert results only two weeks ago in the school.

“His mother Jacinta was a member of our parents’ association and his father Paddy would be very well-known to us as well in the school.”

Ciarán was described as a lovely, clever lad and one that will be deeply missed by all who knew him.

“He was a very smart lad,” Declan Rowley told the Leader.

“Our hearts go out to the O’Boyle family. It is difficult to even understand what they are going through.

“It is very tough. We know there were a lot of St Mel’s students who were still around for Ciarán and our heart goes out to them as well, because they are going through a very tough time.”

Longford County Council Cathaoirleach, Cllr Micheál Carrigy, said  news of the tragedy had  yet to sink in.

“My sympathies go out to the family at this sad time,” he added.

Cllr PJ Reilly described the news as a real tragedy.

He stated: “For a young man to lose their life in an accident like this is so, so tragic.

“My sympathies go out to the family at this time."

Longford GAA in New York also extended their sympathy to the O'Boyle family.

“The club would like to send their deepest sympathies and condolences to the family of Ciaran O’Boyle from Clonguish, following his sudden and tragic death here in NY. May he rest in peace.”

“I continued meeting Ciaran occasionally after we both finished our Leaving Cert and we both kept in close contact with one another until recently.

“As one of his best friends, I am totally devastated to learn of his death and I will miss him so much. Our thoughts and prayers are with Ciaran's family at this extremely sad time.”