Bricking it: Aughnacliffe man nervous and excited for world contest 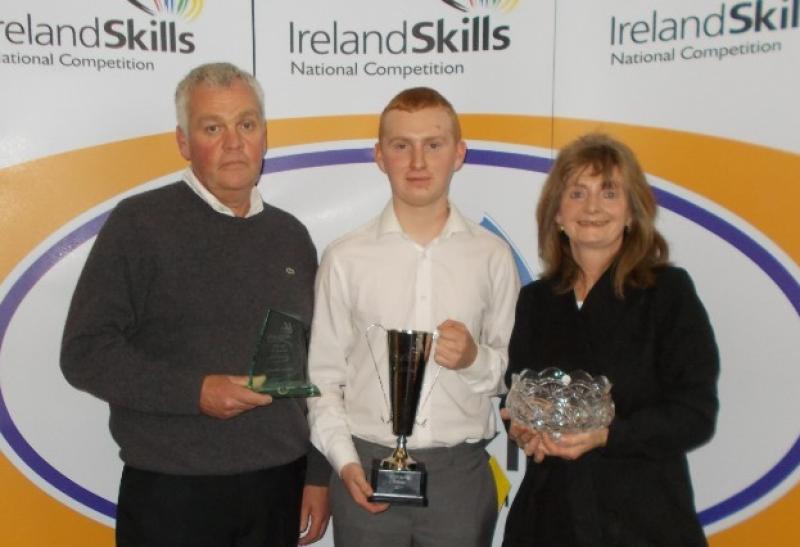 Ryan McLoughlin with his late father, Kevin McLoughlin, and his mother, Peggy McLoughlin. They are pictured after Ryan won the Irish Skills Competition in 2016

It's an exciting week for 22-year-old Aughnacliffe man Ryan McLoughlin as he jets off to Kazan, Russia to compete in the Bricklaying category of World Skills 2019.

The son of Peggy and the late Kevin McLoughlin, Ryan competed in the national competition earlier this year and has been going through a twelve-week training programme to prepare.

“My dad was a bricklayer and I started doing the apprenticeship with him and I’m nearly finished it,” Ryan told the Leader last week.

“I did my training in Waterford. I did 20 weeks down there through a general apprenticeship and got picked out for the national competition. So we went to the national in Dublin and I won that competition.

“The World Skills was in Abu Dhabi in 2017 but they weren’t sending a bricklayer to it so I wasn’t eligible for that competition but they said I still stand a chance for this one if I keep working hard at it.”

And in March, the time came for Ryan to compete again in a national competition. The talented bricklayer won the competition and was selected to travel to Kazan with a team of other young people with various skills.

“I enjoy bricklaying. The general everyday stuff can get boring after a while, but I love doing the real technical stuff that you’d be doing in the competitions and one-off stuff that you can stand back and say it looks really cool or looks really well,” he said.

“It’s like art. I did the coat of arms for Abu Dhabi and different stuff like that. Stuff like that I enjoy doing because you have to use your head a bit. It’s not just straight walls. That stuff I like.”

Ryan's late father, Kevin, was a bricklayer from the age of 13 when he started working with his own father.

Ryan started working with him at the age of 17, just after he left school.

“I thought about going to college for a while but I never liked school. I hated sitting in a classroom and always liked being outside so I said I’d take a year out and go working,” he explained.

“And when I was working then I said I’d go and do an apprenticeship. I didn’t want to go back and sit in a classroom.

Unfortunately, Ryan suffered the sudden loss of his father on July 11 of this year and admitted that things are “a bit tough-going”.

“He was in bad health and he wasn’t able to fly out (to Russia), so he was disappointed that he couldn’t go,” Ryan explained.

When Kevin was Ryan's age, there weren't international bricklaying competitions to enter in. In fact, Kevin had never even heard of World Skills until the opportunity arose for Ryan.

“There are 54 different skills at it from beauty therapy to visual merchandising - every sort of skill going, not just general apprenticeships,” said Ryan.

“There are loads of different skills and you never hear about it until someone is in it, but when you actually see the size of it, it’s massive.

“There are 17 of us on the team. We all know each other fairly well by now. We’ve met up a couple of times since the start of it. There are 16 different skills - there’s one that has two lads; it’s a computer based thing.”

The competition itself starts this Friday, August 23, and finishes on Tuesday, August 27. Ryan and the rest of the team flew to Russia on Monday.

“I think on the last day we’ll get a day to ourselves to look around, but when we’re out there, there’s one day that the Irish team is going to a school out there and showing the Irish culture to some of the school and they’re going to show us the Russian culture,” he said.

“I’m nervous in a way. I’m excited to get going and get stuck in and get through it. But I’m nervous too, hoping I don’t mess things up.

One thing he's certain of, though, is the number of opportunities for work that will open up to him when he comes back.

Ryan doesn't have any concrete plans for when he comes back and is instead waiting to see what happens.

“I’ll probably go back to work and see what opportunities can come of it. I’ll work for a while and maybe go into teaching it and maybe look for a position in one of the colleges that teaches the apprenticeships.

“I don’t know really but this will bring a lot of opportunities. Going by anything already, work is already starting to pick up for me. I never really got any phone calls and now I’m nearly turning off the phone,” he laughed.