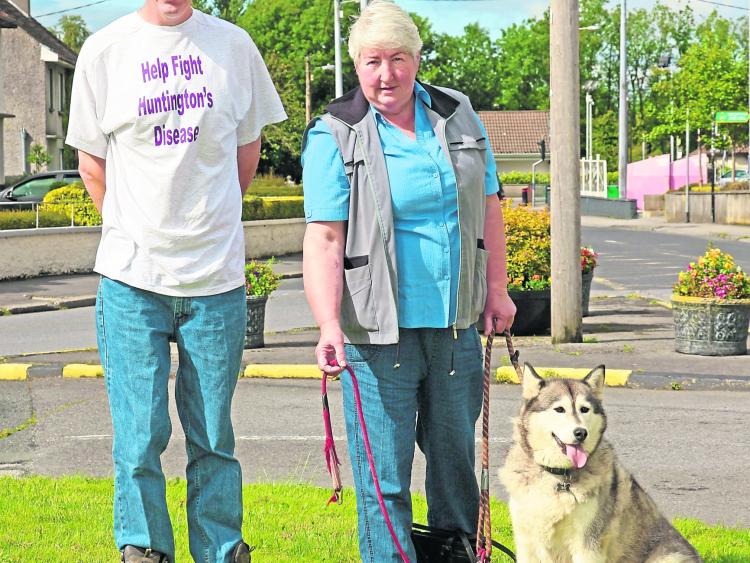 Joe and his mother Pauline

A Longford mother has been forced to reissue previous calls to the State, requesting that her son receives a place in a full-time residential care facility.

Joe Doran (50s), who hails from near Longford town, was first diagnosed with Huntington’s disease fourteen years ago and is cared for full-time by his mother Pauline.

The disease, which results in eventual brain cell death and affects motor movement control, coordination, cognition, personality and emotions, was one inherited from his late father.

The symptoms associated with the illness also result in further psychological and emotional distress for sufferers, including anxiety, psychosis, personality changes, obsessive compulsive disorder and depression.

Joe’s mother Pauline (70's) told the Leader that she is extremely worried for the Joe’s future should something ever happen to her.

“I am the only carer he has,” Pauline explained.

“He gets a personal assistant for two hours per day so he can go out walking and he is also down in the centre during the day.

“But I am everything to Joe. I am his chauffeur, his organiser, his cook, his potwasher, everything.

Of her main worry being what would happen to Joe should something happen to her, Pauline said: “That is my biggest worry. That is why I am pushing for the last four years to get him into the appropriate centre, where he will be looked after as a young man.

“He is not an elderly person that would be quite content, as I would be, to sit and watch TV and just go out the odd day. He is still quite active. Although he is losing a bit everyday, he still has a life to live.

“He has a great attitude. Life is for living, that’s his motto and he would like to be given that opportunity,” Pauline said.

Because of these worries and to try and put pressure on those with power, Pauline started a petition - which you can sign at chng.it/PbvBG6Xt or alternatively in outlets such as the Longford Leader - to try and get Joe a place in residential care in the Bloomfield facility in Rathfarnham, Dublin. The petition has so far gained over 5,000 signatures all in all.

She told the Leader: “I have so far gathered over 3,000 signatures.

“Then there is around another 2,500 more online, meaning we are pushing for 5,000 altogether.”

“I can’t thank the Longford people enough. They have been so supportive, with their time, generosity, donations, and watching out for Joe.”

Pauline told the Leader that she has Minister ‘Boxer’ Moran on the case, with an important meeting this week to decide the fate of Joe and others alike.

She said: “There is a meeting coming up between the mental health and disability departments, to see if they can come to some sort of agreement. There is some sort of business plan.

“Kevin ‘Boxer’ Moran is working on it for me and he got a letter from one of the ministers, saying a business plan was put forward. It is kind of non-committal really, but we live in hope.

“I am going to try and send an email to them every fortnight or so, just to remind them that we are still here, still hoping and so they won’t forget about us,” Pauline continued.

Pauline says having a place for Joe in Bloomfield would not only give her the peace of mind she desperately longs for, but also an opportunity for Joe to live out his days in the best possible way and with the highest quality of life possible.

She noted: “He won’t get back what he has lost, but it will stimulate him.

“There will be people in there that are his own age.

Pauline then called on those with the power to grant Joe this much-needed place, to look at the situation as if it involved a child of their own.

She said “Look at your own family and imagine watching your children in reverse, bringing them to adulthood and watching them disintegrate over time.

“Would they not want the best for their children?”

“That’s all I want. I want Joe safe and secure. Then if my time comes, I can kick the bucket with an easy mind, knowing that he is going to be taken care of.

Pauline also wished to use this opportunity to offer her condolences to her brother-in-law, his daughters and the McHugh family, on the loss of their family member, Mary. She says the family have been a huge help to both her and Joe.

“To Josie, Bernie, Susan and Chris, our heartfelt sympathies go out to you at this time, at the loss of their wife, mum and granny, Mary, who was a kind and gentle woman and will be greatly missed.”