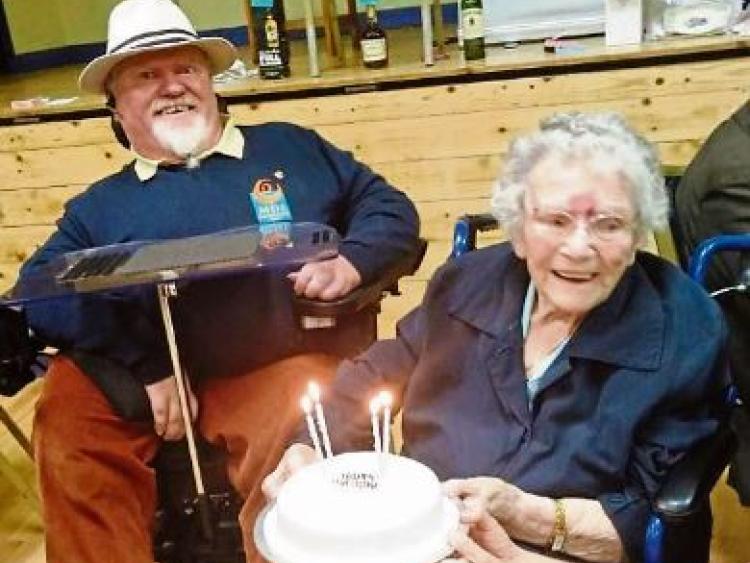 Anne, pictured with her nephew Hubert McCormack (originally from Legan) who works for MDI in Dublin and who presented her with a birthday cake on the night

Ardagh native Anne Byrne, who recently celebrated her 104th birthday was the guest of honour at a charity Whist Drive in Granard Community Centre on Tuesday, July 16.

The event, which raised funds for Muscular Dystrophy Ireland (MDI) drew in crowds and organisers would like to extend their sincere gratitude and thanks to everyone who attended, supported and/or made donations to MDI.

Anne has personal family connections with MDI because her nephew Hubert McCormack lives with muscular dystrophy.

Hubert is employed as an Office Administrator with MDI and is originally from Legan, Co Longford.
Back in 2016, to mark her 100th Birthday, Anne requested that a Whist Drive would be held with all proceeds going to MDI.

This event has now become an annual event and four years on it continues to attract card players from the Longford/Cavan area and beyond, with the most recent Whist Drive taking place in Granard Community Centre on Tuesday July 16, raising a further €835 for MDI and bringing the total raised to date to over €3,000.

All proceeds from this event will go towards the upkeep and further development of MDI’s Home from Home Apartment, which provides fully accessible wheelchair accommodation to people with disabilities and their families who require accommodation while in Dublin to attend clinics or hospital appointments, or who simply just require a short respite break. For more details visit: www.mdi.ie.

Organisers praised those who got involved and were quick to express their gratitude: “On behalf of MDI, we would like to thank Anne and all the organisers and supporters of the Granard Whist Drive for their continued and ongoing support of the work of Muscular Dystrophy Ireland.

“A special word of thanks to: Martin Clynes (for once again securing Granard Community Centre for this year’s event), to all the volunteers who helped to get the hall ready and for providing fabulous refreshments on the night (tea, coffee, cakes, etc), to Mary Cahill for making the lovely birthday cake for Anne and to Gerard Leavy for his ongoing support.”