Opening of Center Parcs is a 'game changer' for Longford 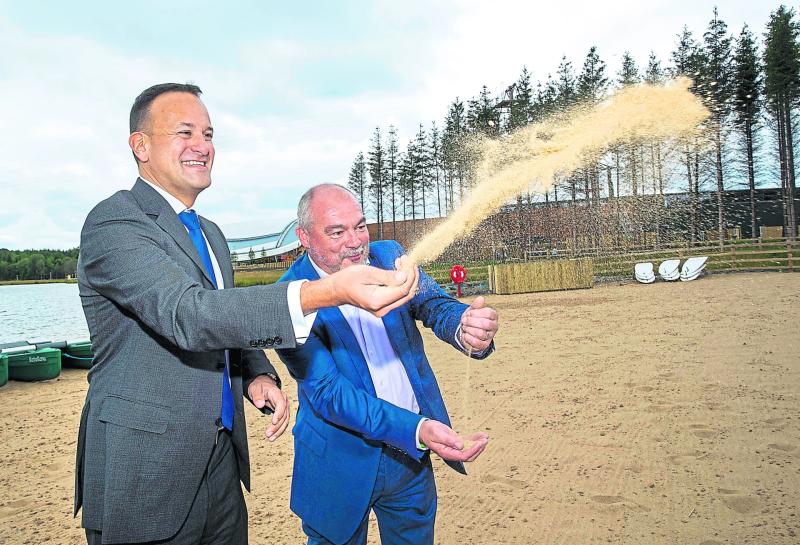 It may have been four years in the making and taken €233m to bring to fruition but the onset of Center Parcs’ Longford Forest holiday village looks set to revolutionise the county’s tourism potential for decades to come.

‘Game changing’, ‘unprecedented’ and a ‘massive, massive news story’ were just some of the umpteen superlatives used by several political dignitaries and public figures last Friday as the UK leisure giant set the seal on its official arrival into the Irish tourism sector.

“This huge tourism development has the potential to be a game changer for the midlands,” said Taoiseach Leo Varadkar.

“It will bring unprecedented numbers of tourists to this beautiful part of the country and the €233 million investment which has been made by the company in Longford is almost certainly the largest in the county’s history.”

“The creation of 1,000 new jobs will have a positive impact across the region and indeed it was a pleasure to meet some of the new employees here today.

“The Irish tourism industry has grown steadily in recent years and this addition to our tourism offering will ensure visitors get to experience a part of the country they may otherwise have missed.”

Mr Varadkar was in jovial mood, a mindset which was a no doubt welcome distraction from less than 24 hours beforehand.

The Fine Gael leader came in for much criticism over remarks made to Fianna Fáíl counterpart Micheal Martin in the Dail where he compared the Cork TD to priests sinning behind altars.

He couldn't but offer up a wry grin when he was asked for his take on Ballymahon's other leading luminary in the shape of Love Island's Maura Higgins.

The Irish model has been the runaway star of the hit ITV show, which has now become a phenomenon amongst millennials, andMr Varadkar admitted he was somewhat enamoured by her success.

‘I have to say, I really like her,” he told reporters, qualifying those remarks by insisting he only watched “snippets” of the reality show.

Away from the injest remarks of Love Island villa, there was much to eulogise about when guests were told of the huge strides Center Parcs had made in turning its Longford Forest 'dream' into an eye-opening reality.

The 395 acre site opens its doors to the public in two weeks time in a move that has already generated 1,000 full time jobs and an expected €32m annual cash injection to the Irish economy.

“It is going to put Longford and the midlands on the map,” added Mr Varadkar.

Dubbed as the ‘Butlins for the middle classes’, the sheer scale and attention to detail which has gone into creating Center Parcs’ first foray outside of the UK leisure industry was a sight to behold.

The Leader got a sneak peak inside one of the resort’s stylishly constructed executive lodges equipped with plush interior fittings, flat screen tv, three spacious bedrooms and a fully equipped kitchen complete with modern appliances.

Add in the luxurious trappings of a manmade beach, zip-lining and close to 100 indoor as well as outdoor activities to compliment the resort’s centreprice- a state of the art Subtropical Swimming Paradise-it certainly caused plenty of stir among the 100 or so invited guests at its official launch.

The occasion was not lost on Ballymahon Municipal District Cathaoirleach Cllr Pat O'Toole.

A seasoned Fianna Faíl political campaigner, he like many in his peer group has seen and experienced most things in his time in localpolitics.

But even he struggled to sum up the enormity of it all.

"It’s hard to describe it’s that significant,” he said.

"It’s a massive, massive story not just for the region and Ballymahon but ultimately for the country," he said.

"We are rightly positioned now to see a big upsurge in tourism.

"I think it is, we definitely need more bed nights and I am hoping we will see that develop over the next number of months."

“It’s another world,” said one interested observer to the Leader during our walkabout with messrs Varadkar, Moran and company.

That world looks set to take on a whole new meaning when Center Parcs opens its doors to its first paying visitors on Monday, July 29.