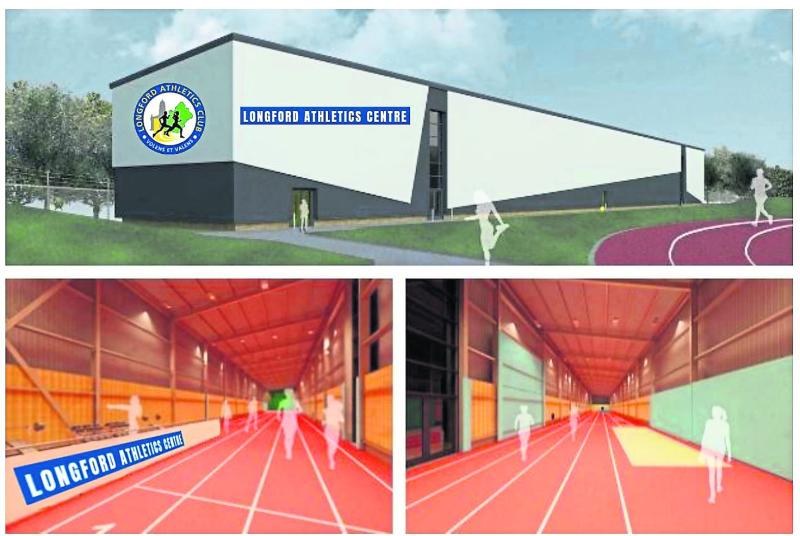 The proposed design for the Indoor Athletics centre

Local authority chiefs are coming facing intense calls to pave the way for an indoor athletics facility after the shocking dearth in elite training resources available in the county was laid bare.

Chairman of Longford Athletics Club, Paddy McPhillips and father to junior 1500 metre record holder, Cian, said the need for purpose built home for the county's most seasoned athletes was needed more than ever before.

“There are a lot of variations as to what a track can actually look like,” said Paddy.

“Our (Longford AC) preference would be for an indoor warehouse type facility where our runners, sprinters, hurdlers, high jumpers, long jumpers and shot putters would be able to train all year round.”

The incumbent vice principal of Moyne Community School made his remarks after it was revealed that despite Longford boasting the current Irish record holder, Nelvin Appiah, there is not a single high jump mat in the county to train on. To add make matters worse, Longford has no long jump pit anywhere within its borders for budding athletes to hone their skills.

“A high jump mat costs anywhere between €3,500 and €4,500 depending on its quality but there is nowhere to store it, so an indoor facility would solve that and allow our other athletes to train,” he said.

Paddy told of the “positive” response the club had received in terms of securing possible Leader funding with hopes high up to €250,000 in matched monies could be realised. The club are presently undertaking a major fundraising drive in a bid to achieve that aim (more details on Facebook and Longford AC website) but, Paddy said the key lay in the hands of local authority bosses.

“The fundraising is important, of course, but if the Council could give us two acres that would be hugely beneficial.

“We want to keep it (new facility) in Longford town, but wherever it is that's what we need.”