Longford lads at the core of Dublin’s metal scene 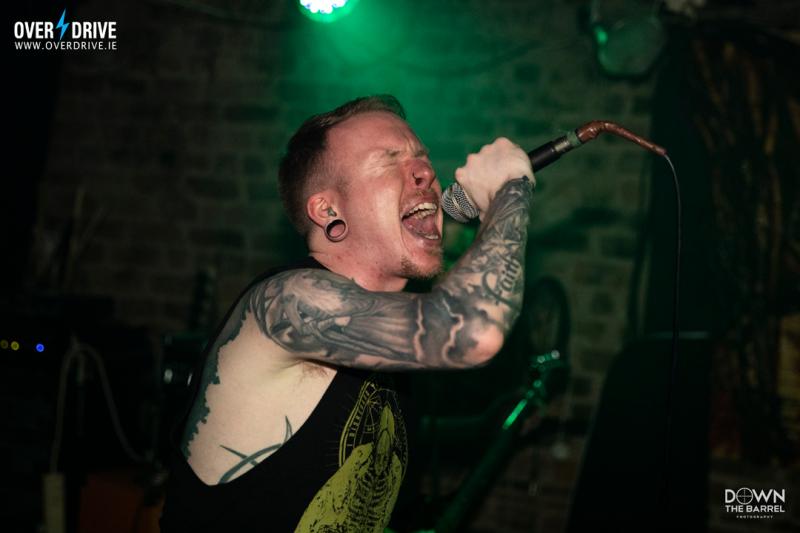 #JoinTheSect: Longford's Tony Carberry who is the singer of Aesect

One thing Longford is not short of is musical talent. Trad, pop, funk, rock - you name it, the county's got it covered and there's something to suit every music taste.

That goes for heavy metal too, with Longford duo, Tony Carberry and Aidan O'Halloran, taking the metal scene by storm as part of popular Dublin-based band, Aesect.

Growing up in Longford town, the pair met in Burke's Pre-School, then went to school in St Emer's before attending to St Mel's College.

They were in a band together from the age of 17 to about 22 and more recently became integral members of Aesect.

“I’ve been a music fan as long as I can remember,” guitarist, Aidan told the Longford Leader.

“I used to watch Top 30 Hits religiously as a kid. Then in my teens I was drawn more towards rock and metal music. I begged my parents to buy me a guitar and I’ve been playing ever since.”

Aesect vocalist, Tony, has a similar story of loving music and playing guitar. He told the Leader he was surrounded by various styles of music growing up and was exposed to everything from pop to dance and reggae to hard rock and metal.

“I was born in the late 80s and pretty much grew up in the 90s when all sorts of music was coming out and dying off,” he explained.

“My parents had me when they were quite young so that really helped as they were always into checking out new styles of music.

“My folks split when I was about four and I had one main father figure in my life called Gerry up until my early teenage years, who really influenced me and gave me my first guitar.

“That guitar got me into my first band, which landed me into the world of singing as a frontman and the rest is history, as they say.”

There's always been a Longford connection to Aesect. Shane Kiernan was the band's original frontman and his position was filled by Tony when he moved on.

“A little known fact was that I referred Shane to the lads as a singer,” said Tony.

“Shane had always admired our old band in Longford and credited me as the reason why he started singing in a metal band in the first place so it’s very apt that I ended up joining the band all these years later.”

Formed in the summer of 2011, it has been the band's aim to make an impression right from the beginning.

After regular gigging, the band garnered a name for itself amongst the live metal scene in Dublin, and began gigging regularly elsewhere.

In 2013, the band released its first EP, titled Buried In The Undergrowth. This five-track EP was made available for free download as soon as it came out. It was well received, and features staple tracks in AeSect's live set lists.

After some line-up changes, the band returned to form in 2015, releasing a six-track EP, entitled Devour The Earth.

“We only play our own music. That was something we all agreed on from the start,” Aidan explained.

His bandmate Tony agreed, saying that this was the main attraction of joining Aesect when he did.

“Their back catalogue of songs was amazing to me and their live performances were unparalleled,” he said.

“I knew when I auditioned for the band again last year that I needed to be their singer and I have added my own unique element to what is already a fantastic line-up and we have really upped the ante on our live shows now.”

This is a genre that's not for everybody and no metal band member would disagree with that. In fact, it's part of the appeal of the genre. If you're into metal, though, this is a band that really commands attention from the very first roar or guitar riff.

Each song really showcases the talent of the musicians in the band.

Aesect have just released a single called Blind Faith, which is available everywhere online. They've also recently secured a slot in the popular Bloodstock Open Air Festival in Derbyshire, UK, on August 11, which is no mean feat.

“Apart from playing Bloodstock in August, we are currently in the studio recording right now and looking to release a lot of new material in the coming year,” Tony explained.

And, while they have no gigs planned for the county, Tony can't deny that Longford's music scene has really improved over the years.

“The Longford music scene is booming with tons of local talent. Although myself and Aidan are based in Dublin now we do see a lot good things coming out of our hometown,” he enthused.

“What we’d like to see more of, however, is heavier music getting showcased a bit more and less pop and rock bands simply because there’s tons of bands in alternative scenes back home doing big things abroad and getting none of the limelight.”

To keep up to date with one of Dublin's top metal band's, follow @Aesect on Facebook or Instagram, or search their hashtag #jointhesect for the latest Aesect-related posts.

Read next: ‘Searching for Magpies’ as Ballymahon's KTG prepares to release new album