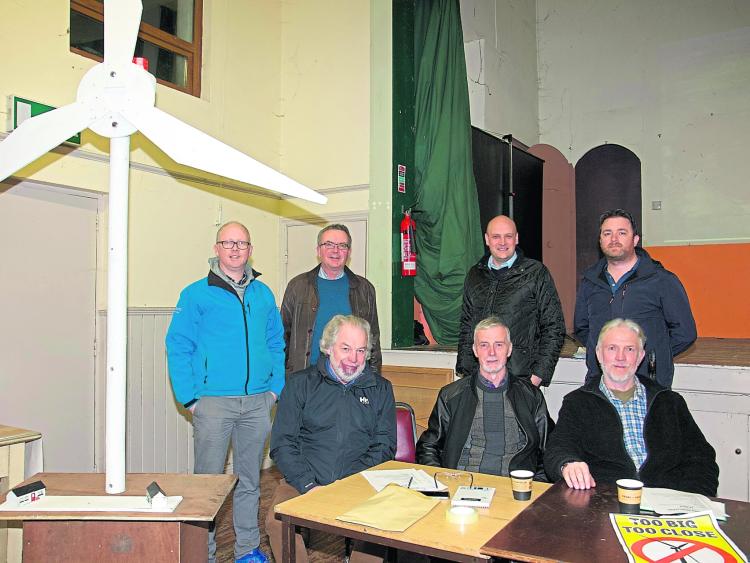 Day two of the An Bord Pleanála oral hearing into the proposed 24-wind turbine development in Longford took place at the Longford Arms Hotel, June 13, with submissions made from opposition to the development.

First to conclude a submission made yesterday was environmental consultant, Jack O’Sullivan, who spoke in depth on the alternative and more beneficial uses of peatlands, rather than the development in question. Mr O’ Sullivan spoke of the importance of peatlands as carbon sinks in their natural wet state and he also said the current management of the peatlands is not sustainable.

He then pointed to the benefits of the proposed Mid-Shannon Wilderness park, while also proposing the development of a museum to store and preserve peat extraction machines, which he says will soon become a part of local history.

In conclusion, Mr O’ Sullivan cited the comparison made from Bord na Móna (BnM) representatives to the wind turbine heights and St Mel’s cathedral spire and said, “Large scale wind power is not the way to meet renewable energy targets”.

The second submission was made on behalf of local man John Kiernan. John requested a declaration of financial donations from Bord na Mona in relation to payments made to various organisations in connection to the project. He also called for statutory inspection to be made mandatory for projects such as the proposed wind farm.

The next submissions were made by Michael Egan, Board of Management of a local primary school, and Liam Madden, on behalf of Andrea McCausland. Mr Egan cited the school having educated all pupils in a way that is close to nature for over 170 years and said the “natural unspoilt environment surrounding the school is like an extended classroom”, before noting the damage caused by the proposed development to wildlife, cannot be undone.

Mr Madden cited the use of photomontages by BnM when making their submissions as a “gross misrepresentation of the visual impact” the development will have. He also questioned the validity of studies submitted.

Solicitor Gabriel Toolan, speaking on behalf of environmental activist Peter Sweetman, was next in line to make a submission and spoke in depth on an issue he felt was “for the national courts to decide”. Mr Sweetman expressed his concerns at a lack of environmental impact assessment having been carried out, as well as the ongoing surveys into Merlin populations. He also reaffirmed concerns at the misrepresentation of photos showcased at yesterday's hearing.

Mr Sweetman then reiterated concerns on ‘the risks posed to the Curlew’, gaps in the bird surveys and the scant survey carried out regarding whorl snail populations. Concluding Mr Toolan on behalf of Mr Sweetman called for the application to be dismissed.

Cathaoirleach of Longford County Council, Micheál Carrigy, then lodged his own submission, calling on Bord na Mona to return the bogs back to the people of Longford.

“I feel the bogs belong to the people.” he said.

“This is a huge opportunity to create a tourist attraction in Longford. This development will have a negative impact on tourism.”

Mr Carrigy said he is also ‘at odds’ with the Department as to why updated environmental guidelines have not yet been implemented. He then called for the target date for a decision on the development to be put back from the July 31 target date.

“Any decision should be based on these new guidelines.”

Following a submission from local Longford man John Duffy, who called on an Bord Pleanala to consider the personal impact of the proposed development, and Andrew Kiely, the hearing went to recess. Later today, cross questioning will take place.