Not even age stopped Ardagh's Anne Byrne from casting her vote 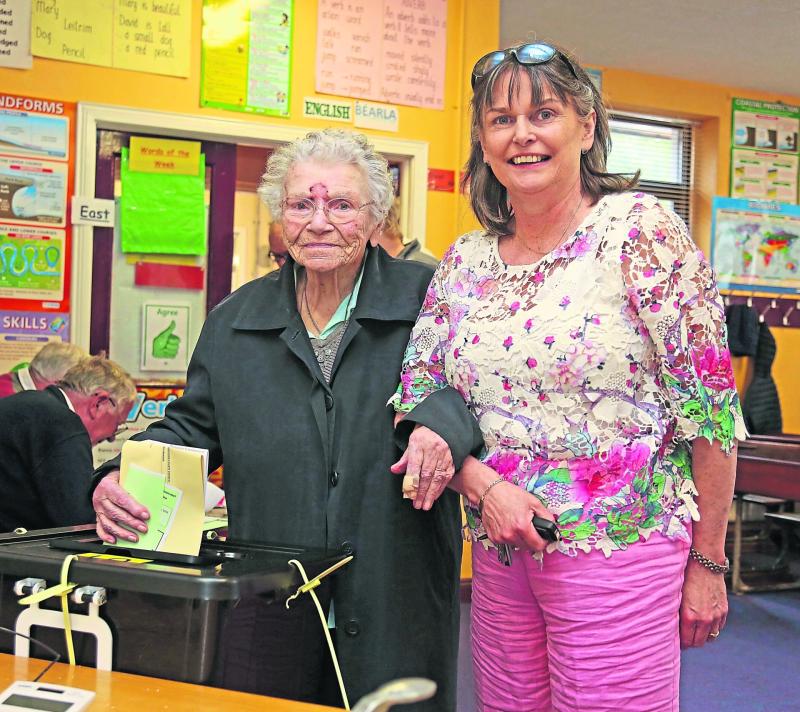 Anne Byrne pictured with her daughter Una casting her vote in Ardagh on election day, Friday May 24, at the age of 104. Anne is Longford's oldest surviving citizen PICTURE: SHELLEY CORCORAN

Anne Byrne, Longford’s oldest citizen, took time out of her day on Friday, May 24, to cast her vote in the Local and European elections.

Anne, who turned 104 on July 18 last year, was born in Carrigeen Co Longford in 1915. She carried out her national school education in Lenamore and St Elizabeth’s Edgeworthstown, before attending St Joseph’s Convent of Mercy in Longford town.

Anne then went on to complete a BA and B Comm. in University College Galway, now NUIG, where she remains the oldest surviving alumni.

Anne then began her career in England and Wales working as a teacher during World War II, before she moved to New York to work with the Reader’s Digest Education Department.

Anne made her long-awaited return to the Emerald Isle in 1955, where she married Thomas Byrne and moved to Ardagh, a place she resides to this day.

During her later career, Anne also spent time working as a teacher in Mean Scoil Mhuire in Longford, where she retired as Vice Principal in 1980.

Anne also launched her own book in 2016 ‘The Myths, Legend and History of Ardagh through the ages’, which was officially launched in the Ardagh Heritage and Creativity Centre.

Anne proved once again on Friday, May 24, that age is only a number, as she fulfilled her duties as an Irish citizen at the age of 104.